Out Of The Loop: Dollywood announces new resort and a dual-launch coaster 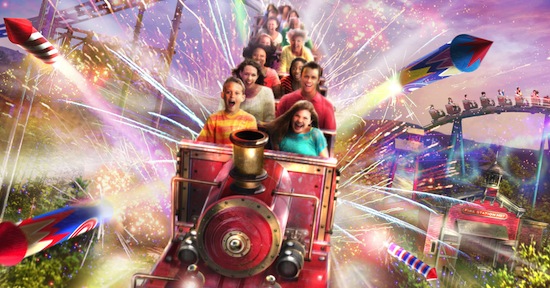 Pigeon Forge, Tenn. – At the base of the Great Smoky Mountains is the hometown of country superstar Dolly Parton. In 1986, she opened Dollywood. Since that time, the theme park has grown. It has added multi-million dollar attractions and a water park. Today, Dollywood announced a major park investment of $300 million that will be spent over the next 10 years.

The first phase of the investment will be a new roller coaster. Fire Chaser Express will be a nod to the fire fighters. This is a Gerstlauer dual-launch family coaster, the first of its kind. It will accelerate 0-16 mph (or as indicated in the teaser video 0 to hero) in 1.1 seconds and 0-20 mph in two seconds. It will reach a maximum speed of nearly 35 mph with a maximum height of 79 feet. It will have two helices and six zero gravity moments. It will truly be a family ride in that guest only need be 39 inches tall to ride. The coaster is expected to open next spring 2014.

The second phase of the improvement will represent a major step forward for the Dollywood property. Dollywood owned log cabin lodging is about two miles away with hundreds of non-park-owned lodging up and down the parkway. What has been missing is a real all-in-one resort experience. That will all change in 2015 with the opening of the 300-room DreamMore Resort. Dolly says she hopes the setting of the Smoky Mountains and Dollywood park help guests to “dream more”. Additionally, she noted that indeed this is a hotel that will have a relaxing, down-home feel and hopes that when guest go to sleep they will “dream more”. The resort will be situated on 100 acres, just a stone’s throw from Dollywood. It will offer many areas to relax including fire pits, swings and hammocks. Families will be able to participate in activities that promote bonding like hiking in Smoky Mountain National Park. The resort will have an indoor and outdoor pool complex, spa and a full-service farmhouse-style restaurant. The resort opens summer 2015.

What will the remaining eight years and the balance of the $300 million bring? Only time will tell.

Dollywood’s Smoky Mountain Christmas to be bigger than...

Dollywood’s branding, Parton’s name, vision and inspiration, are assets to behold. It makes the destination much more interesting than the majority of the other theme park/ destination complexes. Her first resort is a very important addition.

Agree Marcos. And, she is very involved. It is her name after all. She makes all the major announcements and seems sincerely proud to be part of it all.