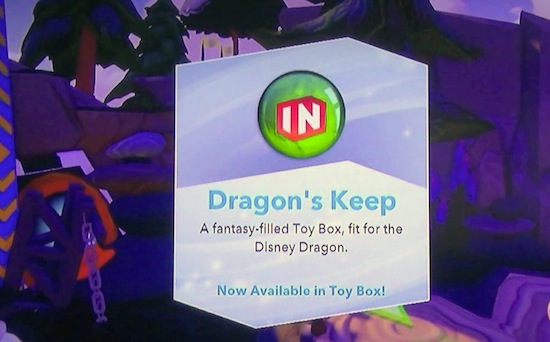 The new Disney Infinity video game was released this week on all the gaming systems and has been very well received. The game comes with a base that you use with the many Disney character figures and Power Discs that are sold separately. When you place a figure or disc on the base, it’s added to the game. But it’s not well known that you can also add the Disney Dragon and more to the game if you’re one of the lucky ones who has tested Disney Parks’ new MagicBands.

The MagicBands are a new feature coming to Walt Disney World, which will replace guests’ tickets, room keys, Fastpasses and more. (Read more about them Here.) Guests staying at certain Disney World resorts have been offered the ability to test the MagicBands over the last few months. They’re expected to fully launch later this year. So you may need to wait until your next Disney World vacation to get your hands on one. Or at least book your next trip. (The bands are mailed to you ahead of time.)

We read about this ability at Zannaland.com, so we had to try it out for ourselves. As reported, when we touched a MagicBand (supplied by MouseSteps.com) to the base hooked to our XBOX 360, a message popped up on our television screen saying “Dragon Gate” was added to our Toy Box (Toy Box is the open environment building area of the game). Once we placed the Dragon Gate, a new toy appeared called Dragon’s Flight Sky. And sure enough, a fire breathing Disney dragon, just like the one that flew over New Fantasyland late last year, appeared in the sky of the game. So we hopped in our Dumbo ride vehicle and chased him down. But we also discovered the MagicBand gave us a whole new prebuilt Toy Box to play in called “Dragon’s Keep”.

Take a look at our video of the dragon and the new Dragon’s Keep Toy Box area:

If there’s any doubt that the dragon in the game is the same one that flew over the Magic Kingdom last year, here’s our video from the New Fantasyland VIP party the night it flew:

We were playing the game with the Sorcerer Mickey figure that was given out early at the D23 Expo but you should be able to unlock the dragon no matter which figure you’re using, as long as you have a MagicBand.

The dragon and all its components stay in your game even after you remove the MagicBand and restart the game, so you should be able to just borrow a friend’s band if you don’t have one yourself.

Out Of The Loop: Dollywood announces new resort and a dual-launch coaster

Just got our magic bands and tried this…. didn’t work, don’t know if you need to have mickey or what but couldn’t get anything

That’s weird Erin. We tested it with one of the figures that came with the system too and it still worked for us. What system did you try it on? Were your MagicBands used as your park tickets or just hotel key?

Out of The Loop: New Madagascar and...