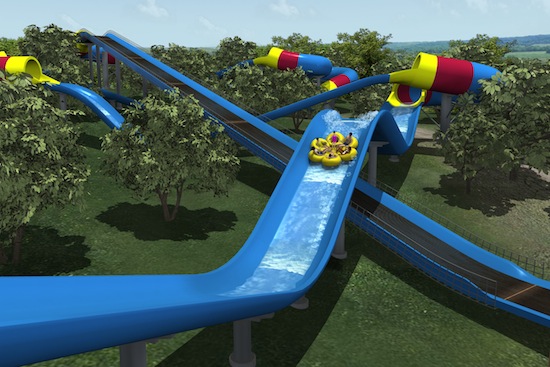 Santa Claus, Ind. – 75 miles west of Louisville, Ky. is the town of Santa Claus, Ind. Fittingly, the amusement park that resides in Santa Claus is named Holiday World. Each different area of the park is themed a different holiday. The water park portion of Holiday World is Splashin’ Safari. These two parks, that you enter with one admission fee, most definitely provide big time thrills in a spotless-clean environment and hometown atmosphere. And, where else can you get free parking, free soft drinks and free sunscreen?!

Today they announced their largest park investment yet with a $9 million price tag. Opened in 2010, The Wildebeest is currently the longest “water coaster” in the world. (The Orlando equivalent would be Crush ‘n’ Gusher at Disney’s Typhoon Lagoon.) In 2012, the title of longest water coaster will pass on to a brand new water coaster – Mammoth!

So my speculation from earlier this week was, well, WRONG! What can I say; I am a wooden coaster fan. But, I think this looks like loads of wet fun!

Let’s go to the stats:

DESCRIPTION: Mammoth will be the World’s Longest Water Coaster when it opens in May 2012. Using HydroMagnetic technology, the six-person boats will fly up a series of hills utilizing linear induction motors (LIMs). The water coaster begins with a 300-foot conveyor ride “lifthill,” followed by a five-story drop at a 45-degree angle. The ride includes a total of six drops, adding up to 282 feet of total “drop.” Mammoth’s length is the greatest of any water coaster in the world: 1,763 feet, a third of a mile.

DROPS/ANGLES: The first drop is 53 feet, at a 45-degree angle. Together with five additional drops, combined length of the “drops” is 282 feet.

RIDE HEIGHT: Mammoth is 69 feet tall, from the lowest to the highest heights.

SPEED: To be determined during Spring 2012 testing.

RIDE TIME: To be determined during Spring 2012 testing.

STAIRS: None! Riders begin at ground level and ride up a conveyor.

Aquazoid Amped will make a big splash at...

Behind the Scenes: Wheel of Fortune tapes...