Out of the Loop: Holiday World to build largest water coaster

Even if Orlando is center of the amusement park universe, there are great and wonderful happenings everywhere. These amusements occur in little towns with names like West Mifflin, Penn. and big cities like the greater Los Angeles area. Fun is had in exotic locales like Dubai and Australia. There is even plenty of amusement park news generated right here in my hometown of Cincinnati, Ohio.

If you are a subscriber to Orlando Attractions Magazine (and if you aren’t, why not?), you may have read my column toward the back of the magazine. Out of the Loop covers the goings-on at attractions across the United States and the world.

The idea behind the blog is that many of you, like me, live outside of Orlando. While most of us can’t get to Florida more than once a year, it doesn’t mean our lives are void of amusement park thrills. On the contrary, I contend that there are many thrills to be had outside Orlando. For most, a theme park is within a tank of gas away. We have an ongoing need to know “what’s up?” in the amusement industry. Breaking out of the confines of a magazine page, the Out of the Loop online column will seek to cover some of the news from outside Orlando. Mind you, I didn’t say all the news. However, I’ll definitely cover the big announcements, but also the interesting news, and perhaps some off-the-beaten-path stories.
– Andy Guinigundo 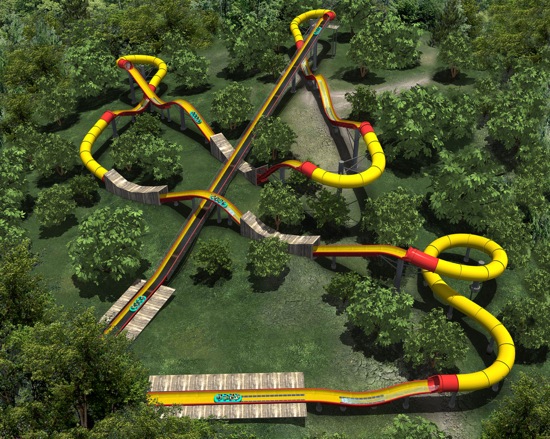 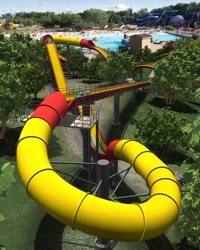 About 75 miles west on Interstate 64 from Louisville, Ky. is Santa Claus, Ind. Santa Claus is home to Holiday World theme park and Splashin’ Safari, its water park. This is a one-price, two parks type of adventure. The theming of Holiday World is obvious. Instead of Tomorrowland or Fantasyland, they have Christmas, Thanksgiving, Halloween, etc. and all the associated themes. Splashin’ Safari has African safari theme. This park is the real deal. For example, their three wooden coasters are as thrilling or more thrilling than anything out there.

The parks have a very friendly, welcoming feel. Many times they’ve been voted the cleanest park in the world. It’s common to see the park matriarch, Pat Koch, in the park making sure everything is just right – even picking up a stray food wrapper or cleaning off a table or counter.

I suppose someone forgot to tell the Koch family (son Will, is president of the park) that we’re in a recession. They give guests free soft drinks, free sunscreen and free parking. Rather than hunker down and weather the financial storm, they instead decided to build the world’s tallest water ride in the Pilgrim’s Plunge that debuted this spring. The incredible Voyage coaster is the park’s biggest investment. The Pilgrim’s Plunge was second until now.

On Thursday, Holiday World/Splashin’ Safari announced the $5.5 million Wildebeest that will be the world’s largest water coaster. It’s supposed to open in May 2010. The traditional water slide is propelled by gravity – what goes up must go down. In addition to gravity pulling down, a water coaster has mechanisms that propel riders up hills much like their dry track and train coaster counterparts. A similar, but shorter ride in Orlando is Crush ‘n’ Gusher at Typhoon Lagoon.

The ride will start with a conveyor belt ride promptly followed by a 45 degree drop. During the remainder of the ride, linear induction motors or LIMs will propel the four-rider rafts up seven more hills. The LIMs are a similar technology to that employed in the initial launch of the Rock ‘n’ Roller Coaster at Disney’s Hollywood Studios. It will reach a top speed of almost 25 mph. The ride will cover 2.1 acres, have a ride time of two minutes and 30 seconds, and will be 1,710 feet in length, making it the largest water coaster in the world.

The fall is like Christmas for amusement park fans. Many of the new ride announcements start to pour in now. Look for more Out of the Loop posts here on the Orlando Attractions Magazine blog each Sunday.

Stars in the Parks: Dan Rather at Epcot

Stars in the Parks: David Cook at Magic Kingdom

Looks awesome! Holiday World continues to amaze me by making all of the right decisions.