Out of the Loop: Lego memorial, Disney Shanghai and no Nick park 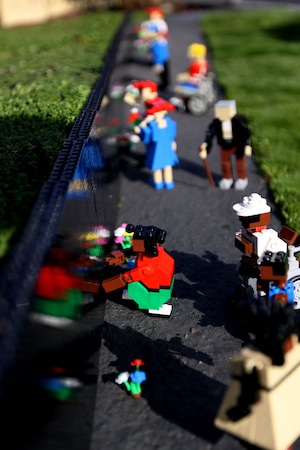 Carlsbad, Calif. – While many attractions around the U.S. have ongoing specials for military and sometimes family, I haven’t personally heard of too many Veterans Day events that are taking place in the parks. Well, Legoland is honoring veterans by dedicating a Vietnam War Memorial Lego model on Veterans Day. I have sometimes implied that it is “easy” for Legoland to build new displays for current events. Perhaps that downplays the time and artistry involved. Let examine some of the stats for this display:

• Six Lego model builders were utilized.
• Sixty hours to create the model.
• The display is 10 feet long.
• More than 2,000 Lego bricks were used.
• The model’s orientation is true to life – one wall faces the Washington Monument and the other the Lincoln Memorial. These monument models are in place now in “mini” Washington D.C.
• “Flat-faced” bricks were used instead of traditional Lego brick to give the illusion of writing.

The original memorial was dedicated on Nov. 13, 1982. It was picked among more than 1,400 designs. It was designed by then Yale architecture student Maya Ying Lin who hails from Athens, Ohio. The wall was specifically designed to memorialize those who lost their lives in the war or are officially unaccounted for without making a commentary on the controversial war itself. There are 58,261 names inscribed on the wall. The National Park Service that maintains the grounds collects nonperishable items that are left at the wall daily, catalogs and stores the items.

The mini Vietnam Memorial joins the Lincoln Memorial, Washington Monument, and the Iwo Jima Memorial along with other Washington D.C. landmarks in the Miniland USA area of Legoland.

Disney one step closer in Shanghai

Shanghai, China – In the April/May issue of “Orlando Attractions Magazine”, I reported that Han Zheng, the mayor of Shanghai had held a press conference in January in which he stated that Shanghai and Disney had come to an agreement on the “major issues” involving a Disney park coming to Shanghai. This announcement came after several years of rumor and failed negotiations. Here we are almost a year later finally receiving further word. The velocity of the negotiations has been slow motion glacial, but here are the latest details:

Disney submitted a Project Application Report (PAR) to build a Disney theme park in the Pudong district of Shanghai. Disney reported last week that authorities in the central government of China have approved this application. This approval now allows for yet another “final” set of negotiations to be completed between Disney and their Shanghai partners. Disney states that development and planning can begin on a Magic Kingdom-style park after this agreement has been reached.

This park would be the third Asian Disney resort following the Tokyo Disney Resort that includes Tokyo Disneyland and Tokyo DisneySea, and Hong Kong Disneyland. The Hong Kong park is in the process of a major expansion itself. 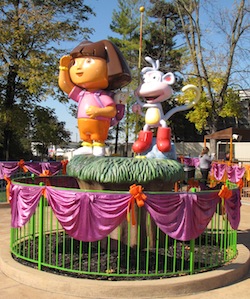 New Orleans, La. – It wasn’t too long ago that I posted in this very column that Nickelodeon, Southern star Amusements and the city of New Orleans had come to an agreement to open the first stand-alone outdoor Nick theme park on the site of the old Six Flags New Orleans.

The Six Flags park had been under water post-Hurricane Katrina and had simply not reopened. Southern Star Amusement had been the driving force behind the opening of an amusement attraction on this site since a few years after the storm. It had previously resigned to the fact that there simply was not enough interest and capital. They posted a press release on their Web site stating that they would keep the door open in the future if a suitable partner and renewed interest arose, but at that time, they were ending their quest.

Along came Nickelodeon. In August, Nickelodeon agreed to lend their brand to the new/refurbished park. Apparently no local public funds were to be used. It was to be a combination of government bonds and Southern Star’s money. Somewhere along the line, Southern Star dropped the ball.

It was announced in late October that Southern Star had failed to meet an investment deadline. They were supposed to have deposited $500,000 in “good faith funds” in an escrow account by late October but simply did not. The good faith funds would have allowed them access to $100 million in government bonds. Nickelodeon, feeling the ship beginning to sink, jumped off before they got wet. They ended their licensing deal with Southern Star early this week.

I wish the city of New Orleans continued growth and recovery. This is certainly a setback. I believe everyone deserves theme park fun within a gas tank’s distance. Unfortunately, although it seems Southern Star had big ambitions and good intentions, they never really had the funds to back up the dream. As for Nickelodeon, who knows where they will turn next? They were nicely placed in kids areas in several Cedar Fair parks, but no more. It seems unfortunately but there are no winners here.