Out of the Loop: Legoland Hotel in California now open – Videos/Photos 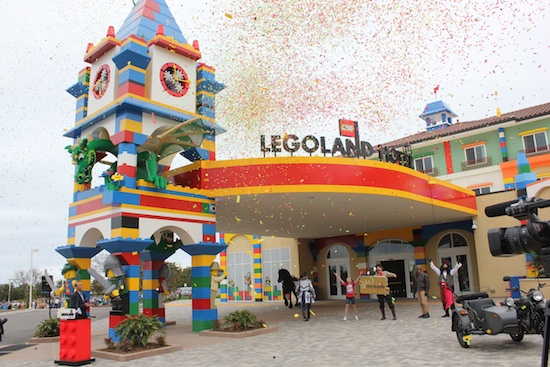 Carlsbad, Calif. – April 5, 2013 marked the Legoland Hotel grand opening at Legoland California Resort. This three-story, 250 room hotel represents the largest expansion in the resort’s history. Each and every room is Lego themed after one of three popular Lego lines: pirate, adventure, or kingdom.

Every room has been designed with kids in mind, with a separate sleeping area of their own which includes a bunk bed, trundle bed and television. The rooms completely immerse guests in the Lego world complete with Lego models, wall decorations, themed bedding and even the carpet is Lego themed. Three thousand five hundred Lego models can be found throughout the hotel comprising more than three million Lego bricks. The Lego theme doesn’t stop at the rooms, Lego play areas are found within the hotel and the main entrance is guarded by a 400,000 Lego brick fire-breathing dragon. The restaurants are also Lego themed.

The hotel joins a resort comprised of Legoland, Legoland Water Park and Sea Life Aquarium. Hotel guests will be allowed early entry into some areas. The Legoland California Resort is located in Carlsbad, California, 35 miles north of San Diego and 90 miles south of Los Angeles.

Tour of the lobby, restaurant and pool:

Top 10 videos to watch to celebrate...