Out of the Loop: New Legoland Hotel in California looking for Junior Concierges 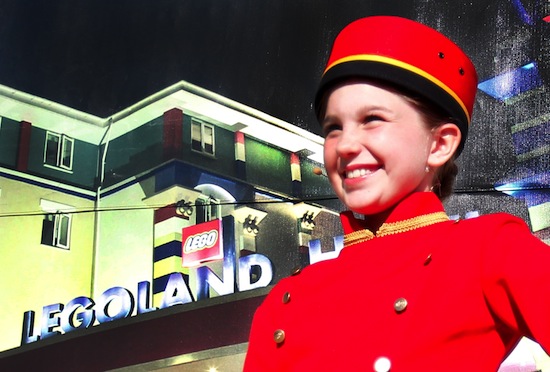 Carlsbad, Calif. – Ahead of the April 5, 2013 opening of the first American Legoland Hotel at the Legoland Resort in California, a national search is on for Junior Concierges. Prospective concierges ages 8 to 12 are asked to submit an essay of 50 words or less to Legoland.com/JuniorConcierge by Feb. 14, 2013. Winners will be chosen by Feb. 28, 2013.

Winners and their families will receive a weekend stay at Legoland Hotel, two-day Resort Hopper tickets, and of course, Lego products. At an initial visit, winners will be fitted for a uniform, meet resort staff, and receive full “job” training. Training will include a full orientation to the hotel and all of Legoland California Resort. The newly trained Junior Concierges will then return another weekend prior to the end of 2013. During their return visit, they will be able to share with other young guests, all that is cool about the Legoland Resort fulfilling their duty as Junior Concierges.

The completion of the 250-room Legoland Hotel marks yet another addition to the growing Legoland California Resort that currently includes Legoland California, Sea Life Aquarium and Legoland Water Park. The hotel will include interactive Lego décor, pool, restaurant and event space. Each room will be themed to one of the three most popular areas of the park – Pirate, Kingdom or Adventure.

There is no official word as to when a Legoland Hotel might be coming to Florida. However, the development of Legoland Resort California has somewhat previewed what we have seen eventually come to Florida.