Out of the Loop: SeaWorld San Diego getting a unique Manta coaster 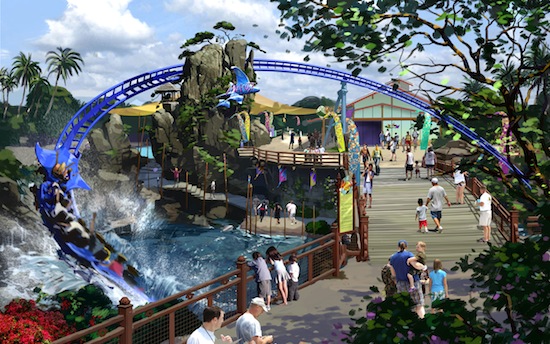 Manta opened in SeaWorld Orlando on May 22, 2009. The flying-style roller coaster has been thrilling guests ever since. A flying coaster suspends guests with restraints with the ride vehicle overhead – headfirst, face down. Manta is SeaWorld Orlando’s fourth coaster.

SeaWorld San Diego has been lacking in the thrill ride department. Right now it only houses a single coaster type ride. Journey to Atlantis is a hybrid coaster/water ride. A similar ride is present in SeaWorld Orlando too. Manta may indeed be the thrill ride SeaWorld San Diego guests have been craving. However, despite the shared names, it appears that the two Mantas are two different fish tales.

Designer/Builder
Manta Orlando was designed and built by renowned thrill coaster builder Bolliger & Mabillard (B & M). Their resume includes coasters like Diamondback, a mega coaster at Kings Island in Cincinnati, Ohio built the same year as Manta. They also built the inverted coaster Goliath at Six Flag Fiesta Texas in San Antonio. The Central Florida coasters built by B & M include SheiKra, a diving machine with a 90 degree vertical at Busch Gardens Tampa, and Kraken, a floorless coaster, at SeaWorld Orlando. There are a couple of coasters down the street from SeaWorld too – The Incredible Hulk and Dragon Challenge at Universal’s Islands of Adventure.

Mack Rides has been designing coasters since 1920, but actually started building carriages in 1780! They have signed on to design and build Manta in San Diego. Mack is not a stranger to SeaWorld in that it designed the Journey to Atlantis in Orlando and San Diego. Mack manufactured each of the Dark Knight wild-mouse style coasters at Six Flags parks in Illinois, New Jersey, and Massachusetts. Additionally, in conjunction with Walt Disney Imagineering, they manufactured Mulholland Madness, also a mouse coaster located in Disney California Adventure. It is currently closed and when it reopens this year will be re-themed and re-named Goofy’s Sky School. Mack literally has dozens of coasters, dark rides, water rides and people movers to their credit around the world. Lest you believe that Mack is only capable of generic mild to moderate thrill rides, let’s examine the Blue Fire at Europa Park in Rust, Germany. This steel, launched, inverting mega coaster opened in 2009. This 124-foot-tall beast launches riders 0 to 62 mph in 2.5 seconds, inverting them four times over the 3,464-foot-long track.

What’s similar?
In Orlando, Manta is integrated with 10 aquariums with a total volume of nearly 250,000 gallons. More than 3,000 living sea creatures occupy this unique habitat. In San Diego, the existing attraction Forbidden Reef will be combined with the new ride. In this 100,000-gallon attraction, guests are able to touch and feed the rays and other sea animals. 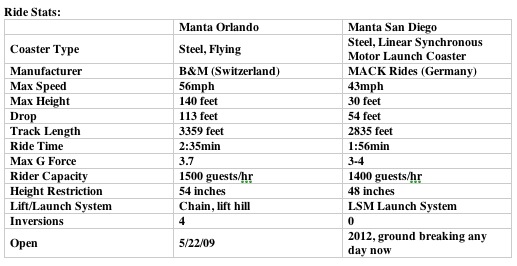 Here’s a ride-through video of Manta in Orlando:

Resort Report: Getting away from it all...