Out of the Loop: Seeing Disneyland's Small World changes first-hand 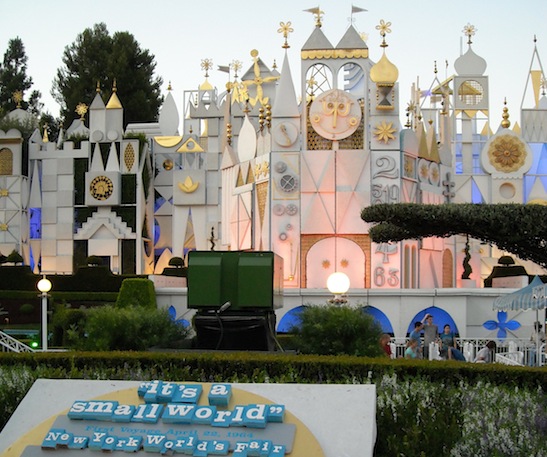 First off, I would like to thank my colleagues for bringing such complete coverage of Disney’s D23 Expo from Anaheim. Out of the Loop took a mini hiatus during this time since much of the coverage was news from outside of Orlando, which is this column’s focus. While, I was unable to make it to the expo, I did find myself in Disneyland the Saturday of the D23 Expo. I was fortunate to get a side trip out to Anaheim when my other job took me to Southern California that weekend.

This was my first trip to Disneyland. Many people don’t remember their first trip to Disney World or Disneyland as this is often an experience tucked away in our childhood memories. Rather we often harbor a generalized good feeling that we carry on to adulthood and eventually hope to pass on to our children. For me, there are several rides and experiences at Disney that conjure up this nostalgic good feeling. These include: Pirates of the Caribbean, The (original) Enchanted Tiki Room, The Carousel of Progress, If You Had Wings, Main Street Electrical Parade and it’s a small world. 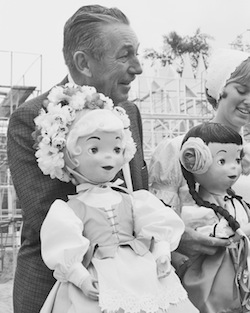 Say what you want about Small World – the song is annoying; the ride is long; it’s boring. To me, the ride represents the beauty of the innocence of childhood. It is certainly a reflection of Walt himself. It was a ride that he personally developed. I have fond memories of each of my children riding Small World when they were around 1-year-old, gazing around in wonder and amazement while having vague memories of doing the same as a child.

Small World went under refurbishment out in Disneyland in January 2008 and re-opened in February this year. There was much controversy about the changes that occurred within the ride. First off, it was rumored that the boats had been changed to accommodate a heavier average person to prevent bottoming out. Maybe, maybe not; this has no bearing on the ride experience although preventing a boat from getting stuck is definitely a positive. The real controversy came in the addition of Disney Characters into the ride – Cinderella, Woody, Stitch, Donald Duck, Nemo and 24 others. 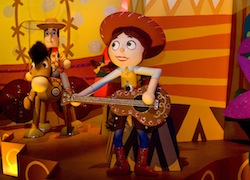 I was with the group that strongly opposed such a change. In fact, surviving family members of the ride’s main artist, Mary Blair, vocally came out against the changes. They cited the fact that blatant marketing would “bastardize” the integrity of the ride. One of the ironies of the change was that the famous rain forest area was figuratively cut down and replaced with characters from Toy Story.

With these issues in mind, Small World was high on my list of must-ride attractions during my trip, knowing that I would be limited to only a handful. As the sun began to set, my wife and I found ourselves toward the back side of the park, close to Small World. Near the entrance of the ride, a plaque commemorates the ride’s historic first voyage at the New York World’s Fair, April 22, 1964. We made our way through the outdoor queue area and walked right on to the next available boat. Many of the queues in Disneyland are uncovered. Apparently, afternoon thunderstorms and crazy heat and humidity are not common in California.

While I could focus on every tiny similarity and difference between California and Florida, I feel that this has been done elsewhere. (Check out the Wikipedia entry for ‘it’s a small world’.) I tried to keep an open mind as the boat rounded the bend and into the ride. However, the pessimist in me wanted to not like the changes. Soon, though, I found myself saying: “Look at Peter Pan”, “Hey it’s Cinderella” and “I found Nemo”. I laughed about being able to voice my over-used Finding Nemo joke to my wife. My wife and I were definitely smiling as we made our way through the store that the ride exits near. We ran off the ride in search of Roger Rabbit.

Did I love the changes? No.
Would I want them to come to Florida? No.
Was it as bad as I thought it would be? No.

I would surely ride it again and I hope to take my kids on this incarnation of the ride some day. I think the Small World changes do hold on to history while attempting to move forward, trying to appeal to a broader audience. I think Disney cares what the fans think, but they don’t ask us for our blessing. If the Imagineers tried to please fanboys like me all the time, it would be impossible to move forward. Failing to move forward and evolve would be worst sin of all. 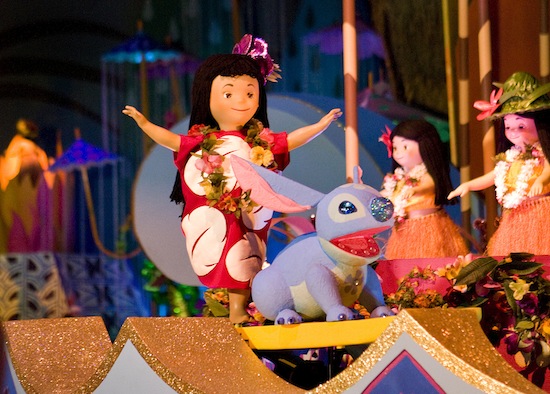 The rainforest was not “cut down”. It was just relocated next door to the South Pacific section.

And I doubt that the letter that Kevin Blair wrote are real. To this day, I still think that they’re phony, due to its constant use of bad language and their refusal to remain constructive and dignified in their criticisms. I feel that it was just written by the rabid change-hating Disney purists (including the ones at the always-awful Re-Imagineering blog), pretending to be Kevin Blair and family in yet another pathetic attempt to try to get their way and make their opinions be the law.

The additions to DL’s Small World are awesome and don’t ruin it at all. I feel very sorry for the poor Imagineers that have fallen victim to such irrational mud-slingings.

Thanks for the comments. If indeed the letter(s) were fakes, I’m sorry to have been caught up in that hype. Several very reputable sources reported the letter as real.

As for the rain forest, you are correct – it is now in the last part of the South Pacific room on the left. Let’s call it a bit of “deforestation” as it is smaller than previously!

Again, to me, the changes were acceptable and well executed.

Out of the Loop Andy

In regards to the letter… Whether it was real or not, it was very badly-written either way. The constant bad language and overly-insultive nature of that letter only made it impossible for anyone to take it seriously. If Kevin Blair is indeed like that in real life, he should’ve acted in a more constructive and professional manner in his approach. After all, one can catch more flies with honey than with vinegar.

As for the rainforest, that whole “Save the Rainforest” campaign was nothing more than a false alarm. Even though the scene is smaller than it was previously, I don’t think I would consider it as “deforestation”.

The extremely one-sided natures of some Disney fanboys can be a threat to tolerance and don’t seem to realize that their overly-negative behaviors can hurt the Disney fan community, not elevate it.

The deforestation crack was tongue-in-cheek. Sorry, sarcasm doesn’t come across well in this format.

You are correct, too much negativity and criticism has no place at the happiest place on earth. In the end, I happily defer to the wisdom of the Imagineers.

While some online commenters of all types and opinions will go too far at times, any suggestion that everyone should just accept bad art and not say anything is ridiculous. I haven’t seen the Small World changes at DL, but I have seen the changes made to the Haunted Mansion at WDW. They are bad and I will not fail to say so. I will not just blindly trust the imagineers when they create such faulty work. They are capable of much better work, as they have proven often. This does not mean that we shouldn’t mention their missteps.