Out of the Loop: Sherman Brothers honored with a window at Disneyland 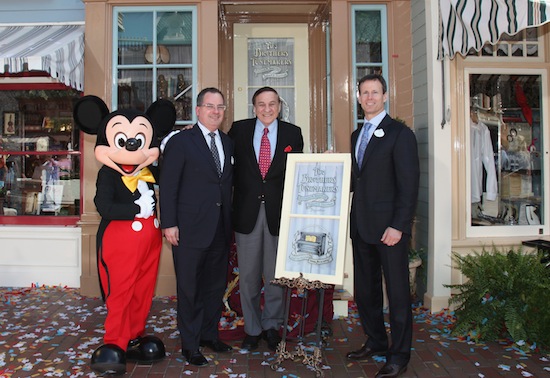 Anaheim, Calif. – It has been a long tradition that individuals who have made significant contributions to Disney are honored with a window on Main Street USA at Disneyland and Disney World’s Magic Kingdom. The Sherman brothers were so honored this past Thursday, March 11, 2010.

The casual amusement park or Disney fan may not recognize their names, but there is no doubt you’ve heard their music. Let’s examine a sampling of their contributions:

In the parks:
• It’s a Small World
• In the Tiki, Tiki, Tiki Room
• From the Carousel of Progress – The Best Time of Your Life and It’s a Great Big Beautiful Tomorrow
• One Little Spark from Journey Into Imagination
And more …

At the movies:
• Mary Poppins
• The Jungle Book
• Chitty Chitty Bang Bang
• The Aristocats
• The Many Adventures of Winnie the Pooh
• The Tigger Movie
• The Sword in the Stone
and more…

It’s not as if Robert and Richard Sherman have never been honored. Here’s a short list of their hardware: Academy Awards, Grammy, Christopher Awards, Laurel Awards, Golden Globe nominations and a National Medal of Honor. However, of all the awards, the only one we can go see anytime we want is the window on Main Street USA in Disneyland.

Thank you for the music.

Megacon brings comics, celebs and other cool stuff to Orlando this weekend