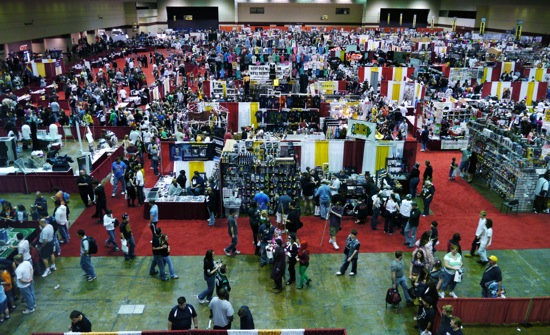 MegaCon 2010 was held this past weekend at the Orange County Convention Center and it was huge. The actual space the event took up in the convention center didn’t seem any smaller or larger than past years, but the crowds seemed at record levels on Saturday. We were told they almost reached capacity and were close to turning people away.

One side of the hall housed all of the comic book artists. The main section was filled with vendors. Here you could find action figures, comic books, clothing, tattoo stations, movie props and more. Other sections included a blood donation area, a video gaming set-up, Legos, role playing games and play sword fighting.

Thanks to Ricky Brigante for visiting on Saturday and getting the video. The photos below were taken on Sunday.

Out of the Loop: Sherman Brothers honored with a window at Disneyland

Meet the Guardians of the Galaxy: Cosmic Rewind’s...