Out of the Loop: The rise of the wing rider coasters 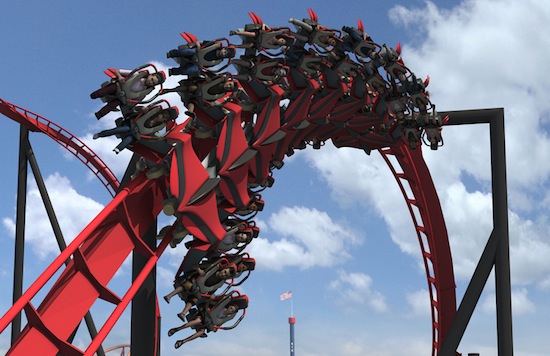 This week, Six Flags Great America near Chicago announced that the X Flight roller coaster would be built with an expected debut date of 2012. This announcement marked the third major announcement of a wing rider coaster being constructed for next year. With the opening of Furius Baco (Intamin) at PortAventura in Catalonia, Spain in 2007 and Raptor (Bollinger & Mabillard – B&M) at Gardaland in Lake Garda, Italy this year, and now these three, I am going to take it upon myself to “officially” announce a new coaster craze.

What is a wing rider coaster? The ride vehicle is what is unique about these next-gen coasters. If one were to picture a bat (the flying animal, not the sports implement), that nails a good mental image of the wing rider coaster ride vehicle. The body of the bat is what attaches to the track and some or all of the seating is out in the bat’s wings.

The B&M designed X Flight and what appears to be its cousin, The Swarm at Thorpe Park in the UK, are currently announced for 2012. The Sky Rush at Hershey Park is Intamin’s newest take on the wing rider coaster offering two different experiences. The Sky Rush will have two floored seats (back to my analogy) on the bat’s body and one floorless seat on each wing. This will be Hershey Park’s 12th coaster.

How’s the ride? I haven’t been to Spain or Italy, so I do not know. I would guess it is the newest twist on why people love roller coasters. You certainly will feel speed and turning that produce that adrenaline euphoria. I would also guess the wings “flapping” are what give these rides a new scream-inducing dimension. Time will tell if these will become the next everyone-has-got-to-have-one coaster.

They Copied Hersheypark! Hershey announced it before!

I think its a great idea that parks across the world are getting the wingrider. But I have to say that Thorpe Park desgined the same design as Six Flags Great America.

I know this because I live in the UK and go to Thorpe a couple of times a year. Don’t believe me, look at this link:

It will be interesting to see how similar the designs at Thorpe, Six Flags, and Dollywood will be as they are the same manufacturer. I think that each park’s coaster will be unique in some way. And, I venture to guess, there won’t be too many people who will make it to Chicago area, Pigeon Forge TN, and Thorpe Park in UK.

I did Raptor in Italy and must say that the ride is great! Not much of an adrenaline kick though. What makes this ride so special is the theming (you get the feeling that you will crash into a lot of supports, trees, buildings etc… not to mention the fountains!!!! Since that one was build by B&M you get of course the B&M softness during the ride unlike the one in Spain where they launch you (which feels great) but after that only the first seat will have a smooth ride! All other seats shake you like if you were on an old woody. Anyway, the three new coasters for 2012 are all B&M so I guess they will be OK. I do hope the theming is as great as the one in Italy!!!!! https://www.youtube.com/watch?v=Xmxq7TBiCiU