Out of the Loop: WindSeeker will take riders 300 feet up at four Cedar Fair parks 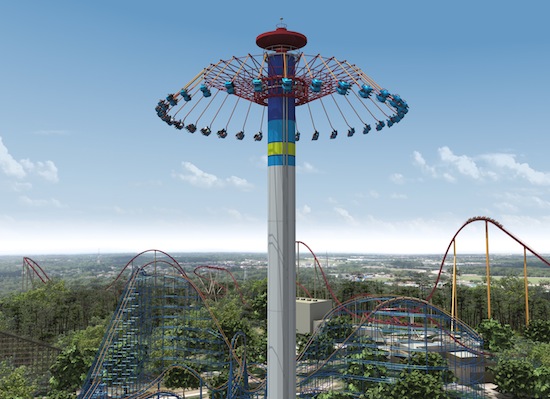 The $5 million Mondial-designed ride will be 301 feet tall or about 30 stories. Riders will sit in two-person seats with a lap bar and a seatbelt with their feet dangling. As the ride spins, it accelerates to 30 miles per hour; it simultaneously slowly ascends the tower over about 50 seconds. It will spin at the top for about a minutes and then descend in about 50 more seconds. While spinning, the seats will reach an angle of 45 degrees. Riders will need to be about 48 inches tall to ride.

The ride is expected to debut in spring of 2011 at all four parks.

Video: Rendering of WindSeeker at Cedar Point in Sandusky, Ohio

A similar ride called Star Flyer can be found at Magical Midway on International Drive in Orlando.

Mask and vaccine updates at the parks,...