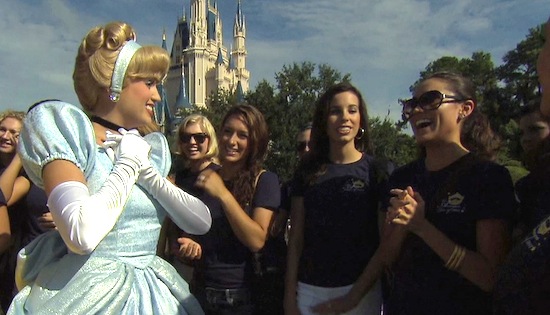 All 53 contestants for the title of Miss America 2011 visited the Magic Kingdom today. Representing 50 states, the District of Columbia, Puerto Rico and the U.S. Virgin Islands, the ladies restarted the Miss America tradition of walking together down Main Street toward Cinderella Castle.

Mickey Mouse, Minnie Mouse, Cinderella and Belle met the 53 contestants for photos before the women broke up into smaller groups to see the rest of the park. Through the day, guests may have spotted contestants on Big Thunder Mountain Railroad, Prince Charming Regal Carrousel, Mad Tea Party, Dumbo the Flying Elephant and other attractions.

The 53 Miss America contestants also recorded interviews that are scheduled to appear in the 2011 Miss America Pageant broadcast. Returning to ABC for the 90th anniversary of the pageant, the competition will broadcast live from Las Vegas on Saturday, Jan. 15.

The 53 Miss America 2011 contestants are in the Orlando area to attend the annual Miss America Outstanding Teen Competition, as they did last year when they visited Universal Orlando.

Out of the Loop: WindSeeker will take riders 300 feet up at four Cedar Fair parks