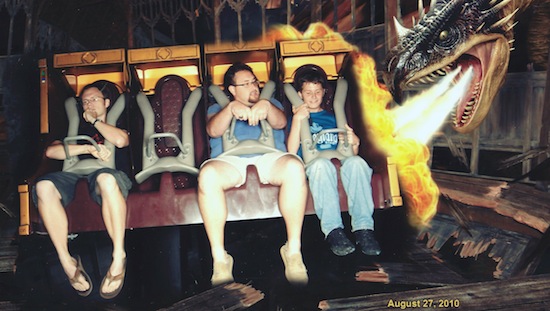 We were the first to tell you Banks Lee’s story in early June in an article entitled, “Are you too big to ride Harry Potter and the Forbidden Journey?”. This young man’s quest to lose enough weight to ride the new attraction in Universal’s Islands of Adventure made national headlines. Today he made his goal. He rode Harry Potter and the Forbidden Journey. (Pictured above, second from right.)

Many have complained that Universal made the ride too restricting. In fact, Banks was always able to ride all the rides at Universal until signature ride in The Wizarding World of Harry Potter opened. But instead of complaining, Banks made it his goal to lose enough weight to be able to ride.

Besides the national attention, Banks started a blog documenting his journey – “Banks Lee and the Three Clicks”. (The restraint needs to click down three times before you can ride.) He said the support on his blog and from most everyone has been tremendous and has helped him stay on target.

He tried to ride a few weeks ago, but the ride attendant wouldn’t help him push the restraint down. He got one click by himself, which was an accomplishment. But today the ride attendant was able to give him the extra push he needed. “Right now it seems I’m at the point weight- and size-wise where I can get the three clicks if the loader gives the restraint a good push,” Banks said.

He weighed around 310 pounds when he started his diet on June 7. Almost three three months later, he’s lost almost 25 pounds. He now weighs 290. But Banks isn’t stopping now. “I want to continue losing weight and see how long it takes before I can get two clicks by myself, then three clicks by myself,” he said “The ideal weight I would love to get to is 250.”

So after all the anticipation, what did he think of the ride? “I loved it! It was absolutely amazing! It totally lived up to my expectations. It is now number two on my all time favorite rides list, just below Tower of Terror.”

If you don’t mind my asking…What was your waist measurement at the tipping point? I am going to Disney with my hubby and I am just not sure if I should take the trip over to universal or not. It will be years before we can go back again…

Universal has modified some of the seats to allow larger guests to ride Harry Potter and the Forbidden Journey. Read the story here: https://attractionsmagazine.com/blog/2010/09/11/harry-potter-and-the-forbidden-journey-ride-seats-modified-to-fit-larger-guests/