PARKsaver: Buy 1, get 1 at Kennedy Space Center for Florida residents, plus fast food discount and toys

Kennedy Space Center Visitor Complex, one of the more overlooked experiences to the average Orlando traveler, is offering several deals. The first is an online coupon for Florida residents which will give one free admission with one paid admission. Click Here to access this coupon, or go to kennedyspacecenter.com. 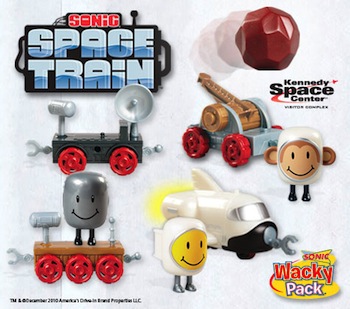 Also, for the month of December, Kennedy Space Center is teaming with Sonic Drive-In for an interesting combination. By purchasing a Sonic Wacky Pack kids’ meal, each person will receive one of eight pieces of the Sonic Space Train as well as a $5 coupon off the price of admission to the Visitor Complex. This coupon will be valid through Aug. 31, 2011.

Personally, as a long time theme park fan, I avoided the Kennedy Space Center for years. Finally, I was dragged kicking and screaming last year and ended up being blown away. I wouldn’t consider myself a big “space fan” by any means, but the history involved at the Space Center is just an incredible experience.

The Shuttle Launch Simulator has probably the best pre-ride video of any ride in any theme park. The IMAX theaters generally air 3D movies set in space and I daresay, are much more fulfilling than stuff converted into 3D at the local cinema such as Clash of the Titans. And of course the biggest draw of the Kennedy Space Center are the tours, which bring you to several humongous buildings to check out the past, present, and future of the space program.

I dragged my feet getting to the Kennedy Space Center, but when I left I couldn’t stop recommending it to everyone, including you. You won’t be disappointed.

• Derek Burgan is a long time fanatic of Orlando theme parks and attractions. He spends most of days waiting hand and foot on two demanding Yorkshire Terriers, but in his spare time he also enjoys Star Wars, comic books, Harry Potter, pro wrestling, and many other things that would make you assume he is about 15 years old. He can be seen at Facebook.

Triceratops attraction at Islands of Adventure reopens after many years

How to warm up with your own hot Butterbeer at home

Bier Fest brings the spirit of Oktoberfest to...

The buy 1 get 1 for Florida Residents is no longer being offered.

A look at the Shuttle Launch from...