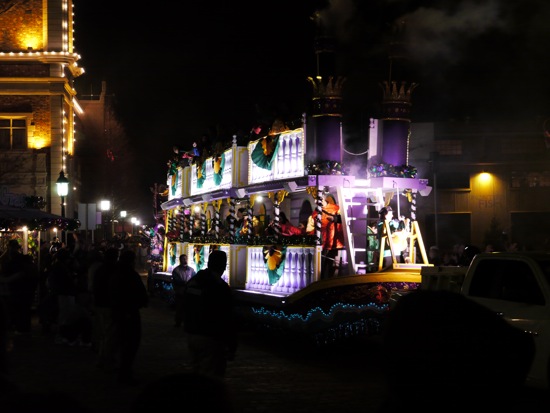 I have had the luck to be able to travel to many wonderful cities in America but one place I have not been to is New Orleans. I had no reason to go. I never really knew anybody who lived there until recently and now they always invite me to come during Mardi Gras. Of course work and life seem to always be in the way so I never get to go, but I do have a local option. Universal Studios has celebrated Mardi Gras for the past 15 years with their own special events each weekend that last about 10 weeks.

Universal Studios also offers a French Quarter Courtyard area that will make you feel as if you are on Bourbon Street. They have live musicians playing some great jazz. They have special booths set up with some local foods and of course, special drinks that are only made during this celebration.

One of the other highlights is their Mardi Gras parade. Different themed floats go by as well as stilt walkers, dancers and street performers. Everybody gets the traditional beads thrown from the floats. It’s fun and one of their best parades. Just be aware of the people throwing beads. I have been hit in the head more than once.

The best way to see and experience it all is with Universal’s special passes or Florida resident tickets.

There is the Annual Power Pass for $114.99 plus tax (regularly $139.99). This includes a year of admission to both Universal theme parks but has block out dates. It also includes admission to all nights of Mardi Gras, Summer Concert Series, Grinchmas and Macys events.

The Preferred Annual Pass is $194.99 plus tax (regularly $219.99) and like the Annual Pass, gives you access to both Universal parks, but has no block out dates. It also includes admission to all nights of Mardi Gras, the Summer Concert Series, Grinchmas and Macys events. You get free self-parking and discounts on food and merchandise.

The Premier Annual Pass sells for $264.99 plus tax (regularly $289.99) and gives you the same benefits as the Preferred Annual Pass as well as free Universal Express ride access after 4 p.m., free valet parking, one free ticket to Halloween Horror nights, more discounts on food and merchandise, and club access to CityWalk for the passholder and one guest.

Each of these passes is giving you about $25 off the normal prices. This can add up if you have to buy two or more passes. They also have some Florida resident offers for people like me who are lucky enough to live in Florida (or Georgia).

There is the Florida Resident Mardi Gras Ticket for $49.99 plus tax. It gives you admission to Universal Studios after 5 p.m. on any Mardi Gras event night. It also gives you free admission to select clubs at CityWalk for the after-party.

They are also offering the Florida Resident 1-Day/1-Park Ticket for $54.99 plus tax. This gives you all day admission to Universal Studios on any day and admission to Mardi Gras when used on an event night. A regular 1-Day/1-Park ticket costs $79 plus tax, so again, a $25 savings by being a Florida resident.

I went to Mardi Gras at Universal many years ago and it is just as much fun now as it was then. The only Universal special event I like more than this one is Halloween Horror Nights. Pace yourself, don’t drink too much and see how many strands of beads you can collect. Now I just have to find the right party clothes for my next visit. Maybe something in purple and green?

• Christopher Ollendorf is just your average Orlando guy who loves the theme parks. He has worked in the retail field for most of his life but spent 15 years of that time working for Walt Disney World. At Disney, he worked in entertainment, guest services, retail management, front desk and training. He’s had extensive experience selling theme park tickets.

Should Jurassic Park in Islands of Adventure...