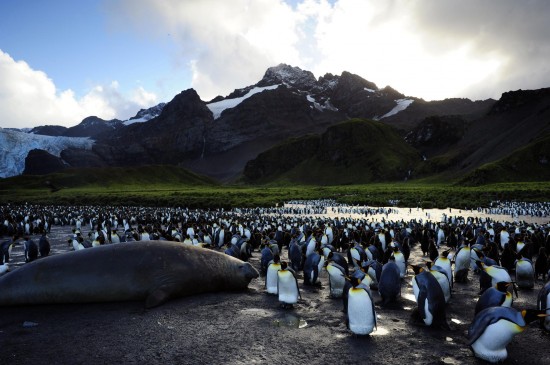 A new 3D documentary has premiered in the Digital Adventure Theater at the Orlando Science Center: Penguins 3D.

Narrated by veteran filmmaker and renowned naturalist Sir David Attenborough, the film celebrates the destiny of a very special king penguin, who returns to his birthplace in the sub-Antarctic. Known as Penguin City, the island is home to hundreds of albatrosses, fur seals and brawling elephant seals — as well as six million penguins.

Somehow the hero must earn his place among the island inhabitants and fulfill his destiny by finding a mate and raising a family. What follows is the story of the most challenging time in a king penguin’s life, when he is driven to nurture and defend his offspring against harsh weather and fierce predators.

“Penguins 3D” will be showing at Orlando Science Center through fall 2013. The film runs 40 minutes and is intended for General Audiences. “Penguins 3D” is included with admission to the Orlando Science Center, which is $19 for adults and $13 for youth. Tickets also include access to all four floors of exhibits, unlimited educational films, one Hollywood feature film and live presentations.