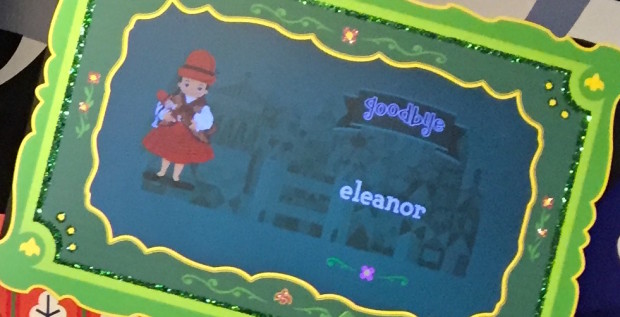 It’s a world of hopes and a world of flat-screens after all, as Walt Disney World’s iconic It’s a Small World attraction has just added personalized goodbye messages to its finale.

The “Happiest Cruise that Ever Sailed” has been greeting guests with its animatronic dolls and infectious theme song since the Magic Kingdom opened in 1971. But as of March 9, 2016, guests can now experience a new ending to the familiar classic, because digital displays that were added in an earlier refurbishment have finally been activated. As boats pass the colorful farewell signs in the ride’s final section, the screens can now deliver a personal adieu, bidding ‘Bon voyage’ to each guest by name.

The secret behind this bit of pixie dust is a new facet of MyMagic+ dubbed StoryMaker. MagicBands on riders’ wrists are read by sensors inside the ride, which then link to the My Disney Experience network to retrieve their names and display them onscreen. This enhancement was promoted by Disney when they first introduced MyMagic+ way back in 2013, but has only now been activated for guests to experience.

Of course, this isn’t the first Orlando to say sayonara to guests by name; E.T. has been pulling a similar trick at Universal Studios Florida since 1990. But this first step from Disney, and its seamless integration with the MagicBand infrastructure, speaks to exciting innovations that could be on the horizon. Before long, could Mickey Mouse greet you by name without being prompted? Or might Toy Story Mania someday remember your past rounds, and adjust its gameplay accordingly? If the new personalized finale for It’s a Small World is the tip of the iceberg, there could be a wave of customized experiences coming Walt Disney World’s way in the future.

Here’s a look at the new ending screens in action:

Should I buy a MagicBand+?

Three ways to celebrate ‘Encanto’ at Disneyland this...

You still have to ride it to experience that though 😛

Pleasure Island not the only Disney entertainment...