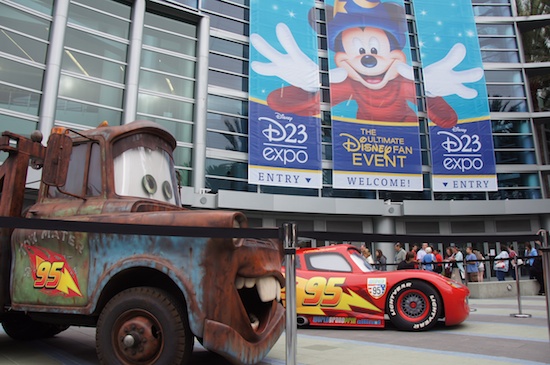 Disney’s D23 Expo was held Aug. 19 to 21, 2011 at the Anaheim Convention Center in California. There was so much happening that we couldn’t possibly cover it all. So our focus was on Walt Disney World news and everything we thought our readers and viewers would really enjoy. Below are all our coolest videos from the event, followed by a full photo gallery.

Let’s start with a video produced by Disney that tells a bit about the event and shows you around the expo floor.

Mickey Mouse was on hand to meet guests. But it wasn’t the Mickey you may be used to. This Mickey wasn’t “saving his voice for one of his shows”. He was actually talking to guests.

Mickey Mouse dancing and talking with guests at D23 Expo 2011

Mickey not only surprised guests by talking to them, he is also very good at playing the drums.

This video was playing in the Parks and Resorts pavilion. It shows the design and testing of the upcoming Seven Dwarfs Mine Train ride.

During the Disney Legends Ceremony, some voices of the princesses sang. Here’s Paige O’Hara, voice of Belle from Beauty and the Beast.

Lea Salonga, the singing voice of Jasmine in Aladdin and Princess Mulan.

Anika Noni Rose, voice of Tiana in The Princess and the Frog.

Jodi Benson, voice of Ariel in The Little Mermaid

Then all the “princesses” came out and sang together:

Jim Henson also received a Disney Legend award. Here are Kermit the Frog, Miss Piggy and Rowlf the Dog talking about him.

Kermit and Rowlf also sang Rainbow Connection on stage during the Legends Ceremony.

We weren’t allowed to take video during the Walt Disney Studios presentation, but Disney provided this overview.

We were among a small group of media who were able to interview Bill Farmer. He’s the official voice of Goofy.

Meet the men and women behind the announcements and character voices you hear in Disney’s theme parks. Here’s their full presentation.

Marvel gave a presentation showcasing their history for the Disney fans who may not know much about them. Here’s the full presentation.

Disney Channel fans had a lot to see as well. Here’s the cast of So Random and Good Luck Charlie.

Another video showing the cast of So Random.

We also featured some exclusive interviews and content from the expo on our weekly Show. Skip to 1:40 in the Sept. 1 show for an interview with an Imagineer and a look at the large Fantasyland model that was on display. Stay tuned after that for a look around the show floor and skip to 14:00 to meet a new type of animatronic called The Great Destini.

Here’s our full photo gallery from all three days of the expo.

Journey Into Imagination with Figment gets small...

Look for your copy of Attractions Magazine...