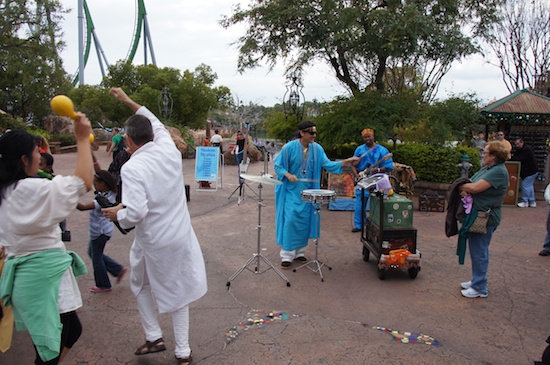 We knew it would be busy the last day of New Year’s weekend, but we braved the crowds at Universal’s Islands of Adventure. As with most theme parks, they brought out some seldom seen things to keep the large crowds entertained. Here’s what we saw that was new and different, plus a look at the now closed Dudley Do-Right’s Ripsaw Falls.

Above, a group called Modern Mystics was performing near the front of the park. Guests were dancing around with them and seemed to be having fun. 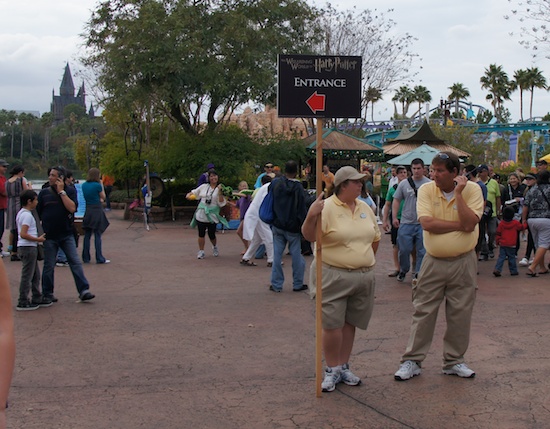 We got to the park a little later in the day, so this sign wasn’t really needed. But during busy times, access to The Wizarding World of Harry Potter is limited, so they want to keep one line instead of one at each entrance. 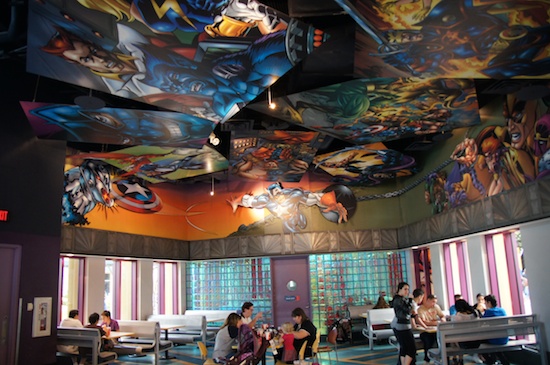 The restaurant on the corner in Marvel Super Hero Island is rarely open so we checked it out even though we weren’t hungry. 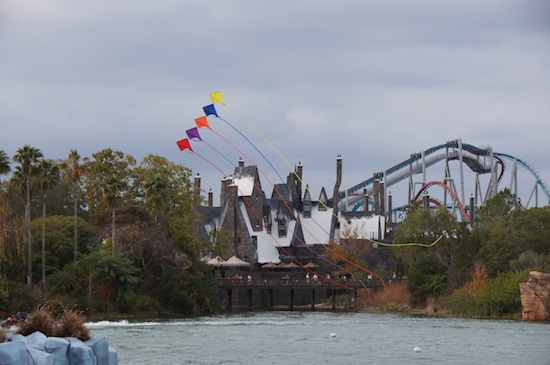 It turned out that the outside dining behind the restaurant was a great place to watch a new show being performed on the lake. Two guys were flying as many as five kites at a time while being pulled by personal watercrafts. Watch episode six of The Show to see video of them in action. 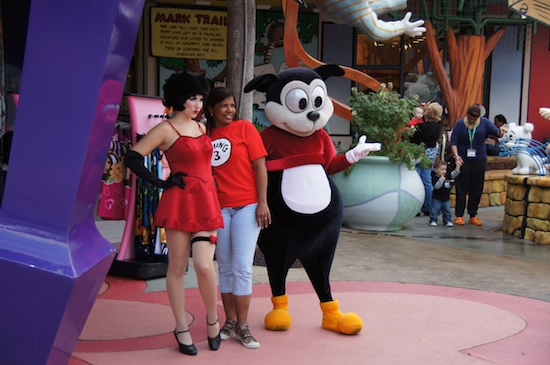 I’ve seen Betty Boop meeting guests many times in the park, but I’d never seen her friend. His name is Bimbo and he’s a dog. 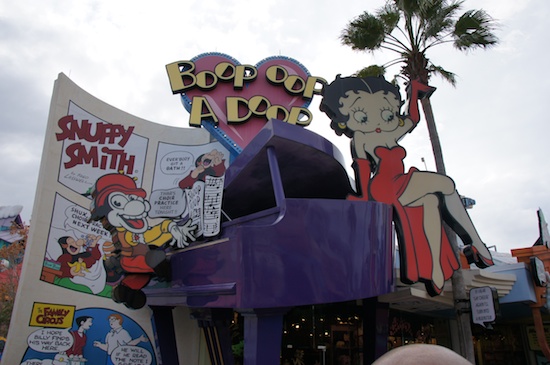 You can see Bimbo playing piano on Betty Boop’s sign in Toon Lagoon. 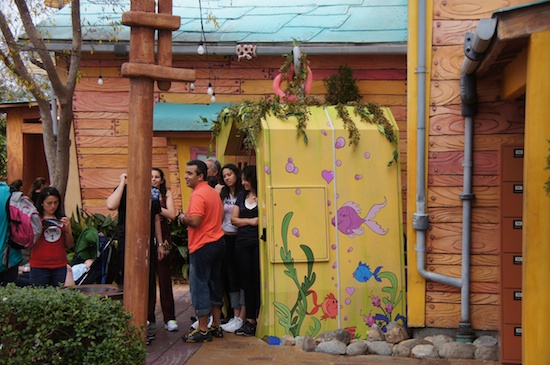 Universal has had these people dryers near some of their water rides for quite a while, but they recently added some decorations to them to make them fit in with the theme of the area they’re in. This one near Popeye’s ride, Me Ship, The Olive, had a picture of Olive Oil painted on the other side. 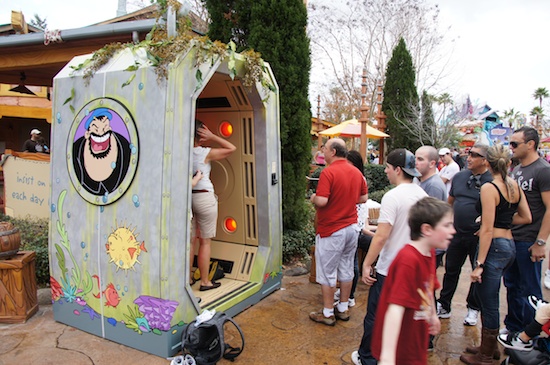 Here’s another one further down the path. They seemed to be quite popular. 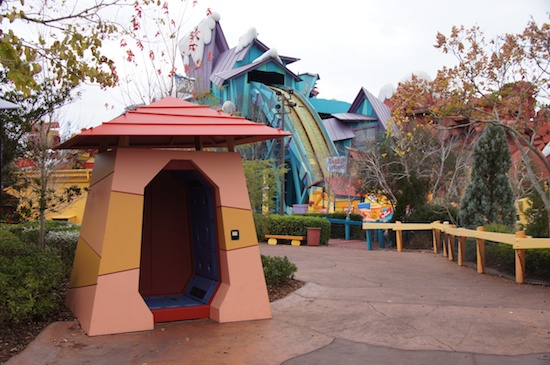 Here’s a look at how they themed the body dryers near Dudley Do-Right’s Ripsaw Falls. 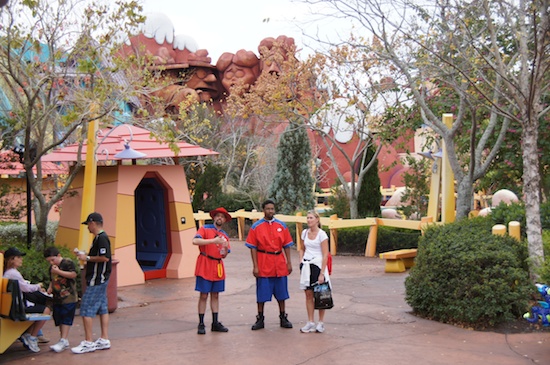 If you haven’t heard, there was a fire at the Ripsaw Falls ride on Saturday. The ride is still closed and team members are standing by to let everyone know it isn’t open. 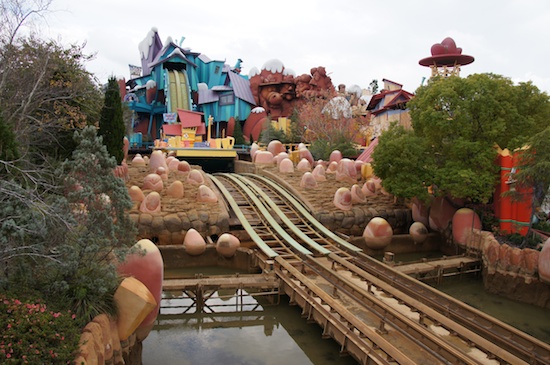 It was interesting to see the ride drained of its normal waterfall. A team member told me the ride was supposed to undergo its annual maintenance soon anyway, so they’re going to go ahead and do that as well as repair the fire damage. She said it would be months before it reopens. Universal has officially stated it will reopen in weeks, although they didn’t say how many weeks. 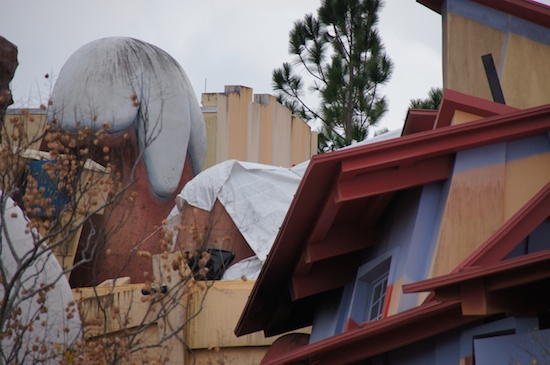 Not much visible damage could be seen from Toon Lagoon. The most I saw were these tarps. 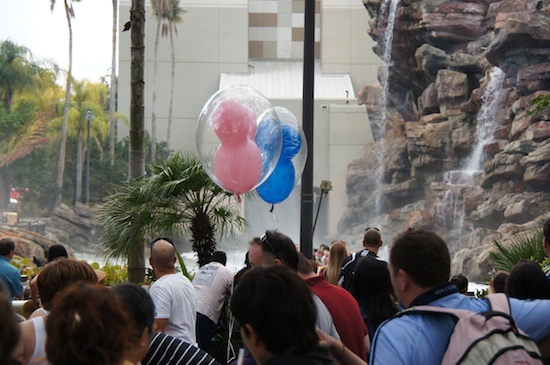 Over in Jurassic Park I spotted a family with balloons tied to their stroller. That’s not unusual, except that they were Mickey Mouse balloons. I wonder how many days they’d been tied there. 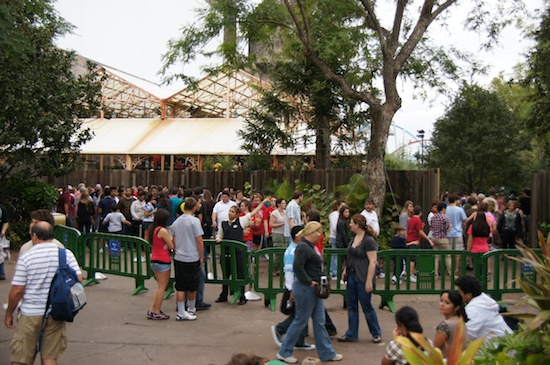 The busiest ride at the park was the newest, Harry Potter and the Forbidden Journey. Even though it has a very long queue, they still had to break out the barriers for some extra room, which you could see from Jurassic Park. 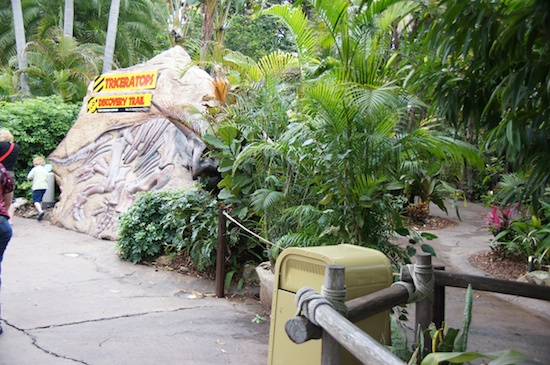 It was less than a month ago that we reported that the Triceratops Discovery Trail had reopened after being closed many years. Now it’s closed again. I can only assume it’s going to be used as a seasonal attraction and only be open during the park’s busiest times. Fear Factor at Universal Studios is used the same way. The next really busy period will probably be spring break. 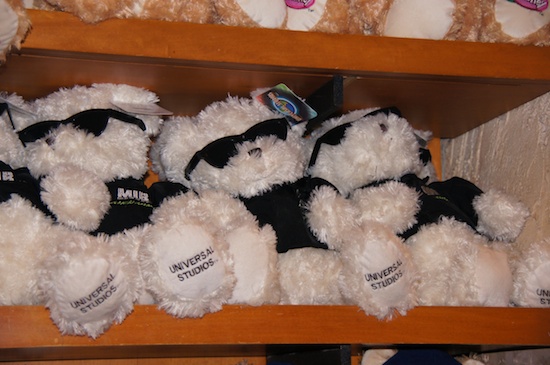 I noticed quite a few different teddy bears for sale in some of the shops. I’m sorry Duffy, the Men in Black bear is cooler. 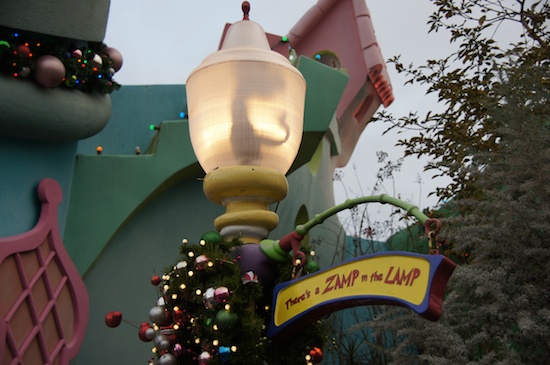 This goes in the category of things I never noticed or things I forgot about. I don’t remember seeing this lamp in Suess Landing. It actually has a Zamp in it. 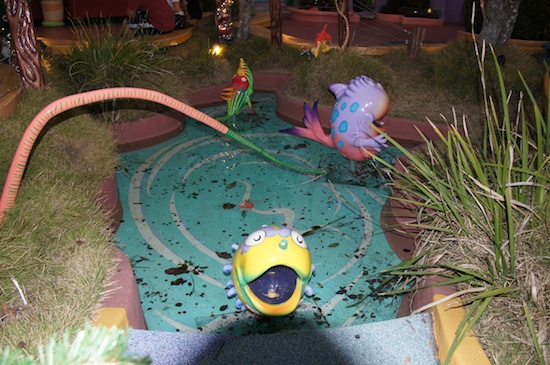 In case you never noticed, these fish in in Suess Landing will squirt you if you throw a coin in their mouth. 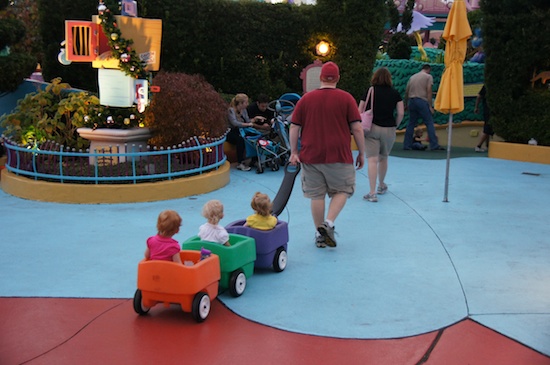 We’ll end the update with this cute picture.

May photo/video update for The Wizarding World...

More peeks at the testing of Universal’s...