I visited Disney’s Magic Kingdom this past Saturday to bring you these updates. Take notice of the yellow arrows added to Disney’s concept art above, as you’ll see the actual photos of these areas below. 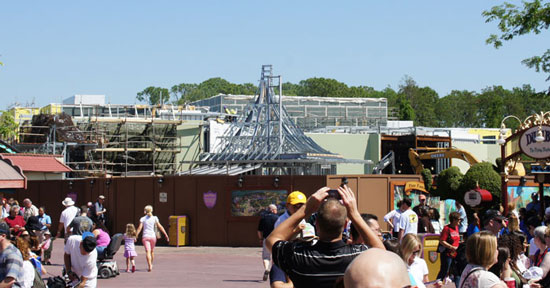 Here’s a look at the western end of the upcoming Be Our Guest restaurant. Note the rock work forms to the left. 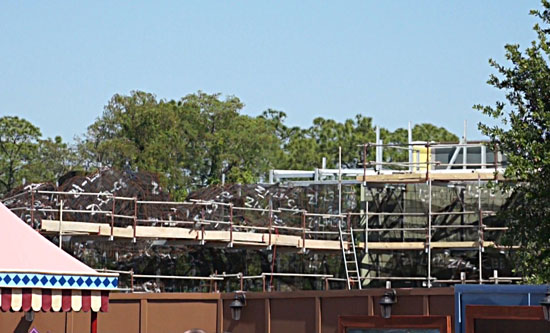 This is a close-up of the rock work forms in that area. 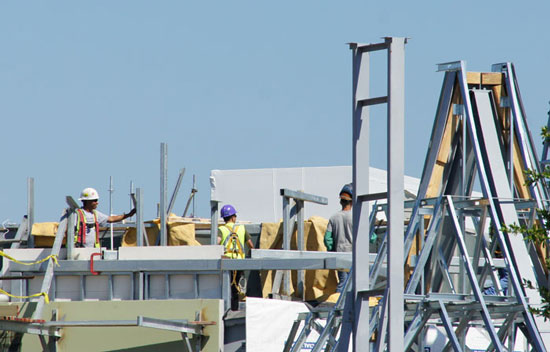 Workers continue to assemble the roof structure in that area. 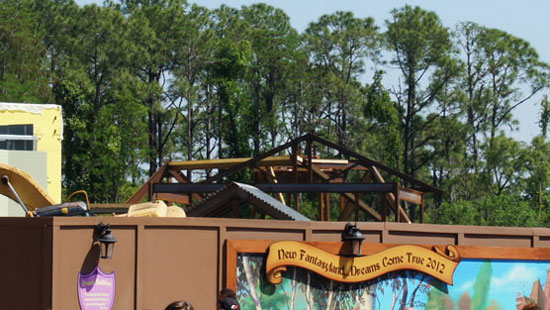 The roof line of Gaston’s Tavern, on the other side of the Be Our Guest complex. 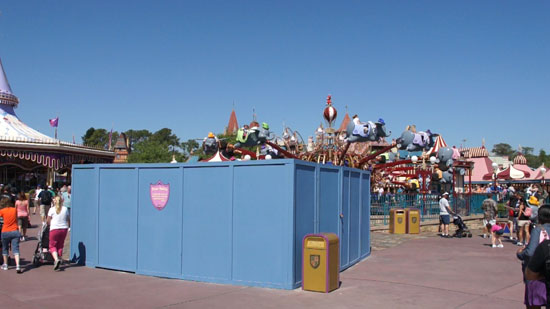 This may be the start of the castle wall framing that will run through Fantasyland. 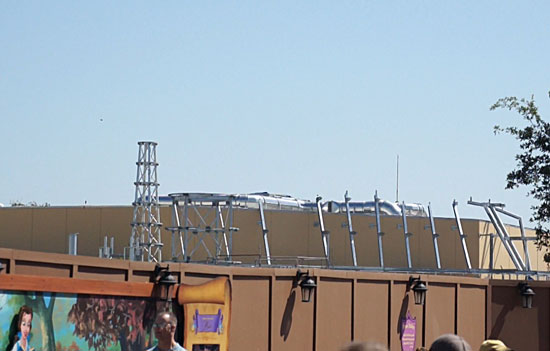 The structure of the facade for the Little Mermaid attraction is also continuing to grow. 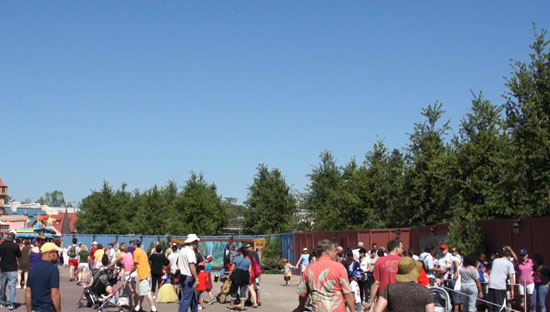 The forest is also growing. Right now, these add visual comfort to guests. Trees are always welcome backdrops, and although these don’t provide shade, the area does seem cooler. These trees will probably be planted in their final locations within a year, and become the forest of the new Fantasyland area. 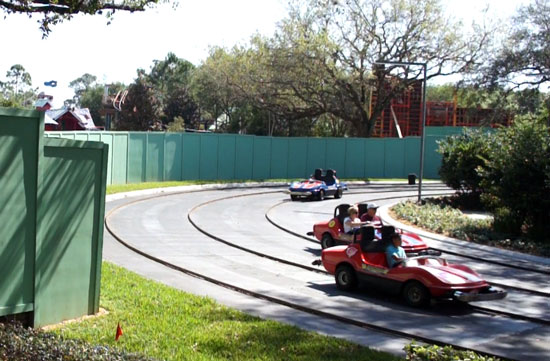 The area beyond the fence here used to be thick with trees. This is the new Storybook Circus tent area. 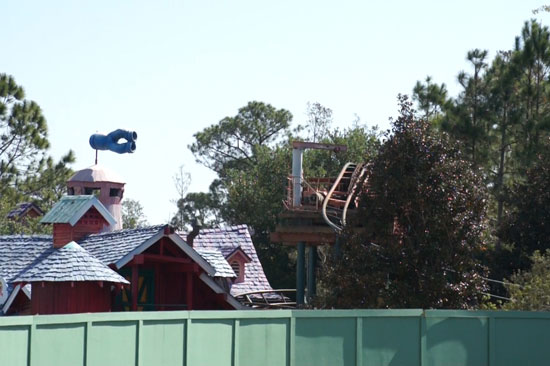 The view of what will soon be called The Great Gooftini roller coaster. It used to be Goofy’s Barnstormer. 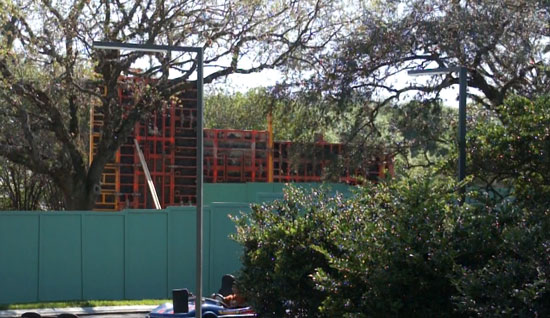 These seem to be concrete forms.

The red and blue lines indicate how the pairs of lanes were rerouted. 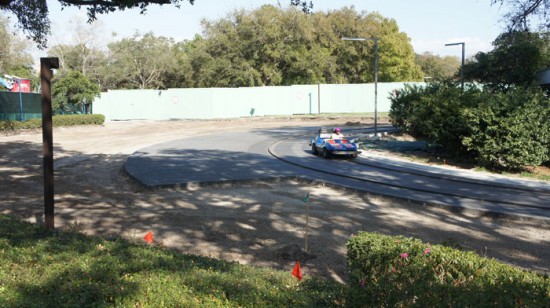 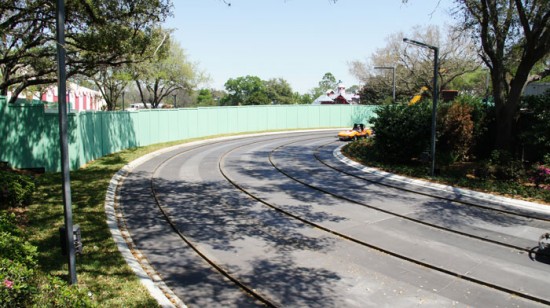 Here’s the new turn as of March 25. Most guests won’t notice a difference. The reason the turn was relocated is unclear at this time. The shift does allow 30 to 40 more feet of land available for the Fantasyland expansion – perhaps it is for more room for the Seven Dwarfs Mine Train ride. The concept artwork shows the area behind the wall here as a wide walkway. 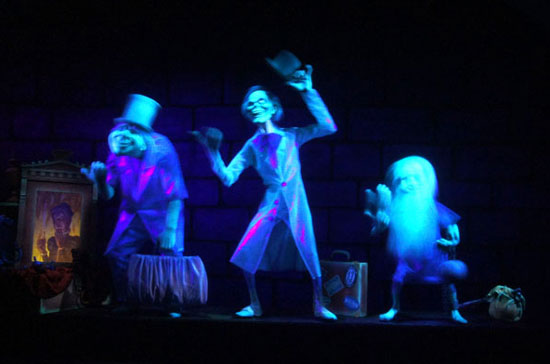 Part one of the updated hitchiking ghost gag opened recently. The ghosts are better animated and are more blue than before. Look for a separate update on the second, interactive part of the gag. 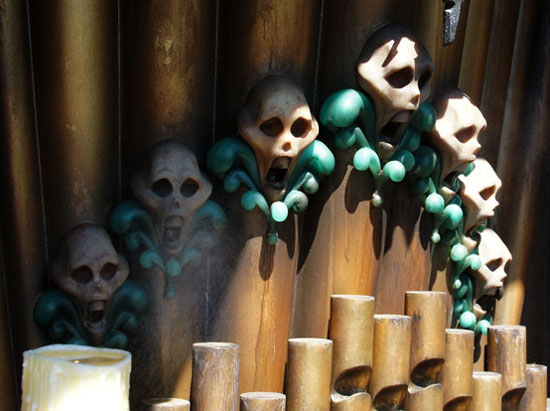 These skulls are now singing notes of ghastly vapor in the new Haunted Mansion graveyard queue. 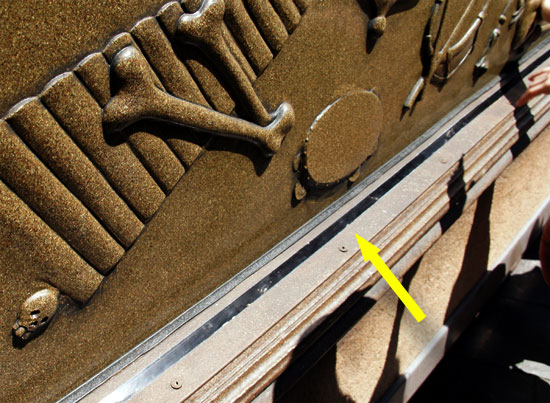 The touchability of the new musical crypt is actually achieved with beams of light. The arrow points to a trick that was originally developed for Epcot in 1982. Epcot had kiosks and other interactions with touch screens. Touch screens are common and routine today, but at the time there were no durable surfaces. So the Imagineers ingeniously ringed the Epcot touch screens with a frame that used invisible beams of infrared light. As you touched the video screen glass, your finger interupted a grid of the infrared light. The Epcot video screens were removed in the 1990s. But the trick has come back to the Haunted Mansion queue. 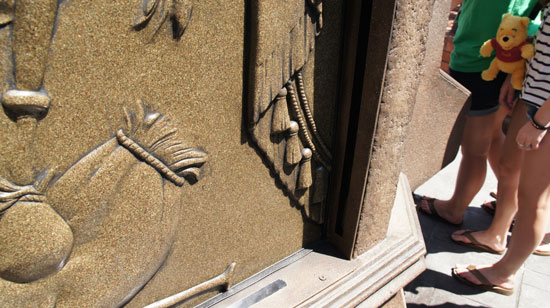 This photo shows a corner of the crypt, with two of the light beam emiter/receivers. 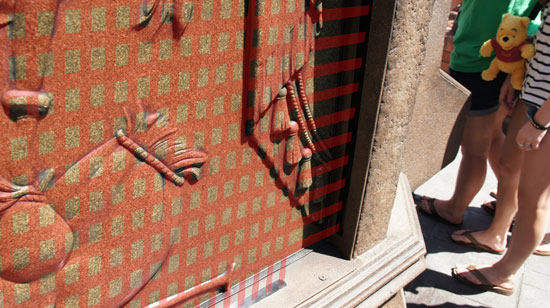 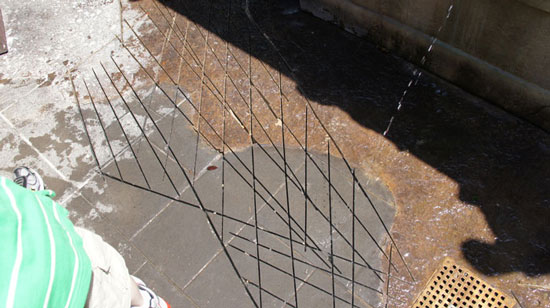 This area in the nautical crypt area was criss-crossed with cuts from a concrete saw, indicating the pavement was going to be removed for an improvement. 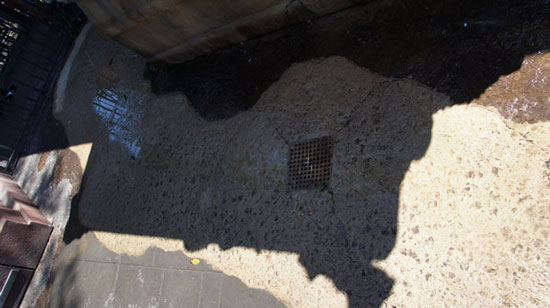 The improvement turned out to be an extension of the rough surface. Some shoe types were slippery here. Now this wet area is safer for guests. 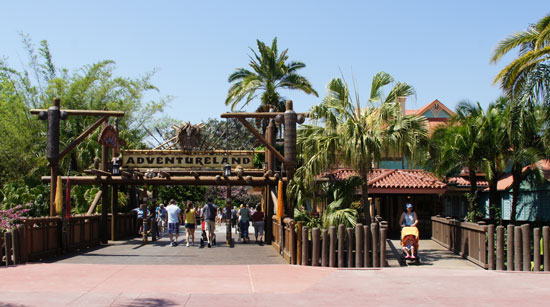 It seems like every 10 years the Adventureland bridge is replaced. Here is the new flat version, and it seems like the temporary bridge (to the right here) will remain. 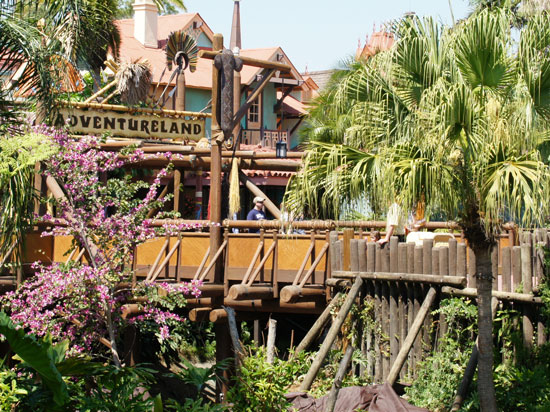 Another view of the new flat bridge. 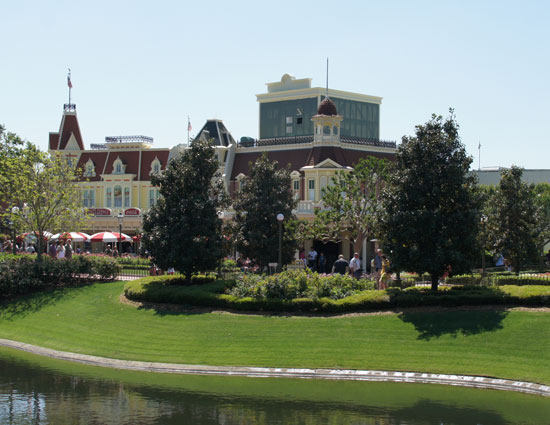 Work continues on improving the theming to hide the projectors for the new nighttime castle show, The Magic, The Memories and You. 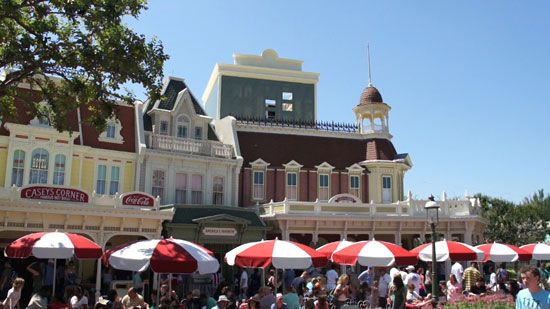 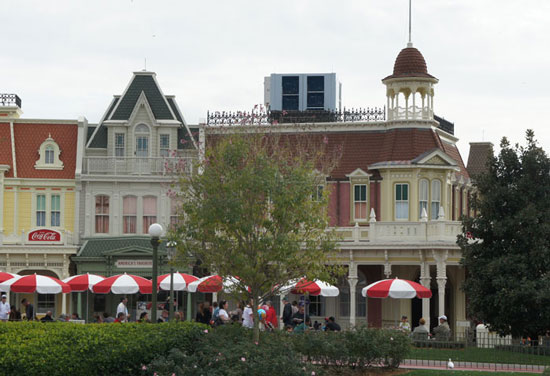 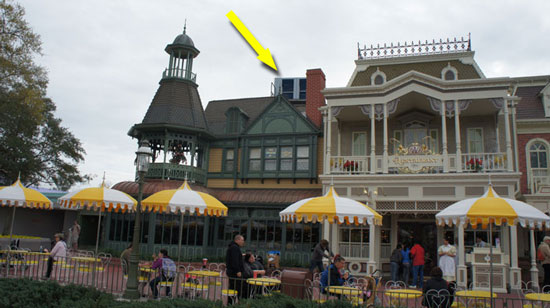 The projectors on the east side are a little more hidden by the roof line. 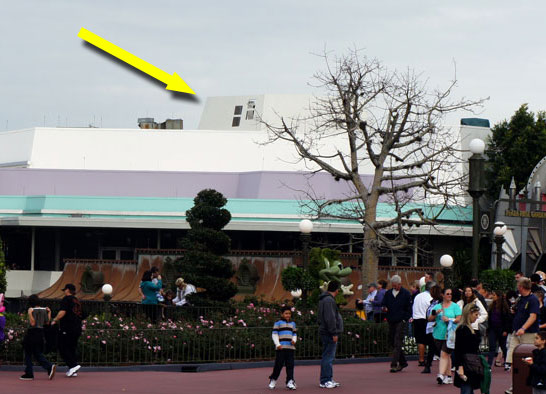 Theming that hides the projectors on the Tomorrowland side of the castle. 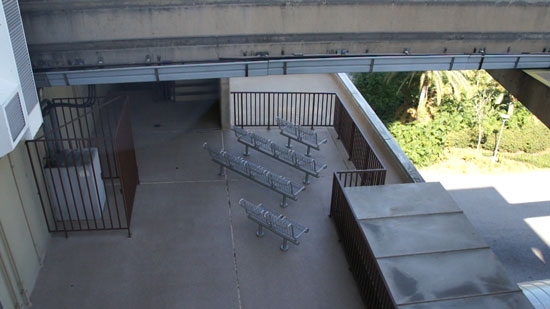 Moving over to the Contemporary Resort, a few months ago this guest seating was quietly added as an improvement to watch the Wishes fireworks show at the Magic Kingdom. 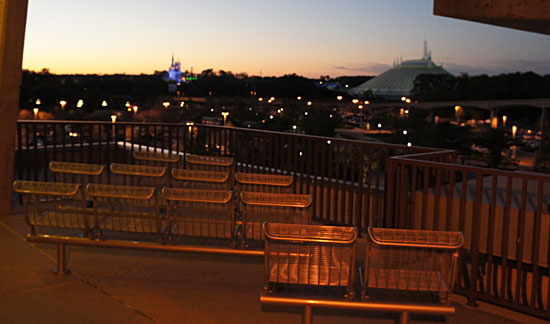 The seating is available to anyone, but probably could be reserved as a post-dinner area for a wedding rehearsal, or as an area for a business convention to celebrate top performers and treat them to a private party ending with fireworks. 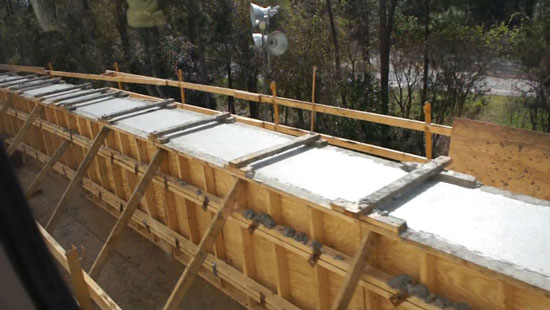 A new service beam was added to the monorail system, where the Epcot beam completes its turn out of the Transportation and Ticket Center. It’s where a service vehicle will be parked for a more central location. 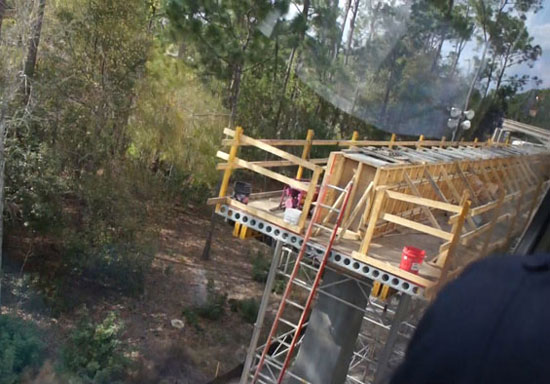 These monorail photos are from Feb. 20.

We’ll end with a video look at some of these updates:

Great job on the photos! I think they are great. Keep it coming!