Photo Finds: Fantasyland expansion and other updates from Magic Kingdom 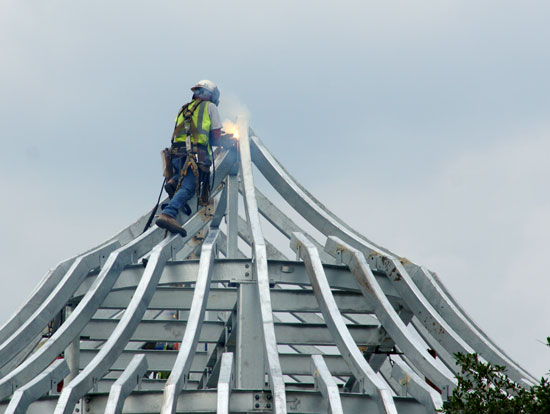 We visited Disney’s Magic Kingdom yesterday for a couple of hours to bring you some Fantasyland expansion updates and other noticeable things around the park. Let’s start in Tomorrowland and make our way around the park counterclockwise. 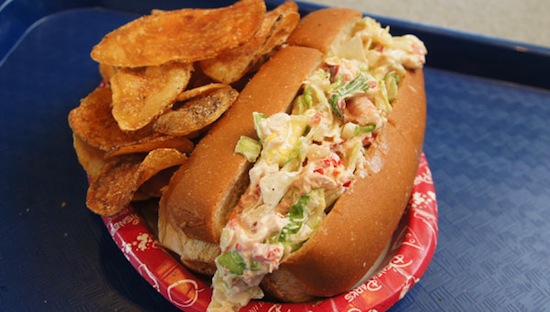 Don Gworek sent this photo in from the Tomorrowland Terrace Restaurant. Looks like they have some new things on the menu, including this lobster roll with homemade chips. 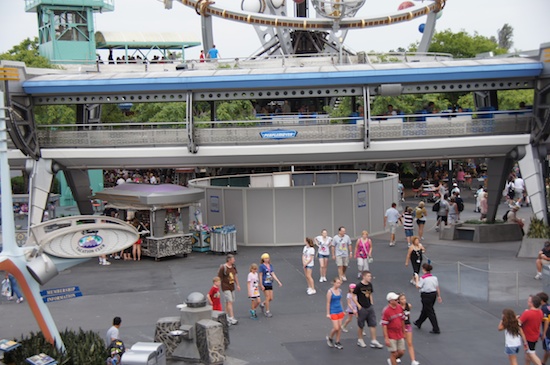 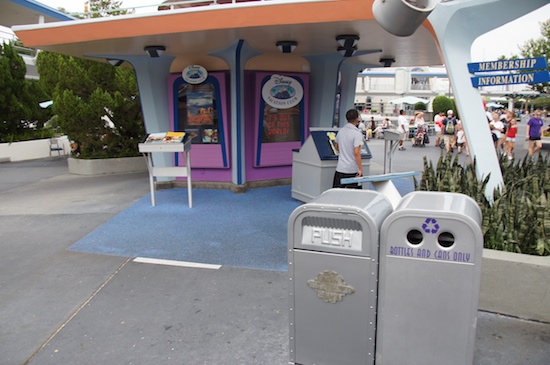 One person in our group went to trade a Vinylmation so we told him to meet us by the statue of Pleakley from the Lilo & Stitch movie and cartoons, but there was a problem. The statue is no longer there. Luckily he knew where it used to be. 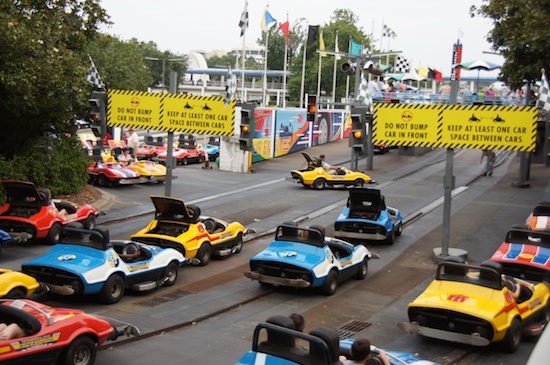 I noticed cast members lifting the hoods on quite a few cars on the Tomorrowland Speedway. I thought maybe they all happened to break down, but they were disabling the engines while they brought more cars onto the track. 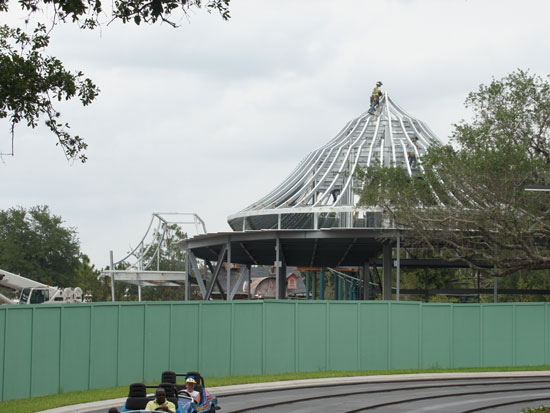 Here’s a look at the frame for a circus tent that will be a part of the Storybook Circus area featuring the dual Dumbo rides. (Photo by Don Gworek) 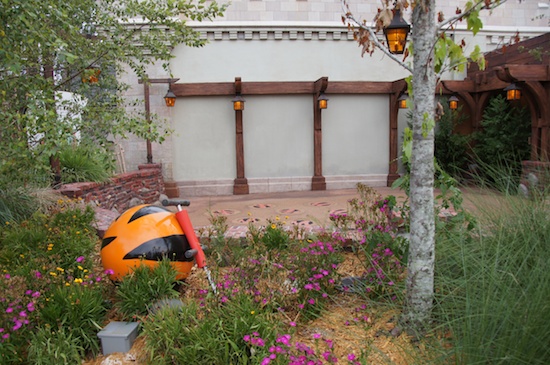 The Tigger bounce area of the new Winnie The Pooh queue is still roped off. I’m not sure if it’s a safety hazard or if something isn’t working right. I’ve only seen it open once since the interactive queue was added. 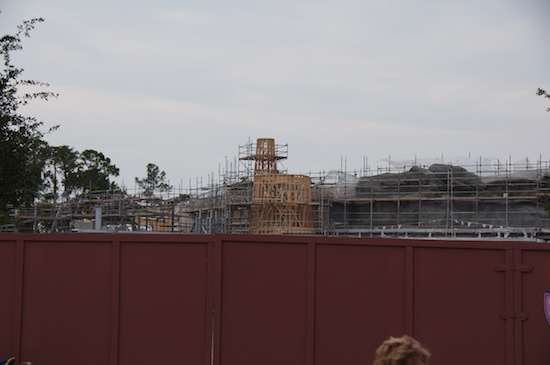 Here’s a look at the front of the new Little Mermaid ride building. When it opens next year, it’s going to have a much more elaborite theme than the recently opened ride at Disney California Adventure. Click Here for a look at the ride at the Disneyland Resort. The inside is said to be the same on both coasts. 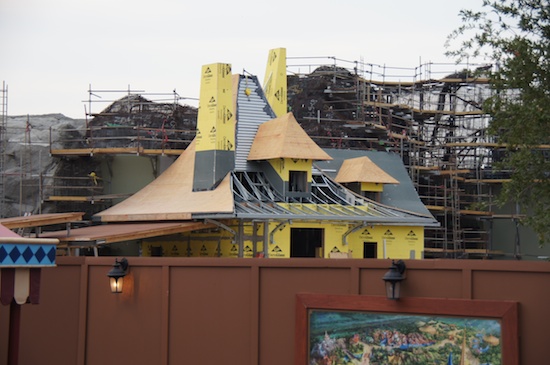 You can see that Maurice’s workshop is taking shape. The Disney Parks Blog describes it as “modeled after a French cottage, will be surrounded by a wishing well, footbridges and lush landscaping. Once inside, guests will step through a magic mirror and find themselves inside Beast’s expansive library, which he created as a gift for Belle in the film. This room will serve as the setting for a memorable character interaction experience with Belle – which will require a little help from Lumiere, the enchanted candlestick.” 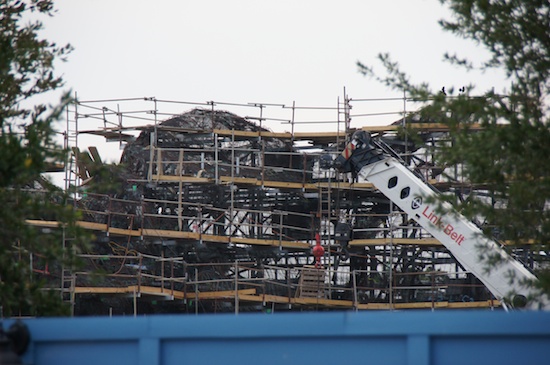 Here’s a look at some of the rock-work that will be a part of the mountain surrounding Beast’s Castle. 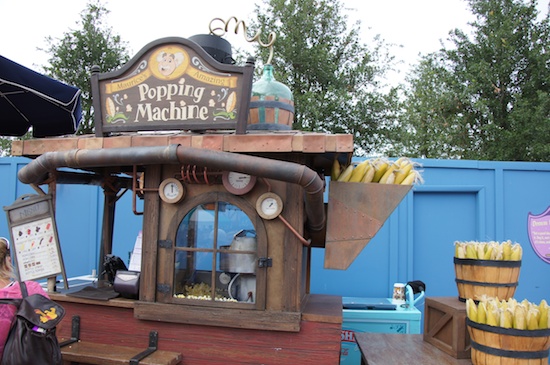 We’ve posted photos of this food cart before and told how it’s one of the first “new Fantasyland” things to appear in a guest area, but now they’ve added a sign that confirms it. The sign reads “Maurice’s Amazing Popping Machine”. 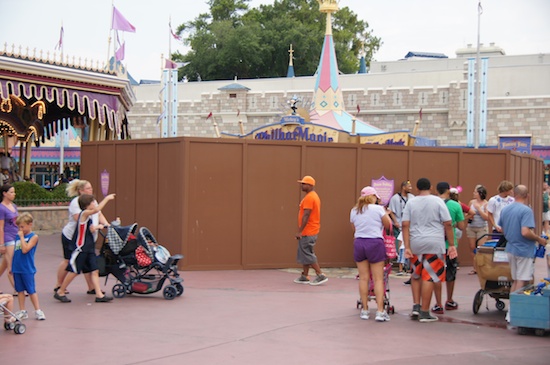 I believe this construction wall is there to hide the construction of one of the new castle walls. The freestanding wall will match Cinderella Castle’s decor. 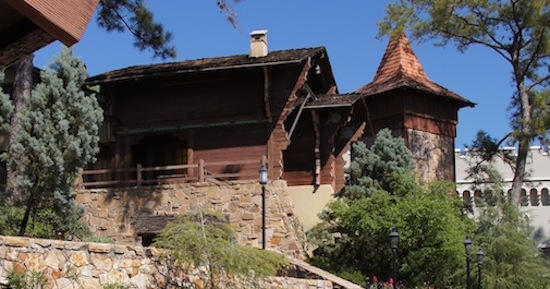 Remember the old Skyway building by It’s a Small World that has sat unused for years? Well this is an old photo of it…. 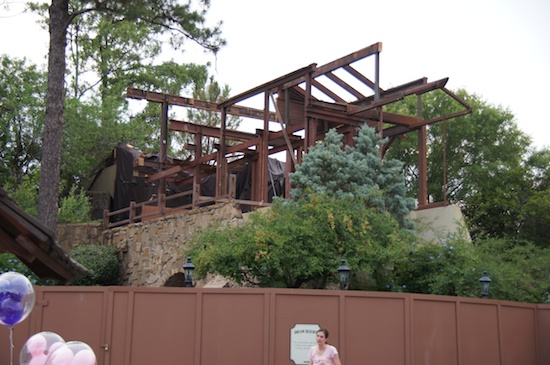 Here’s how it looked yesterday. They’re tearing it down to make way for restrooms. It’s expected the restrooms near the Peter Pan ride will close down. Could an interactive queue also be coming to Peter Pan? 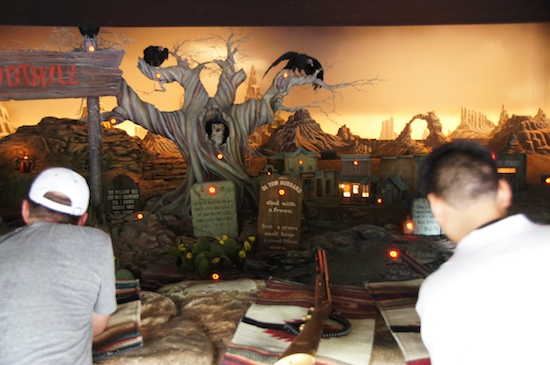 We stopped by an often overlooked area, the shooting gallery in Frontierland. I think it’s one of the only extra cost attractions in the park. It’s $1 for 35 shots. I heard it may close down soon for a refurbishment. 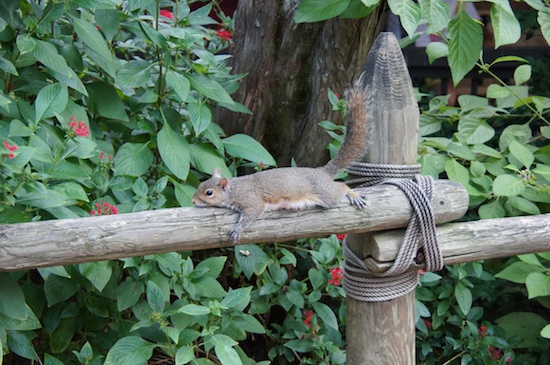 Even the squirrels get tired in the Magic Kingdom. I’ve never seen a one lying around like this. At least I think that’s what he was doing. 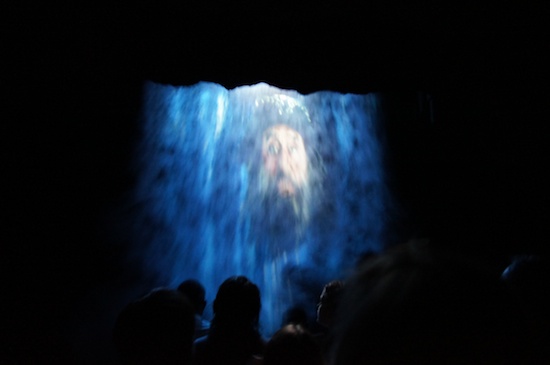 Blackbeard from the new Pirates of the Caribbean movie has been added to the ride of the same name. But his projection isn’t very clear in our park. I was at Disneyland in California a few days ago and the their projection seemed sharper. Below is a photo I snapped at Disneyland for comparison. 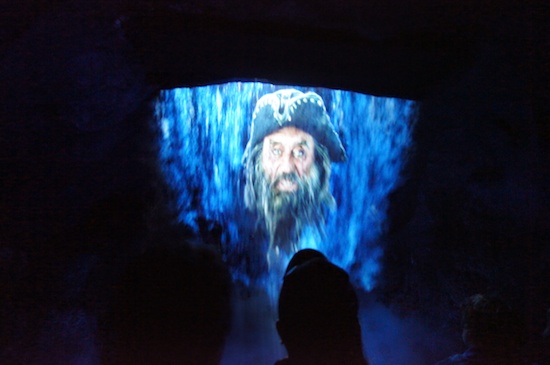 You can also hear Blackbeard’s voice as you exit the ride. Disney says Davey Jones will be back on the projections later this year. 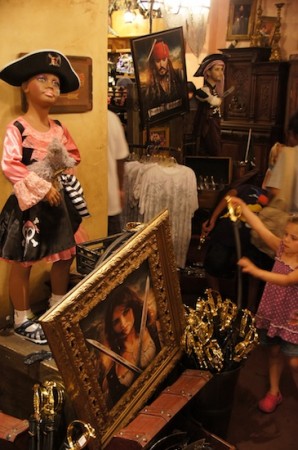 After riding, as you enter the gift shop, there are portraits of both Angelica and Capt. Jack from On Stranger Tides. 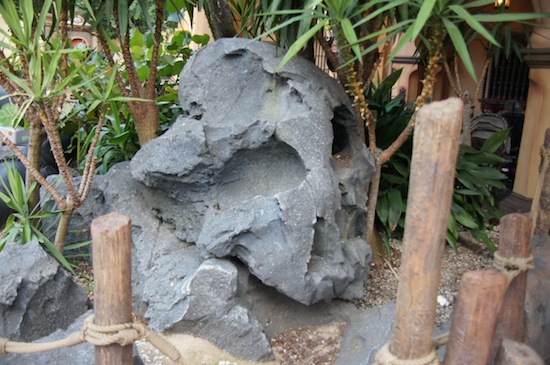 Did you ever notice that this rock outside the attraction sort of looks like a skull? I’m sure that’s no coincidence. 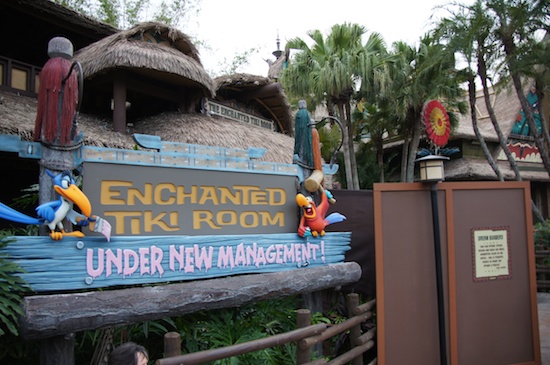 The old sign for The Enchanted Tiki Room is still up, but construction walls have also been erected. Look for the classic attraction to reopen in August. 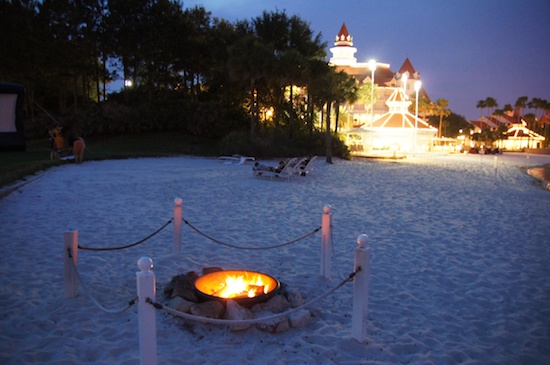 After we left the park, we went to the Grand Floridian Resort for a look around. Did you know they offer their guests a free movie on the beach every night and free marshmallows to roast by the fire?

I was at Disneyland and got to ride the new Ariel ride. While the ride was just lovely, I was dissappointed the inside where the line is wasn’t very elaborate in the decorating. I hope Worlds is more spectacular in that way.

This is what I love to see. Thankks for kkeping us updated with the fantasyland expansions

Nice update! I have a good feeling that The Beasts Castle, Storybook Circus, and Little Mermaid will open early next year. The Tomorrowland Speedway cars always had their hoods needing to be open, even when I went in September. I think its time to be replaced. I think they could expand it and make Radiator Springs Racers, and maybe the other Carsland attractions, since theres a decent amount of space around the area. However, I would take out Caroseul of Progress and make new rides in there. It should be moveed to Epcot. And since Pleakly got removed, could this mean Stich is leaving? I WOULD LOVE FOR THAT TO HAPPEN! But they need to replace it with something family friendly. Maybe a Phineas and Ferb Simulator would be good, but have actual vehicles, kinda like The Simpsons Ride setup.

Thank u so much for the photos!!! this is what we disney fans are looking forward to see!! real image updates!!! please continue posting info like this… congratulations and thank u 🙂

I am planning to visit Disney World late Sept. early Oct. 2012. Is there any chance a majority of the new attractions will be up and running? Especially Little Mermaid and Beast’s Castle? How about the Pixie Hollow?

Connie: There’s always a chance. I think at least one of the major attractions may be open by then. Pixie Hollow has been canceled. That area is becoming Storybook Circus.