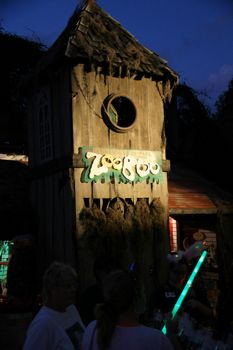 We were invited to attend Tampa’s Lowry Park ZooBoo earlier in October but weren’t able to make it to the event until this past weekend. Since Halloween and the event is over, I won’t give you a full scare-by-scare review.

The ZooBoo is a fun, family-friendly event. Although there were a few animals on display, the event is more of a Halloween event than a zoo experience. The main attractions are the six haunted houses. They’re rated by scare factor from the not scary at all Little Tyke Boo House to the seven skulls Sinister Shadows, although I found some of the lesser rated houses to be scarier.

The houses aren’t up to the quality of Halloween Horror Nights or Howl-O-Scream, but they’re not poorly done by any means. You can tell a lot of work was put into the houses and sets inside. I’m not sure if it was budget or other reasons, but I heard an employee saying they decided against using any live scaractors in the houses this year. So the startle scares were at a minimum. But many of the houses did feature animatronics, which would move, shake and pop out at you. I also think this makes it a little less scary for the kids, by knowing no one is going to jump at you or follow you around. 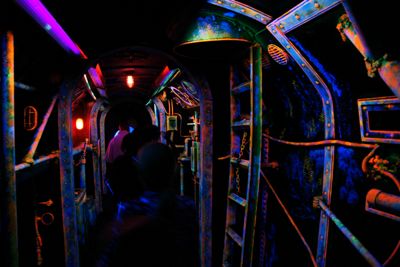 My favorite house was one of the less frightening – Fright Theater 3D. You were given glasses to wear on the way in and the house featured many neat effects.

In addition to the haunted houses, some of their rides were open and other Halloween activities such as an animal show, a little kids foam party area and a carriage ride were available.

Below are some photos and a short video of the event. In the video we’ll enter the park and check out Mr. Pumpkin and a live owl, then look at Frankinstein’s Foam Party. Next you’ll see one of the icky animals in Creepy Crawler Lane. Then we’ll peak into Little Tike Boo House, and end with a few scenes in the more scary haunted houses, Shipwrecked! Terror of Doom Island and Declassified: Project Alien.

Out of the Loop: Attractions attempt Michael Jackson tributes