Possibility of Legoland theme park to be built in Central Florida 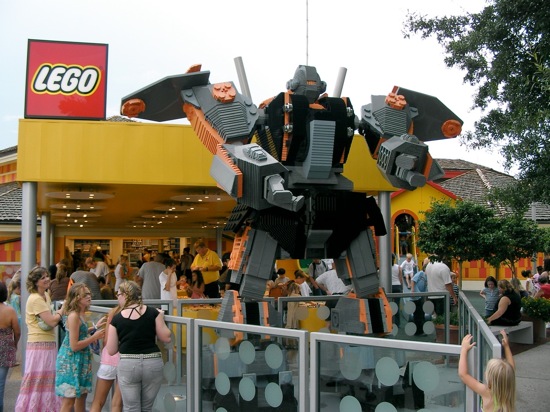 While the LEGO Store at Downtown Disney (pictured above) offers guests a glimpse at the world of LEGO, an entirely new theme park devoted to the colorful building blocks may be in store for Central Florida.

Here’s the report from screamscape.com:

One of our readers was invited to take quite an interesting online survey the other day that involves the possibility of a brand new theme park coming to the central Florida area. The questions were all about building Legoland Florida, which would be based on the basic design and layout of the Legoland California park, and feature about 50 different rides and attractions.

The survey asked some basic questions about ticket price levels as well trying to tell how interested people would be in visiting Legoland Florida on their next trip to the area as well as what age groups were thought to be just right or too old for a Legoland park trip. They also asked questions about where people would rank a trip to Legoland in comparison to all the other central Florida area attractions.

However the most interesting thing of all were questions that asked if Legoland chose to build their park on the site of Cypress Gardnes [sic], would you be more or less interested in visiting. They even drew up a map to show off where Cypress Gardens is located, kind of between Tampa and Orlando, but unfortunately it has utterly dismal freeway access, requiring about a 30 minute drive off into the middle of nowhere to find it.

The idea of a new theme park coming to Central Florida is always appealing, but when combined with LEGO, I don’t see how it could not be a success. The Cypress Gardens location may be a bit out of the way from the usual Disney-Universal-SeaWorld stops along I-4 (it’s around 50-60 minutes away from Walt Disney World), but given how popular the the LEGO store at Downtown Disney is, the brand could prove to be strong enough to draw visitors away from those areas for at least a day.

A single-day ticket to Legoland California, which has been open for just over 10 years, costs $63 for adults and $53 for children, both of which are less expensive than single-day tickets to any of the major theme parks in Central Florida. Attendance to Legoland California in 2008 was not high enough to be ranked in the top 20 North American theme parks, but worldwide Legoland attendance rose nearly 28 percent over 2007, bringing the total worldwide attendance to 35.1 million guests for all four of the Legoland theme parks.

Visit Screamscape for more information and screen captures from the aforementioned survey.

Thanks for sharing this article. Very nice pic. I am surely going to visit soon as it is one of the beautiful place on earth. It is a one time experience. Legoland theme park in UK is a complete family entertainment package. Dragon coaster is a dangerous ride, very scary for children as well as adults. Don’t miss the live running shows, building workshops, lego models in all shapes and sizes, driving schools, fire academy. For more detail refer https://www.journeyidea.com/legoland-theme-park-uk/

does anybody know about when this park would be opened?

This is still a compelling story for Central Florida. The locations mentioned would be tremendous for the area vacation rental market as they are purportedly in the heart of many resort community areas.

If, you locating to Central Florida, that would be great! Central Florida is the main attraction for tourist and many around the World visit here. So, I must said” Welcome to Florida the SunShine State. Pls. let me know when and where your going to be hiring. Thanks and Welcome.

DC Super Hero Run will be an...

The Weekly Rewind @Attractions for Sept. 8,...