Cory Doctorow is the author of several books, one of which takes place in the Walt Disney World of the future. It’s called “Down and Out in the Magic Kingdom“. It not only displays Doctorow’s keen insights on the future of entertainment, but also his true love of Disney theme parks, in particular The Haunted Mansion. He has also been named one of Forbes Top 25 Web Celebrities – twice. You can find more about him at craphound.com

We interviewed Doctorow for the Fall 2009 issue of Orlando Attractions Magazine. Below are some questions that didn’t make it into the magazine because of space constraints. 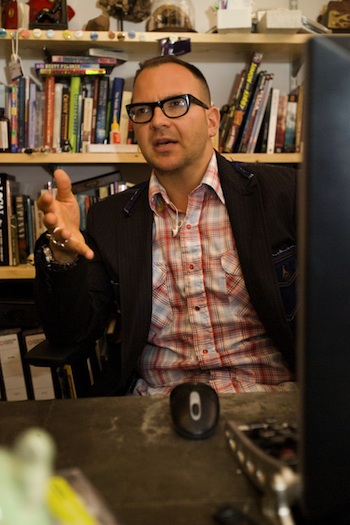 A lot of people bring up their first time in the Haunted Mansion. Do you think it’s a childhood thing?
“There’ve been three legendary rides through the Mansion for me. The last one was the first time my wife and I rode it when we were dating. We’d met at an event in Finland. She lived in England where I live now, and I was moving to England some months later. There was an eight-month hiatus during which we were in a long-distance relationship.

I had already been planning to move to England and so it was the kind of thing where it could turn into a serious relationship because we felt like this could really work. So not long thereafter, she flew to Los Angeles for the weekend and I got to take her on the Haunted Mansion and she had never been. She was perfectly delighted with it, in a way that affirmed that I had found the right person.

What do you think about some of the recent changes to the Haunted Mansion?
I really like the new parts of the Mansion. It’s the opposite of the way I felt about the [Haunted Mansion] movie. The Pirates of the Caribbean, to me, I thought the movie was great and I thought the update was kind of miserable. But for the Mansion, the ride update is amazing and the movie was terrible.

I felt similarly.
They had some great people, Wallace Shawn is amazing.

I wanted the ghosts to stay in the mansion. I wanted to know that the mansion would always be there and that everyone liked it there.
Right. I agree. I saw it in the best possible circumstances too. Opening night in New York City.

How was the fan reaction that night?
It was not very good. I dragged a bunch of friends along and they were like, “Wow that really sucked.”

Have you ever thought of pitching a script for a Jungle Cruise movie or Tiki Room movie?
I actually did write an upcoming script for one of the Haunted Mansion comics. I wrote the original story of the ghostly choir of voices that come out of the organist’s organ and the ghostly chuckle at the end of the L.A. ride. [Doctorow proceeds to tell me the plot, which I enjoy so much that I refuse to ruin it for you.]

I’ve been told by people who know the back-story to the Mansion better than I do that it actually wasn’t designed in, but that it represents a weird accident. The two principle designers actually hated each others guts, but Walt believed that he could get them to work together really well because they produced really good work when they worked together, so he was always sticking them on projects together. He would mediate the disputes and synthesize these two really different viewpoints.

Because Walt died before they finished the Mansion, these two designers said “we’re gonna draw a line down the middle of the ride.” Everything up to the attic is one guy and everything after is the other. Which is why you go from really funny to really grim, and it’s also why there have been all these attempts to graft a story onto it, and there really isn’t much of a story.

Although that story is now developing, and I think it’s kind of a happy accident. What we ended up with as a result, instead of disparate chunks, is a really lovely dissonance that makes it into really good art.

It’s been said Walt Disney was always putting people on projects seemingly on a whim. The idea is that he either took the biggest risks artistically, or that he was a really savvy businessman.
I think that Walt was actually a terrible businessman. He kept going broke when he didn’t listen to Roy. Walt was fundamentally an artist in every sense of the word, even in the pejorative sense of the word. He was a little off center, prone to tantrums. He had the disease of the genius, which is to believe that you are a genius. So he would go around telling people that he knew how to build cities, and he was kind of an anti-semite because he hung out with some kind of kooky right-wingers who were also anti-semites.

So I think that maybe he was so smart that he thought that any opinion he had was right. This is the occupational hazard of people who are geniuses. It’s why people who are incredibly smart often get ripped off by con-artists. Because people who are really smart in one domain are apt to believe that they are smart in every domain. The other thing that artists do is that they spend money irrationally. Walt spent money on stuff way in excess of what he could expect to get a rate of return on, because he needed a better product.

If you look at the history of the company, you have Walt and his people designing technology way before they had milked all of the value out of the previous level of technology. Primarily because their attention span was too short to go on developing new rides and making use of last year’s technology.

They were really in it for the thrill of the invention and the thrill of the art. That’s why Disneyland itself is popular. It turned out to be economically sound after all, but I don’t give Walt credit for knowing that. I think Walt happened upon it accidentally, and that really it was that dialectic between Walt and Roy, and Roy basically saying, “It’s really nice that you want to go invent stuff, but you can’t invent stuff anymore until we’ve finished using up the stuff that you invented last year because you’re spending money that you don’t need to spend.”

This kind of wild, mad, sometimes economically ridiculous spending is like Tokyo DisneySea. It’s the most beautiful constructed environment I’ve ever been in, but it’s economically bizarre, right? There’s no reason to spend that much money. They probably could’ve spent half as much money and made three quarters as much back, which was the rational thing to do. You don’t need to paint behind the scenery where nobody else is ever going to see it unless you just do it because you’re an artist.

That level of detail is infectious. People start craving that level of detail, in the parks, in the stores and I think, as Disney fans, we’re almost unsatisfiable.
Disney has this kind of knife-edge tension. On one hand they’ve pitched to us and especially to children, to take the symbols of Disney and make them your vocabulary for understanding the world, especially when you think about those early cartoons. But their pitch on copyright is, take the symbols that you now use to understand the world, and never use them except with our permission.

That tension, that fan tension, is at the real core of some of the problems that Disney has. I’m sure you know that Disney is more or less single handedly responsible for 11 changes to copyright over 40 years. Some of which gave us the Internet crisis.

As to why the Mansion in particular has become what it is, the mansion was made in a temporary autonomous zone between the reign of the Walt people and the reign of the Roy people, because it was built after Walt died, there was a kind of malice veneration or deification of Walt in the years after he died when the company was in shock. If you’ve read Naomi Klein’s Shock Doctrine, she talks about how in periods after great crisis, radicals of one side or another are often able to get things done that they couldn’t get done otherwise.

Because in that moment when everyone is in shock, people with a radical agenda of one kind or another can really ram it through. I think you see that in the moment after Walt dies. It’s a real kind of scared, consequence-free kind of Neverland – a moment of Neverland in which they could spend and artistically take risks and take financial risks that the company probably couldn’t take anytime before or since, mostly by saying, “It’s what Walt would’ve wanted.” Eventually that becomes a kind of almost like Stalinist litany. Where it’s like, “Walt wouldn’t have wanted it that way; Walt would’ve wanted it that way.” It’s this battle between people who claim they know what Walt wanted.

• Get your copy of the Fall 2009 issue to read more of the Q&A with Doctorow.

Out Of The Loop: Halloween around the Disney parks

Who owns the Disney parks around the...