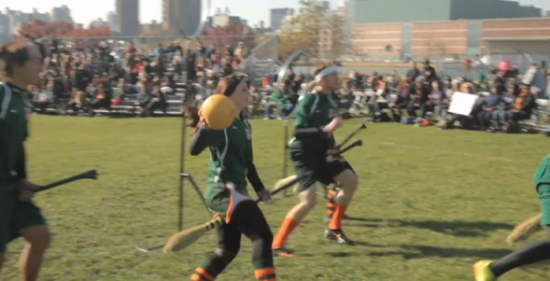 On April 13 and 14, over 80 quidditch teams from around the world will flock to Austin Tindall Park in Kissimmee, Fla. for the 2013 Quidditch World Cup. The event will feature two days of games, live entertainment, and food vendors at the action-packed sports event themed to JK Rowling’s “Harry Potter” novels.

Real-life quidditch has become an intense and popular game, adapted by college students in 2005 from the Harry Potter novels and now played at over 700 schools worldwide. Best described as a co-ed, full-contact cross between rugby and dodgeball, quidditch is one of the fastest growing sports in the world with tournaments held around the globe on a weekly basis.

The World Cup marks the culmination of the year-long quidditch season. For the first time, teams must qualify at Regional Championship tournaments in order to play in the event, resulting in the most elite and entertaining quidditch competition ever. Dozens of teams from around the world will compete, as players from Canada, France, Mexico and Australia join U.S. teams for the most internationally diverse cup yet. In total more than 1,600 athletes will strive to best each other on 10 fields of continuous play throughout the weekend.

Between and during the games, spectators can shop for magical merchandise or snack on food from local vendors as they experience a diverse array of entertainers and musicians. There will also be a special pitch reserved for “kidditch” all day long, where children can hop on a broom and try their hand at the sport.

The tournament will be capped off with a very special after-party event – more information and tickets are available by clicking here. Tickets start at $9.99 and are currently available online, as well as for purchase at the door.The event is family-friendly and open to the public.

New magical creatures will appear in the Wizarding...