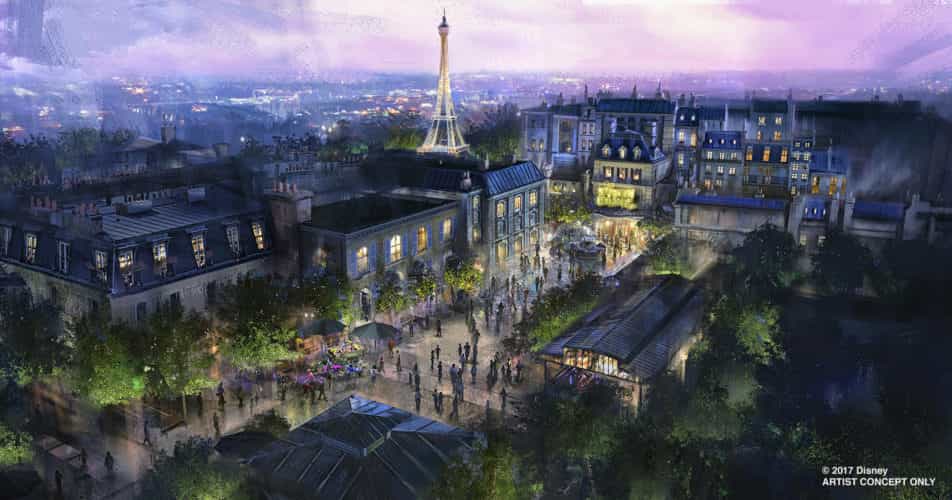 Ratatouille will be added to Epcot’s France pavilion in World Showcase.

A dark ride attraction inspired by Disney•Pixar’s Ratatouille will be added to the France Pavilion in World Showcase in time for the 50th anniversary of Walt Disney World Resort in 2021. The attraction will expand the pavilion and open a new area past the area’s Eiffel Tower, Imagineer Tom Fitzgerald said during the announcement at the D23 Expo, and no mention was made of closing the existing Impressions de France film.

Similar to the 4-D attraction Ratatouille: The Adventure that opened at the Walt Disney Studios Park in Paris in 2014, guests will be able to shrink to Remy’s size and scurry to safety in a dazzling chase across a kitchen with the sights, sounds and smells of Gusteau’s legendary Parisian restaurant. The attraction will use mouse-shaped trackless ride vehicles, and 3-D projections.

Here’s the presentation from the D23 Expo:

Get a preview of the Ratatouille ride in this video of its dedication ceremony in Paris:

Why is this attraction going to take 4 years to build?

Because they have to finish everything at HS first, plus they’re probably going to make Guardians the priority, since the Energy pavillion is closing August 13.

I hope they don’t close the film Impressions de France. It seems to be what Disney does, open a new attraction but close an old one and end up with 3-4 hour wait times.

A look at how Epcot celebrated New...