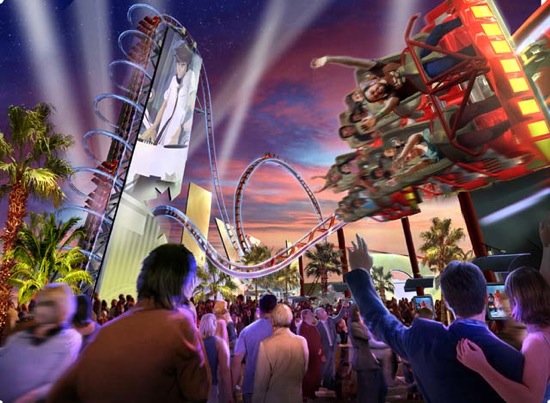 Universal Studios Orlando is currently building a new roller coaster called Hollywood Rip Ride, Rockit. While riding the coaster, you’ll be able to choose from a list of songs to listen to. You’re also video recorded while on the ride and will have the option edit and buy a copy of the song after your ride. The ride is set to open next spring.

Members of Universal’s survey panel were recently asked to look at a list of songs and rate how appropriate each one would be for the roller coaster ride. I’m told the list seemed to go on and on, as the survey let you keep rating more songs as long as you wanted to.

Some of the songs seem like very bad choices for a fast roller coaster. The interesting ones are the Indiana Jones theme, the Aerosmith songs (Rock ‘n’ Roller Coaster anyone?) and the Back to The Future theme. The survey also asked how much you’d be willing to pay for your custom video and how you’d want it delivered (DVD, e-mail, download).

Here are some of the song choices listed:
Giving In by Adema
Get Buck by Young Buck
When Worlds Collide by Powerman 5000
Calling All Girls by Rick Springfield
Tom Sawyer by Rush
Duel Of Fates by John Williams
Party Like A Rockstar by Shop Boys
Heroes (From Godzilla) by The Wallflowers
Never Gonna Come Back Down by Bt
Ok Go by Clash
Don’t Do Me Like That by Tom Petty
Interstate Love Song by Stone Temple Pilots
I Thank You by ZZ Top
Super Charge Heaven by White Zombie
Over My Head by The Fray
Kryptonite by 3 Doors Down
Solo Impala by The Fashion
Time Warp by Rocky Horror
Make Me A Believer by Sass Jordan
I’Ve Been Everywhere by Johnny Cash
It’s Goin’ Down by X-Ecutioners
Weapons Of Mass Distortion by The Crystal Method
Dragula (From The Matrix Reloaded) by Rob Zombie
La Orange by ZZ Top
Nothing But A G Thing by Dr Dre
Word Up by Cameo
Blitzkrieg by Metallica
Freaking Out by Adema
Petrified by Fort Minor
Something’s Broken by Tim Mcgraw
Main Theme From Indiana Jones by Philharmonic Symphony Orchestra
Clocks by Coldplay
Got The Life by Korn
Barracuda by Heart
Francine by ZZ Top
Touch The Sky by Kanye West
Jessie’s Girl by Rick Springfield
Papercut by Linkin Park
Too Gone Too Long by Randy Travis
Changes by Tupac Shakur
Getting Away With Murder by Papa Roach
1000 People by Blackfield
Refried Dreams by Tim Mcgraw
Click Click Boom by Saliva
Flashlight by Parliament
I Don’t Wanna Miss A Thing. by Aerosmith
La Is Burning by Bad Religion
Old Time Rock And Roll by The Hit Crew
It’s My Life by Bon Jovi
Soldier Jane by Beck
Dani California by Red Hot Chili Peppers
The Distance by Cake
Daughter by Pearl Jam
Bat Dance by Prince
Take Me Out by Franz Ferdinand
More Than A Feeling by Boston
Where It’s At by Beck
Thriller by Michael Jackson
Here Comes My Girl by Tom Petty
Gimme The Light by Sean Paul
Jellyroll by Blue Murder
Hard To Handle by The Black Crowes
Switchback by Celldweller
Vicarious by Tool
Got Me Under Pressure by ZZ Top
If I Fall Your Going Down With Me by Dixie Chicks
Possum Kingdom by Toadies
Guerilla Radio by Rage Against The Machine
Lady Marmalade by Moulin Rouge
Hash Pipe by Weezer
Uptown Girl by Billy Joel
Suicide Messiah by Black Lab El Society
Rooftops by Lost Prophets
Summer Of 69 by Bryan Adams
Gifts And Curses by Yellowcard
Evil Ways by Santana
I Did It by Dave Matthews
Crazy Train by Ozzy Ozbourne
Enter Sandman by Metallica
Let Me In by Young Buck
Overnight Celebrity by Twista
Miss You by Rolling Stones
Just Because by Jane’s Addiction
I Feel For You by Chaka Khan
Bad Boys Runnung Wild by Scorpions
Crackerman by Stone Temple Pilots
Party Up by DMX
We Still Kill The Old Way by Lost Prophets
Car Wash by Roll Royce
Back To The Future Theme by Cincinnati Pops Orchestra
Pump It by Black Eyed Peas
Bring Me To Life by Evenescence
Born Too Slow by The Crystal Method
Crazy by Gnarls Barkley
Lets Go Crazy by Prince
Vasoline by Stone Temple Pilots
Rock You Like A Hurricane by Scorpions
Flying High Again by Ozzy Ozbourne
Throw Some D’s by Rich Boy
Until The End Of Time by Tupac Shakur
Vertigo by U2
Rock And Roll by Led Zepplin
Wicked Garden by Stone Temple Pilots
Gimme All Your Lovin by ZZ Top
Wind Under My Wings by Bette Midler
Naked Sunday by Stone Temple Pilots
Heartbreaker by Pat Benetar
Rock And Roll All Night by Kiss
Twisted Transistor by Korn
Ain’t No Other Man by Christina Aguilera
1999 by Prince
You’ve Got Anotehr Thing Comin by Judas Priest
Spirit In The Sky by Apollo 13
Rusty Cage by Johnny Cash
Fight Or Your Right (To Party) by Beastie Boys
Stacy’s Mom by Fountains Of Wayne
Viva La Vida by Coldplay
This Is The New S**T by Marilyn Manson
Can’t Get You Out Of My Head by Kylie Minogue
Stronger by Kanye West
Days Go By by Keith Urban
Saturday Nights Good For Fighting by Elton John
Wake Up (From The Matrix) by Rage Against The Machine
Rock The Casbah by Clash
Hip Hop Hooray by Naughty By Nature
Stay Fly by Three Six Mafia
Give It To Me by Timbaland
Sun Red Sky Blue by Kenna
Let’s Go by Prince
Renegade by Styx
Second To None (From Transformers) by Styles Of Beyond Feat. Mike Shinoda
Break On Through by The Doors
Summertime by Sublime
Room For One More by Anthrax
Facedown by Red Jumpsuit Apparatus
Living In The Fast Lane by Kenny Chesney
Trippin On A Hole In A Purple Heart by Stone Temple Pilots
Superstar by Lupe Fiasco
Everyday by Oak Ridge Boys
We Don’t Care Anymore by Story Of The Year
Sharp Dressed Man by ZZ Top
Get Back by Ludacris
Figured You Out by Nickelback
We Like To Party! (The Vengabus) by Vengaboys
There They Go (Green Mix) by Fort Minor
Welcome To The Jungle by Guns& Roses
Hella Good by No Doubt
Seek And Destroy by Metallica
Just Push Play by Aerosmith
When Doves Cry by Prince
Magic Stick by Lil Kim & 50 Cent
Only by Anthrax

some of the songs on the list are good… but so much of it is just alternative rock… no indie or underground bands? Fall Out Boy is huge and im pretty surprised to not see them on their. get some more bands. get some pop-punk/pop-rock/indie bands that a lot of people between 16 and 25 listen to.

I would reccomend adding sevearl high energy songs (i.e. Appetite for destruction by Guns & Roses or Slam by Onyx). You want to have adreneline pumping songs. Please let me know when the ride opens beacause I plan on attending opening day.

personally, I would recommend “Symphany of destruction” by Megadeth, or perhaps “Holy Wars” as I believe they would be two EXCELLENT songs for riding with :D:D

Cowboys from hell by Pantera would also be pretty rockin

I recommend Mein Herz Bren by Rammstein, it is a good rush for this ride!

I am sorry I pronouced the songs name it is Mein Herz Brennt by Rammstein.

i really wanted to see the white stripes on that list…..im going to florida in a couple of weeks n the only way im getting on that terrifying thing is if ive got jack white with me in some form 🙂