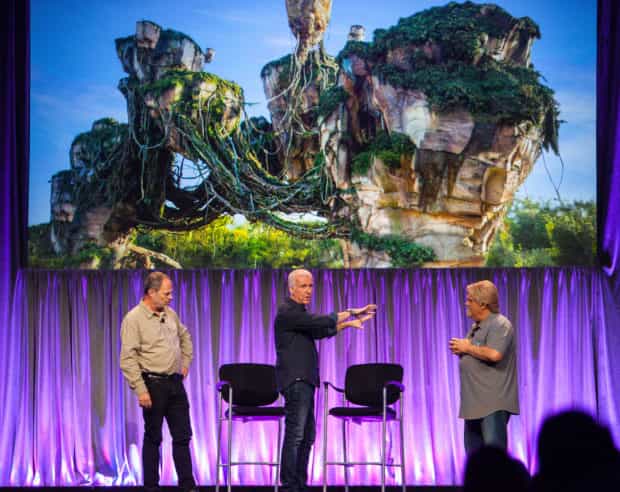 Over the weekend, D23’s Destination D: Amazing Adventures took place at Walt Disney World, giving attendees a first look at several new things coming to the resort. We have put together all of our videos from the event and links to announcements here for you to enjoy.

The first thing guests found out when arriving is that Walt Disney World is getting ready to roll out the all-new MagicBand 2, featuring a new design for the band that will allow for more customizations with accessories. Our video below features a look at the bands, as well as a couple of the accessories coming soon.

Another sneak peek for attendees was the possible future of the Disney Transportation Busses at Walt Disney World. Imagineers set up a prototype “Sorcerer Class” bus outside the Contemporary, and inside guests found redesigned seats, billboards and a new lighting and sound system that produced mini-shows, depending on if someone was having a birthday, a movie that was coming soon, park events or more. Since this bus was just a proof-of-concept, it is not confirmed to be implemented in the future. Imagineers provided this as a fun tease for D23 members at the event.

One of the weekend’s biggest announcements was that Pandora – The World of Avatar would be opening at Disney’s Animal Kingdom in summer 2017. Several new pieces of concept art and details were revealed as well, which you can see and read about here.

Also revealed was new overview art of what Star Wars Land will look like at night when it opens at Disney’s Hollywood Studios in the future. Walt Disney Parks & Resorts Chairman Bob Chapek also announced that he has told Walt Disney Imagineers to “dream big” when it comes to the future of Epcot.

2017 marks a big year for D23 with the return of the D23 Expo in July, but several other events were also announced to be coming in 2017. Events are being planned to celebrate the Disney Afternoon cartoons, Tangled, the 35th anniversary of Epcot, and more.

Finally, many fun and informative panels took place, giving attendees a look at Disney history ranging from the art of Marc Davis to learning about the Adventurelands around the world. While we were not allowed to video any of the panels, we were able to sit down with a few of the presenters afterwards to chat about their panels, which you can see below.

A look at Prince Caspian at Hollywood...