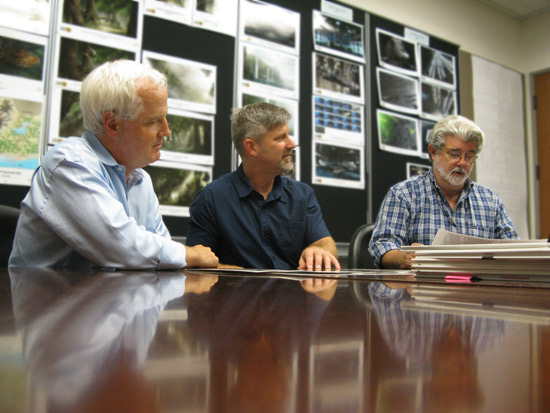 The above image, released by Disney as part of the long-awaited Star Tours update announcement, may offer some clues as to what destinations guests will be traveling to when the popular Star Wars-based ride is updated in 2011.

Here’s a closer look at the images behind them: 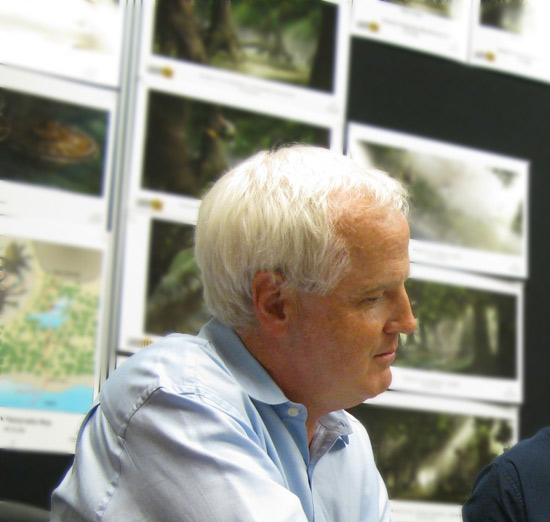 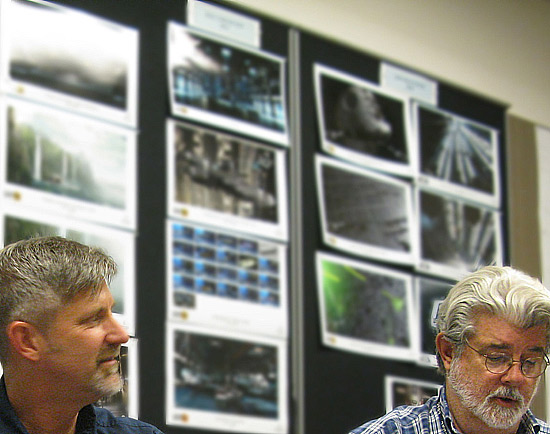 Here’s a list of Star Wars locations we’ve been able to identify as possible future Star Tours destinations based on the above image:

We’re a little rusty on our prequel Star Wars trilogy, so we’d like your help in identifying all of the locations seen in these blurry pieces of artwork. If you look at the full-resolution version of the image above, you’ll notice that the art is not simply out of focus but rather blurred out on purpose (most obvious if you look at the areas around each of the men’s heads). That indicates to us that perhaps these are indeed locations considered for Star Tours II and not just random storyboards placed to look nice in the photo.

Of course, the appearance of any of these locations in the above image in no way indicates that they will definitely show up in the new version of Star Tours when it reopens in 2011, but at least it shows that more is being considered than just pod-racing.

Curious, the Death Star in the Photos looks like Return of the Jedi death star

Or, if the whole ride is going to be set during the prequel era (which the above artwork seems to point to), then perhaps it’s the original Death Star still under construction rather than the second one.

They also have a picture of the slave 1 right behind lucas’s shoulder. Thats boba fetts ship. Not jengos. The pics all the way to the left look to be all from kashyyyk. Im really excited for the new ride. specially if the fetts are in it.

Pure speculation, but the blue pics to the left of the Death Star give me the impression of the underwater segments of Episode 1 (Jar Jar’s Home)

well the possible out for the Naboo scene could be that the StarSpeeder possibly hits Jar-Jar Binks.

It’s not gonna be just the prequel… they released an article on the star wars website where they said the new ride is supposed to incorporate all the movies. I don’t think they’d alienate massive following of the original trilogy

The picture above the other guy’s head looks a bit like Dagobah!