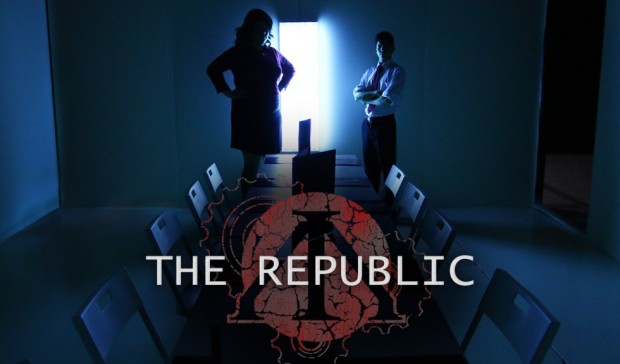 A unique new experience in Orlando called “The Republic” has opened their doors, combining interactive theater with a real-life video game to immerse guests into a new world.

The Republic welcomes 30 “players” into multiple performances weekly, with each attendee receiving a unique role through which they learn and influence the story in this elaborate experience.

While exploring – and getting lost in – an 18,000-square-foot maze of uniquely designed spaces, players cross between three factions, the Republic, the Office, and the Labyrinth, each with its own set of intriguing characters. It is up to the players to decide who to trust, which paths to follow, and ultimately dictate how the story ends through their actions.

“I’m super excited to finally see this unique experience open in Orlando,” said creator Sarah Elger. “I can’t wait to see how the players interact with the world we’ve created and play the game.”

During each 90-minute experience, players are inducted into their roles, introduced to key figures of their new society, and empowered to find their own way through the chaos. Far beyond simply participating in conversation, players are constantly engaged in The Republic as they are sent on missions to solve mysteries, spy, and covertly communicate with each other while deciding which side of a brewing revolution they want to end up on.

With 30 separate roles following 30 separate branching paths, players are encouraged to return to The Republic multiple times, as each visit will unlock new pieces of the story and offer an opportunity to shape its story in an entirely different way.

Featuring a cast of improv performers, The Republic truly embraces players’ actions to alter the show on the fly. No two performances will ever play out in exactly the same way.

The Republic is intended for ages 18 and up only. Players will experience strong language, witness moments of violence and sensuality, and will be touched – possibly even kidnapped. As they say in the video game world, this experience is “rated M for Mature.”

The Republic has five performances weekly through July 25, one on Thursdays, two on Fridays and two on Saturdays. Tickets and more information are available now at TheRepublicGame.com.

See our video coverage of The Republic on the June 4, 2015 episode of Orlando Attractions Magazine – The Show below:

We were involved in a shorter version of this during the Fringe Festival. We thought the premise was good, but we were disappointed in the execution. We were very confused and not really sure what was happening nor what we were supposed to do. My husband and another participant were totally on their own for a while and he was injured while exploring unaccompanied by any cast member.
Perhaps the longer version will make more sense and give more purpose to the participants, but unless things have changed, we would not participate again. Too confusing, too unstructured, and perhaps even a bit dangerous.

The Republic is easily the worst example of immersive theater I have ever experienced – and what’s worse – their marketing is a complete bait-and-switch of what you actually receive once you walk inside. Claims of detailed sets and elaborate costumes are actually – in truth – black plastic tarp stapled to a wooden frame to create “walls” with next to no scenic present beyond that. A tree here. A chair or table there. Absolutely nothing like they directly imply you will receive if you attend. I’ve seen some bad haunts in my travels – but when Six Flags Fright Fest has significantly better production value, you know there’s something wrong. The costumes look like all of their required pieces were obtained at a clearance aisle in Walmart, and then they gave the actors 15 minutes before their shift to hot glue them together into whatever they thought it should be. And on the subject of the actors – or – “actors” – they are a total embarrassment. Over-acting doesn’t begin to describe their “abilities.” Awkward. Forced. Unrealistic – sure. And then there is the engineer character, who has made the intentional character choice to perform as the late Macho Man Randy Savage of WWE fame. And to be clear, not just “like” Macho Man, but AS Macho Man. No joke – ending every sentence with “Ohhhh Yeahhh” and “Dig it!” – at one point in my experience he even started quoting a Macho Man promo from the late 80s talking about the Mega Powers exploding – a storyline that WWF/WWE used when Macho Man and Hulk Hogan were feuding. It was insultingly bad.