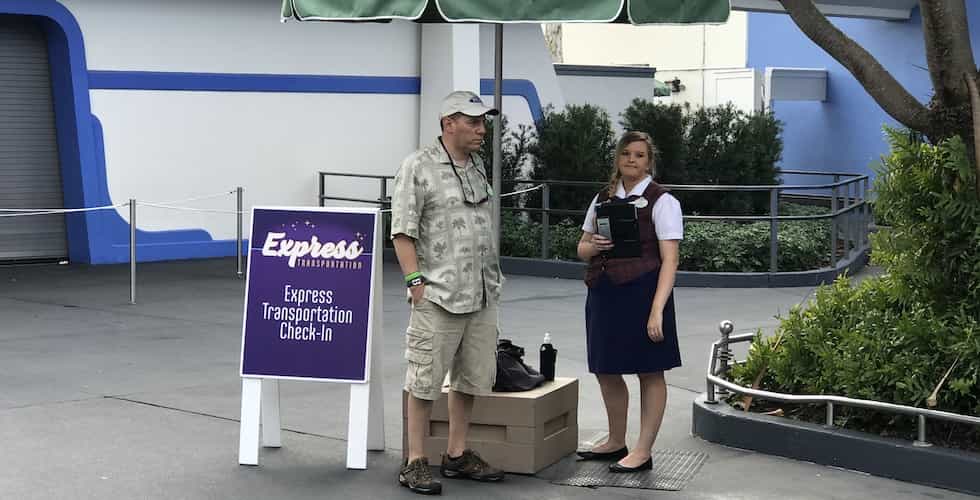 I recently took a weekend getaway to Walt Disney World, meaning I had little time to tackle the parks. Careful planning and strategy would be necessary to get a Disney Parks fix, but then I heard about Disney’s new Express Transportation option. 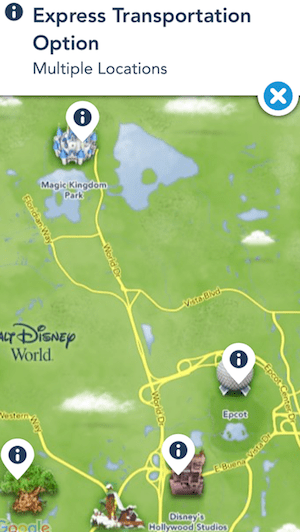 Introduced in December, this service offers Express buses which pick up and drop off guests inside the parks, eliminating the usual hassle that comes with park hopping. With this new add-on, guests can visit all four parks in one day, which was just what I needed. So here’s my account of how I tackled all four of the Walt Disney World parks in a day using Disney’s Express Transportation.

My first encounter with the Express buses occurred during the first day of my trip, which I planned to be laid back, as I had been traveling most of the morning. But after a spin on Toy Story Midway Mania at Disney’s Hollywood Studios, I felt like visiting the Magic Kingdom and using the Express buses to get there.

I headed to the Express Transportation kiosk at the entry of the courtyard just behind Rock ‘n’ Roller Coaster; and honestly, I wouldn’t have known it was there if I hadn’t read about its location online. There was no promotion of the service in the parks and only small signs near check-in indicated where to go.

At the kiosk, a friendly cast member explained how the service works: Buses depart every 30 minutes, but each park’s bus has its own schedule. Basically, a bus to a park departs every 10 minutes; but if the bus going to the park you want to go to just left, you have to wait 30 minutes. Buses leave at their approximate departure time, whether you’re onboard or not, and cast members will escort you to the bus.

Buses pick up and drop off guests in backstage areas, meaning guests will exit and enter at a point already within the park, bypassing security and the turnstiles completely.

There are two Express Transportation tickets to choose from: a single-day for $19 or $29 for up to seven consecutive days. I chose the multi-day ticket, as I planned to use the service for more than one day. It’s a great value at only $4.14 per day if you use it all seven days. Good luck buying a Mickey Premium Bar for that price!

By the time I finished signing up, a bus to Magic Kingdom was waiting. A cast member escorted me backstage where I saw the back of the Twilight Zone Tower of Terror, and signs prohibited photography. If you’ve always wanted to see backstage at the parks, this service will offer more perks than just transportation.

The bus driver was there to welcome me, and the bus pulled away from the curb exactly at departure time and headed towards the Magic Kingdom. I was the only person on board. Exactly 15 minutes later, I stepped off the bus and found myself in a backstage area behind Tomorrowland where I was greeted by another cast member who escorted me into the park. I was able to go from inside Hollywood Studios to inside Magic Kingdom in less than half an hour using the new service. I was totally sold.

My quest to visit all four parks with the Express Buses began at Disney’s Animal Kingdom. I arrived half an hour after rope drop and made a beeline for Creature Comforts aka Starbucks, as is my custom for starting a day at a Disney park. With my coffee in hand, I checked out a meet and greet with Tarzan and studied the artwork at the future entrance of Pandora – The World of Avatar near Tiffins.

As it was Saturday, the wait times for Expedition Everest and Kilimanjaro Safaris were already intimidating and I already had a FastPass+ for Soarin’ later in the day. So I escaped the masses with a stroll through the Maharajah Jungle Trek in Asia and then the Gorilla Falls Exploration in Africa. I caught some of the live entertainment in Africa too before checking in at the Express Transportation kiosk near the entrance to Kilimanjaro Safaris. 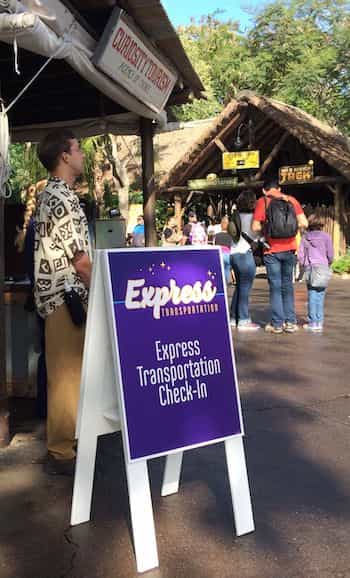 Of the four parks, Animal Kingdom’s Express bus pick-up may be the most convenient, as it’s located at the rear of the park. But it may also be the most unusual. While I don’t want to reveal too much about the backstage area, I will say it’s quite a walk to the Express buses at Animal Kingdom, and you get to see a lot during that trek and from the bus, such as props used in the park and a number of Kilimanjaro Safaris vehicles.

My bus left Animal Kingdom at 10:20 a.m. and arrived at Epcot at 10:42 a.m. where I was escorted into the park near the east side of Spaceship Earth. The backstage area by Epcot wasn’t quite as interesting as Animal Kingdom’s, but there is still stuff to see. Also, once again, I was the only guest on board and was really feeling like a VIP.

As Epcot’s International Festival of the Arts was still being offered during my visit, I took in the living statues and the Mary Blair and Herb Ryman exhibits in the Odyssey. I then began my trek around World Showcase, starting with Mexico as I had a reservation at the Canada Pavilion’s Le Cellier in an hour. After indulging my Le Cellier lunch, I booked it to The Land to cash in my FastPass+ for Soarin’. 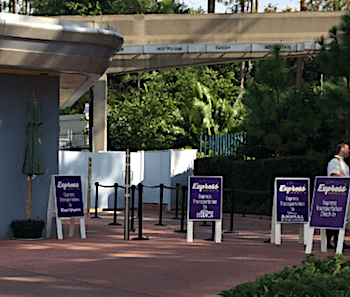 I then decided it was time to hop over to Hollywood Studios. The Express bus to this park had just left when I checked in at the kiosk near Spaceship Earth, so I took about 15 minutes to browse Mouse Gear before heading back to board my bus, which had several families onboard.

I know Epcot and Hollywood Studios are practically neighbors, but I was floored by the fact I was at Epcot at 2:59 p.m. and then by the queue for Rock n’ Roller Coaster at 3:08 p.m.! What further put me over the edge was Character Palooza was happening at the Sunset Showcase, right next to the Express Transportation check-in, when I arrived.

Character Palooza is when characters are brought out to meet and greet with guests at random times. This event is not on a Times Guide and cast members will not tell you when it will take place. You just have to catch it when it happens.
I posed for some photos with Pocahontas with Meeko and Mary Poppins with Bert before heading into the park.

As Hollywood Studios doesn’t have much going on these days, it seemed everyone in the park was in line for Rock ‘n’ Roller Coaster, Tower of Terror and Toy Story Midway Mania. I checked out the Star Wars Launch Bay, poked around the shops on Hollywood Boulevard and caught the Citizens of Hollywood in action, and then dropped in at the Trolley Car Café.

Properly caffeinated for the final leg of my quest, I checked back in at the kiosk by Rock ‘n’ Roller Coaster to catch a bus to the Magic Kingdom. After a 10 minute wait, I and several other families were escorted backstage to the bus.
This bus was the most crowded of my experience so far, but thankfully there were still open seats.

The bus arrived at the Magic Kingdom in 15 minutes; but this time, a cast member wasn’t there to meet us or escort us. I’m not sure, why but the other passengers and I went on into the park. Realizing I completed my quest to visit all four parks in a day, I treated myself to a cream cheese pretzel at the Tomorrowland Lunching Pad to celebrate. Then, I hiked to Fantasyland before squeezing in some time in Adventureland and Main Street, U.S.A.

Whew! That was one busy day, and I was tired, but surprisingly relaxed! Except for that morning, when I had to wait for a bus from my resort to Animal Kingdom, I didn’t feel like time was against me, and the only lines I waited in were for attractions or a snack. Eliminating the logistics had put the vacation back into my Walt Disney World vacation. 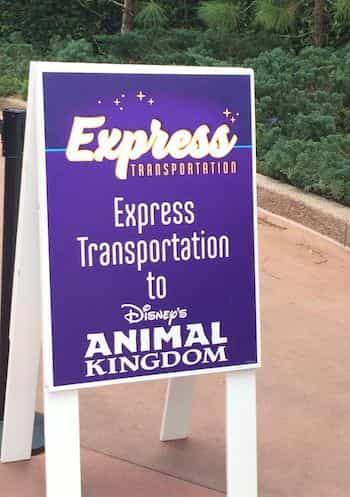 Here’s what else I learned:
• Express Transportation is only for ticket holders with the Park Hopper option or Annual Passholders.
• Guests must check–in with a cast member at a kiosk to board an Express Bus.
The service is about efficiency, not presentation.
• Express buses begin operation at 10 a.m. and conclude at park closing.
• Don’t buy in advance. The single-day tickets are valid for purchase day only and multi-day tickets begin the day of purchase.
• The Express buses don’t service the Disney World Resorts, Disney Springs or the water parks.
• In addition to the kiosks, Express Transportation tickets can be added on at the Disney Springs ticket window, the Swan and Dolphin ticket desks, at your Disney Resort hotel concierge, or at the Disney Parks ticket windows or Guest Relations locations.

Would I use Disney’s Express Transportation again? Absolutely! Guests spend a crazy amount of time at Disney World just waiting; and while much of that is unavoidable, being able to reduce the time and stress associated with transportation, security and park entry is priceless to me.

hello, loved your review of the Express transportation. but what about those guests who need to use a scooter? are the buses capable of boarding them? thanks

Bus service was terrible, they said busses come about every 20 minutes, unfortunately not to the park you need to go, I got to my bus depot at my hotel at 6 pm, within 60 min by bus to Epcot finally came, but within that hour, 7 magic kingdom busses came, 5 blizzard beach busses came, oh not too many people go to water parks at night, that’s why the close early, and 6 Disney spring busses, at least a quarter of them had no one on them, now I have dinner reservations at Epcot and hope to make them, I don’t know who is in charge of the busses but the should be fired
Tony Chicago

Tickets on sale for ‘Drawn to Life’...