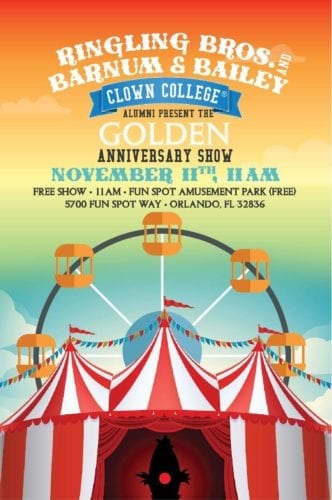 The Ringling Bros and Barnum & Bailey Circus may have folded its tent for good this year, but alumni of the circus’ slapstick school will revive its spirit with a free show at Fun Spot Orlando on Nov. 11, in honor of the Clown College Golden Anniversary.

In 1968, Ringling Bros and Barnum & Bailey Circus (RBBBC) opened the world famous Clown College in Venice, Florida. In the time between its opening, and its closure almost 30 years later, hundreds of “Bachelor of Funny Arts Buffoons” graduated from Clown College and performed with the circus or other entertainment venues around the world, including Tony-winner Bill Irwin and magician Penn Jillette.

Over 200 RBBBC alumni from around the globe are expected to attend their Clown College 50th Reunion in Orlando on Saturday, Nov. 11, and they will be sharing their comical talents with the general public. To honor the Golden Anniversary, the clowns are offering a free show with a pass-the-hat opportunity to benefit local charities. There will be a 70-minute free show at Fun Spot America Orlando beginning at 11 a.m. that will showcase comical talents of graduates of the Ringling Bros and Barnum & Bailey Clown College.

Donate to charity for chances to attend the...

Cirque Magique and Cirque by Night back in...

I graduated from Clown College in 1971.

I graduated from Clown College in 1981 and still to this day it has been opening doors for me.