Orlando-based “Beebs and Her Money Makers” is rocking the Vans Warped Tour this summer, and Ripley’s Believe It or Not Orlando is sponsoring them on behalf of all Ripley’s locations in the U.S. and Canada.

Beebs and Her Money Makers blend psychedelic rock, funk, ska and soul into a high energy performance. Led by the kazoo-wielding Michelle Beebs, the band has played to sold-out shows across the U.S. since releasing their first album, “Welcome to Bartertown,” two years ago. Their new album, “No Sleep Tonight” was released on May 30 and the new single “Jumpin” has crowds, well, jumpin’. 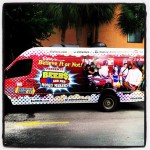 Ripley’s has wrapped the band’s tour bus (the BAHMM Mobile), so fans will notice its “unbelievable” look. The bands’ merchandise and tents will also have a Ripley’s look to them. Discount cards will be handed out at the concert venues, allowing guests half off admission to participating Ripley’s Believe It or Not! Odditoriums. The band also shot the music video for “Jumpin” at Ripley’s Orlando Odditorium.

“We think our visitors and Beebs fans have a lot in common,” said Joe Kasinski, director of Sales and Marketing for Ripley’s Orlando. “They all know how to have fun and are into things that are out of the ordinary. It’s a perfect partnership for us as well as the band.”

Check out a behind the scenes look at the filming of their music video “Jumpin” and an interview with Beebs in the June 13, 2013 episode of “Orlando Attractions Magazine – The Show”:

Meet Iron Man, see the latest film and more at the Science Center

Top 5 Rides at the Magic Kingdom...