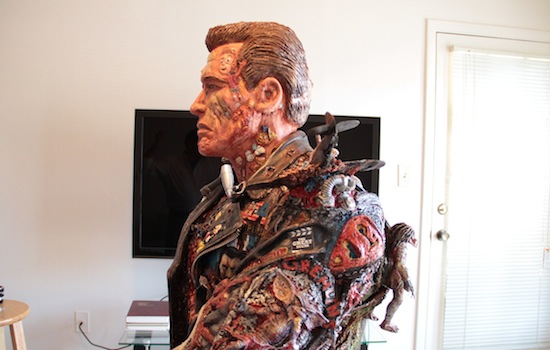 The Terminator is back, just like he said he would be, but this is no ordinary Arnold Schwarzenegger-looking Terminator. This Terminator is on display in the Orlando Ripley’s Believe It or Not, so you know there has to be something odd about it. This Terminator statue pays tribute to some of Hollywood’s biggest stars, fictional and nonfictional. 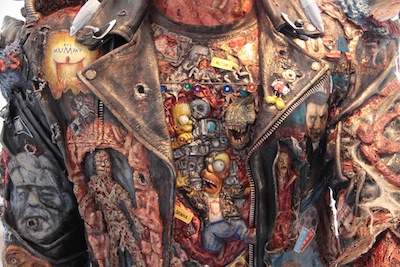 The life-size statue was created by artist Enrique Ramos. It’s covered in three-dimensional scenes from Jaws, Rocky, The Wizard of Oz, Pirates of the Caribbean, Alien, Predator and Harry Potter. There are also depictions of Tinseltown’s biggest box office draws – everyone from Charlie Chaplin to Mickey Mouse to The Simpsons to Johnny Depp and many more.

“Mr. Ramos has been a part of the Ripley family for over 20 years, supplying us with many fantastic exhibits,” said Edward Meyer, Ripley’s vice president of exhibits and archives. “This piece, however, is his opus – his 9th Symphony – both in complexity, detail and historic scope. He has virtually told the history of the film industry in one spectacular sculpture.”

The Terminator statue took five months to create, using a variety of media – clay, resin, paper, plastic – even a real vampire bat! Ramos plans to make a motorcycle in the same style to complete the work. Both pieces will go on display at Ripley’s Hollywood Odditorium following its renovation later this year.

Ripley’s Odditoriums are home to several amazing works of art created by Ramos, as well as his son Christiam. Those include a portrait of Elvis created from dozens of smaller portraits of Elvis, Beyoncé created entirely from candy, the history of Mexico painted on butterflies and Princess Diana painted on ants. 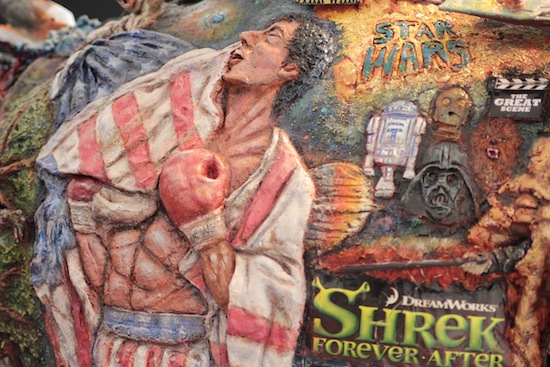 Stars in the Parks: Dancing with the Stars of Beauty and the Beast