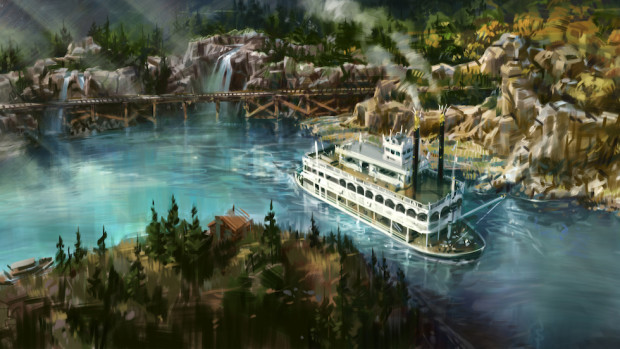 With the addition of a Star Wars land at Disneyland Park coming soon, plans for a new waterfront in Frontierland, along the north bank of the Rivers of America, have been revealed.

An artist’s rendering, courtesy of Walt Disney Imagineering, illustrates the new riverbank, complete with an elevated trestle over which the iconic Disneyland Railroad will travel. The Mark Twain Riverboat and Sailing Ship Columbia operate along the Rivers of America. Pirate’s Lair on Tom Sawyer Island — a mysterious place rumored to have hidden treasure — is surrounded by the river. See the full-res image below.

The developments along the Rivers of America are in preparation for a new, 14-acre Star Wars themed land, with groundbreaking scheduled this year. Attractions and experiences that are temporarily closed due to the planned construction include The Mark Twain Riverboat, Sailing Ship Columbia, Pirate’s Lair on Tom Sawyer Island, Davy Crocket Explorer Canoes, Fantastmic and the Disneyland Railroad. The Big Thunder Ranch area has closed for good, with Disney announcing the animals have moved to a new home.

As the expansion unfolds, Disneyland guests will have unique, limited-time opportunities to experience some of the attractions in new ways. At the Main Street and New Orleans Square Train Stations, guests will be able to get up-close to the historic steam engines that have circled Disneyland for decades, learning more about these machines firsthand from the train engineers.

Additional fun experiences will be announced throughout the year on the Disney Parks Blog.

Celebrate 90 years of Mickey Mouse with...