The Rumor Queue: On the importance of criticism 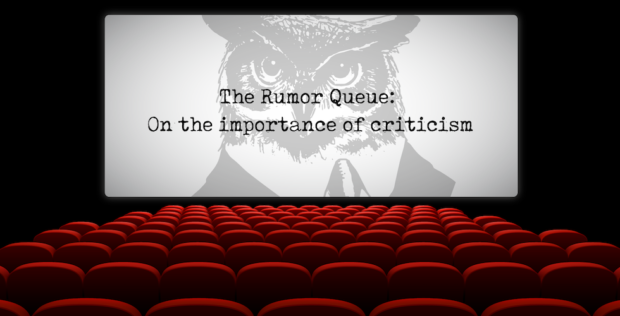 I’m going to diverge from the mold I’ve followed for this column and speak about something of great importance. The theme park industry is inextricably linked to the movie business. Without film, the modern theme park industry wouldn’t be the same and, frankly, my first love will always be going to the movies, even though I have to sneak my own snacks into the theater because concession stands don’t sell rodents.

Another medium I hold dear is comics — titles such as Spider-Man, Batman, Superman, Ant-Man, Guardians of the Galaxy, Doctor Strange and The Hulk are among my favorites — so you can imagine I was excited for “Batman v Superman: Dawn of Justice” … And the movie ultimately took the wind out of my wings and sent me plummeting to the ground with a loud thud.

“Batman v Superman: Dawn of Justice”, a movie wherein the title is just one of its many problems, released to a negative critical response and, per Box Office Mojo, an opening weekend box office gross that was below the domestic openings of “Iron Man 3” and “Avengers: Age of Ultron”. The film’s stars and director rebuffed its negative critical consensus and said it was “made for fans”, not critics, as if the two are separated by an impenetrable wall and critics are grim, soulless husks who derive pleasure from nothing because they’re not the ones buying tickets. This a dangerous train of thought, as it postulates that critics can’t judge a film for its own merits because they attend press screenings for free. While critics attend press screenings for free, they aren’t paid as well as you’d think and don’t have access to benefits people with traditional jobs take for granted. It also places a negative connotation on criticism, which I refuse to accept. Nothing is immune to criticism. I’ve learned a great deal from criticism and my work has improved as a result of it. Criticism isn’t an inherently bad thing.

“Batman v Superman” — I’m not going to include the subtitle anymore because I have yet to understand what it means beyond an unsubtle reference to “Justice League” — showed a significant drop of 55% from Friday of its opening weekend to Sunday. The film also suffered a box office drop of 69% in its second week, a trend which continued throughout its subsequent weeks of release. If you break down the numbers and juxtapose the box office performance of “Batman v Superman” with a better received (although R rated) superhero film “Deadpool”, you’ll see that despite the latter’s smaller budget and more restrictive MPPA rating, it’ll likely maintain a higher domestic (North American) gross than “Batman v Superman”, which is unprecedented. Of course, the worldwide gross of “Batman v Superman” is higher and the film isn’t a financial “bomb”, but it still begs the question, why did the film perform under expectations and suffer the subsequent drop? It shouldn’t have limped its way to the finish line.

The past few weeks have run fandom through the gamut of emotions and things have worsened with the release of “Captain America: Civil War”, which, full disclosure, I enjoyed more than “Batman v Superman”, although I do have problems with “Civil War”. They’re hard not to compare as they both tackle similar themes and are of the same genre, and yet “Batman v Superman” fell flat while “Civil War” soared for me despite its flaws. It’s fine if you like “Batman v Superman”. I’ve no qualms with people who like things I don’t like and vice versa. What I take umbrage with is the backlash against critics by certain diehards in the community.

There has been a litany of negative comments on social media about critics and absurd claims that there’s a conspiracy against DC Films. The critics are “Marvel shills,” per incensed fans. There have been think pieces published since questioning the relevancy of critics and many self-proclaimed fans have turned against critics entirely with some resorting to harassment to get their point across. This isn’t to say that critics operate with impunity. Critics should be able to take criticism, although it should serve a constructive purpose. Baseless conspiracy theories don’t count as constructive by any stretch, much less criticism.

A rational, mature response is that critics do matter. A large box office haul doesn’t prove the critics “wrong”. Critics aren’t predicting a work’s financial success; they’re reviewing the work itself. Hence why using box office results as a repudiation of a critical consensus is flimsy. It was inevitable that “Batman v Superman” was going to have a large opening weekend due to it featuring two of the most iconic characters in the world. Many expected its first weekend to be “big”. Its long-term performance was predicated on its quality and whether or not it resonated with an audience, and all of the metrics we use to try to obtain a measurement for the quality of a movie seem to indicate it didn’t resonate.

Criticism is essential. If there is art, there must be criticism. Many filmmakers have learned a great deal about filmmaking by poring through the thoughts of critics in their formative years. This isn’t to say that artists must behave slavishly toward critics or that critics are unilaterally right, or that you can’t go against the grain. You can like what you like — and speaking from one’s perspective — it doesn’t matter in the grand scheme of things whether a film was rated “fresh” on Rotten Tomatoes or if it made oodles of money at the box office. What matters is what you enjoy. So why is this portion of the fan base obsessing over the negative things and resorting to harassment to make their point?

A common argument I’ve heard is that critics have a “Marvel bias,” hence their negative reviews for DC films, a claim that can be repudiated with ease. Reviews are inherently subjective and critics judge a film by whether they feel its good or bad, not by what studio label is attached to it. Furthermore, we’re all biased, including the section of diehard fans lobbing insults at people who have opinions they don’t like. The adversarial approach these fans are taking against critics comes from a protective place. You can like DC and dislike the current state of the DC Cinematic Universe. This isn’t a civil war; it’s nerd culture that’s now pop culture. It’s never been a better time to be a nerd and we should celebrate it, not spew venom. Film critic Drew McWeeny encapsulates this in a great editorial featured on HitFix.

Critics aren’t telling you how to feel; they’re stating how they feel. Critics use their insight, education (not only on film), and an array of experience in the medium to criticize a product. That means saying what they liked, what they didn’t like and offering a recommendation based on their taste. Their reviews are primarily subjective because an entirely objective review would be tantamount to watching paint dry while a Coldplay album plays on a loop. Critics can offer insight and alternative perspectives. They can engender thought about work and perhaps change the way you look at something, or perhaps not. They can show what a refined selection of entertainment looks like and help you develop your own taste, or reinforce the taste you have.

A film’s place in the public consciousness changes and the results are more nuanced in the long-term, and critics can shift the public tide. Pauline Kael was an influential American critic who wrote for “The New Yorker” from 1968 to 1991, and whose collection of writings from 1954 to 1965 were used for her seminal novel “I Lost it at the Movies.” She helped change the initial mixed consensus for “Bonnie and Clyde” and the film later was rereleased and reconsidered by critics and moviegoers. Other critics butted heads with her and readers didn’t always agree with her opinions, but her reviews are still insightful and erudite, and one can respect where she was coming from when she wrote them, even if they don’t agree with her.

I’ve read positive critical reviews that made me roll my eyes and cluck my bill, and I’ve suffered through negative reviews that made me twist my head around and stomp my talons. A bad critic is a bad critic, no matter if I agree or disagree with them. The presence of bad critics doesn’t negate the entire field of criticism, just as the presence of bad people amongst fandom doesn’t mean all of fandom is awful. What matters is a critic’s perspective, and as long as you can understand their criticism and their work engenders thought, they’ve done their job. We don’t learn from being told things we already know and being fed opinions we already have. Having your thoughts challenged can help you hone your opinion and refine your taste. It can also reinforce why you like something.

It’s not one thing that caused “Batman v Superman” to perform below critical and financial expectations. There’s no conspiracy. It’s an underwhelming film and there’s no greater poison to a movie’s long-term success than poor quality. Criticism is bigger than one movie, genre, or even medium. It’ll continue to evolve and persist throughout the ebb and flow of entertainment trends. Even if it needs if takes on a different permutation to do so, criticism will continue to exist. It must.

See both ‘Finding Nemo’ and ‘Finding Dory’ at Dory After Dark