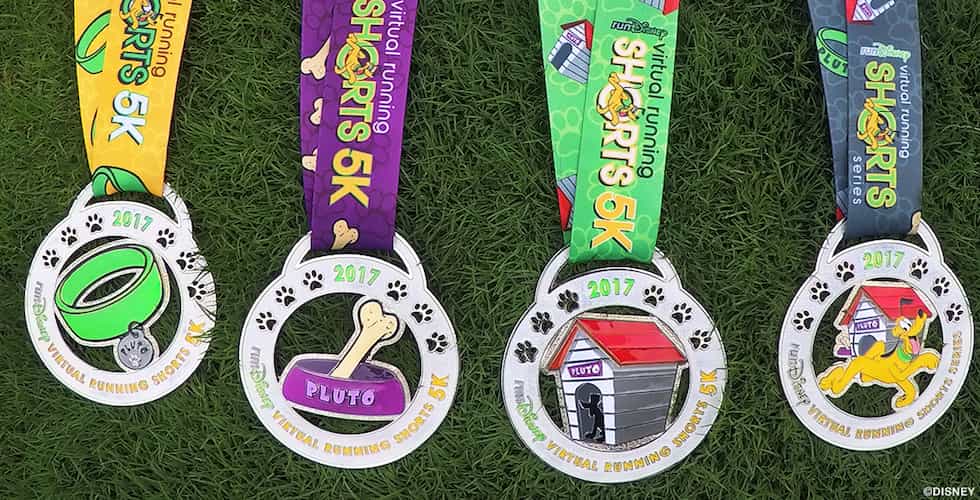 Examples of the medals that runners can win for completing the Virtual Running Shorts Series.

The runDisney Virtual Running Shorts Series has now opened up registration for its summer races this year, which includes three 5Ks. This running series allows runners to enjoy the fun of a runDisney race at home.

The host of the series is none other than Mickey’s best pal, Pluto. He hopes to encourage everyone, on two legs or four, to spend their summer running anywhere they can – in the park, at home, on the treadmill or through the neighborhood.

The series begins this June, with the first 5K. Participating runners must complete the 3.1 miles during each month in order to receive the specially-designed medal that corresponds with the race: a Pluto Dog Tag medal for June, a Pluto Dog Bowl medal for July and Pluto’s Dog House medal in August.

For runners that complete all three 5Ks during the summer series, they receive a special medal featuring Pluto himself, as well as all three 5K medals. This series is also represented by a charity, which is the Pet Alliance of Greater Orlando. This year they’re celebrating 80 years of saving pets in Central Florida.

For more information on the runDisney Virtual Running Shorts Series, as well as to register for the races, visit rundisney.com.

Followed the link to the website but couldn’t find where the information was for this event. Seems like a really fun idea as I’m in the UK so wouldn’t normally get to do any Disney Running events.