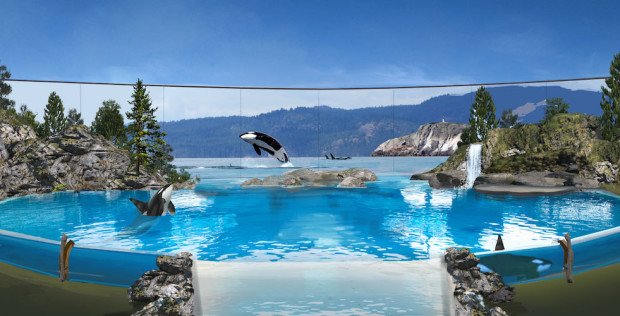 A look at the SeaWorld San Diego Orca Encounter. (Supplied by SeaWorld)

SeaWorld has announced that the killer whales in their care will be the last, as they will no longer breed the orcas and will be ending all their killer whale shows over the next few years.

In place of the shows, SeaWorld will introduce new natural orca encounters as part of its commitment to education, marine science research, and rescue of marine animals. These programs will focus on orca enrichment, exercise, and overall health. This change will start in the San Diego park next year, followed by San Antonio and then Orlando in 2019.

The current population of orcas at SeaWorld – including one orca, Takara, that became pregnant last year – will live out their lives at the company’s park habitats, where they will continue to receive great care based on the latest advances in marine veterinary medicine, science and zoological best practices. Guests will be able to observe these orcas through the new educational encounters and in viewing areas within the existing habitats. Recently SeaWorld announced that one of their oldest and largest whales, Tilikum, has a bacterial lung infection, and is nearing the end of his life.

SeaWorld also announced today a new partnership with the Humane Society of the United States to help educate their more than 20 million annual guests on animal welfare and conservation issues through interpretative programs at the parks and expanded advocacy for wild whales, seals, and other marine creatures.

“SeaWorld has introduced more than 400 million guests to orcas, and we are proud of our part in contributing to the human understanding of these animals,” said Joel Manby, president and chief executive officer of SeaWorld Entertainment. “As society’s understanding of orcas continues to change, SeaWorld is changing with it. By making this the last generation of orcas in our care and reimagining how guests will encounter these beautiful animals, we are fulfilling our mission of providing visitors to our parks with experiences that matter.”

“SeaWorld’s commitment to end breeding of orcas is a long-held goal of many animal advocacy organizations, and we commend the company for making this game-changing commitment,” said Wayne Nacelle, president and CEO of the U.S Humane Society. “Today we turn a corner, working together to achieve solutions on a wide set of animal issues including sunsetting the use of orcas at existing facilities; maximizing SeaWorld’s focus on rescue, rehabilitation and advocacy for marine mammals in the wild; and sourcing food for animals and customers from humane and sustainable sources, including cage-free eggs and crate-free pork.”

SeaWorld has committed $50 million over the next five years towards being the world’s leading marine animal rescue organization, to advocate for an end to the commercial killing of whales and seals and an end to shark finning.

SeaWorld hasn’t collected an orca from the wild in nearly 40 years, and the orcas at SeaWorld were either born there or have spent almost their entire lives in human care.

Update: SeaWorld CEO Joel Manby revealed a few more details in a conference call with investors and the media. The parks’ current orcas “will be under [SeaWorld’s] care for decades” to come, and given their expected life span the killer whales could still be on display “20, 30, 40, 50 years from now.”

In addition, the $300 million Blue World project that was announced in 2015 has been “significantly trimmed.” Instead of getting huge new environments to live in, SeaWorld will improve the guest viewing areas around the orcas’ existing tanks.

Almost all great news. Interesting, though that after making such a big deal about giving them bigger, more humane habitats that they’ve now canceled those.