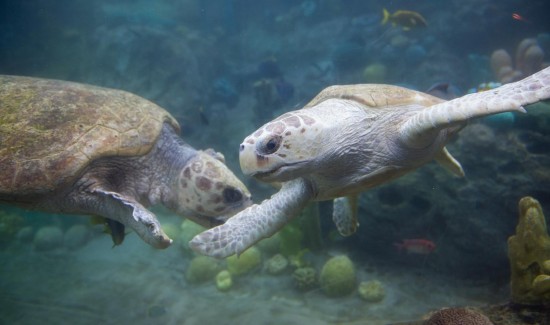 Big Mama, a 245-pound adult, was transported to SeaWorld from the Institute for Marine Mammal Studies (IMMS) in Gulfport, Miss., where she had been receiving care since she was rescued after an oil spill off the coast of Louisiana in 2010. Big Mama suffered from severe bite wounds to her front and hind flippers, making it difficult for her to swim properly. In 2012, Big Mama was deemed non-releasable, and due to space limitations, IMMS could no longer care for her.

Caton, a 95-pound sub-adult, was rescued in 2009 by the Georgia Sea Turtle Center (GSTC), who found her stranded on Blackbeard Island off the Georgia coast. GSTC spent months rehabilitating Caton, but when she was healthy enough to be returned to her natural environment, Caton had other plans. The GSTC attempted to return Caton not just once, but three times. After the third return, government officials deemed her non-releasable.

The pair joined 14 other rescued sea turtles, including a hawksbill, 10 green and three loggerheads, which have also been deemed non-releasable. These turtles serve as ambassadors for their species, helping to educate guests about wildlife conservation and how they can make a difference with everyday actions. So far this year, SeaWorld Orlando has rescued 52 and returned 45 sea turtles.

In collaboration with the government and other members of accredited stranding networks, SeaWorld Parks & Entertainment operates one of the world’s most respected programs to rescue ill and injured marine animals, with the goal to rehabilitate and return to the waters. SeaWorld animal experts have helped more than 22,000 animals in need – ill, injured, orphaned and abandoned – for more than four decades.

A look at Disneyland’s Half Marathon Weekend 2013

=’) d’awww that’s nice for the injured turtle to live in SeaWorld Orlando.