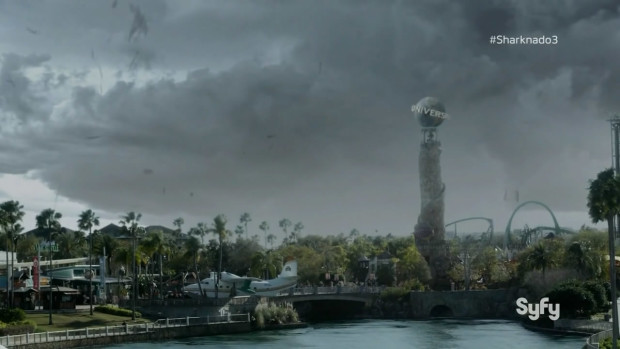 From Daytona to Kennedy Space Center and Universal Orlando, Central Florida really was one of the stars of Sharknado 3. Let’s discuss what went down in the Theme Park (or maybe Sharknado) Capitol of the World.

Universal Orlando seemed to be a star of the film, getting lots of screen time. Some people may find that corporate synergy off-putting, but for locals and theme park fans like me, we loved every second!

The first shot of the park is actually meant to be Washington DC. During the opening scenes, our hero Fin Shepard (Ian Ziering) is traveling to the White House and comes across a road blocked by protesters. This was shot in the New York streets of Universal Studios Florida. Only locals and those who’ve been to the park a lot would probably catch that, but it was kinda weird cutting from scenes actually shot in DC to Universal then back to DC. Though I love that they inserted the White House into the background. 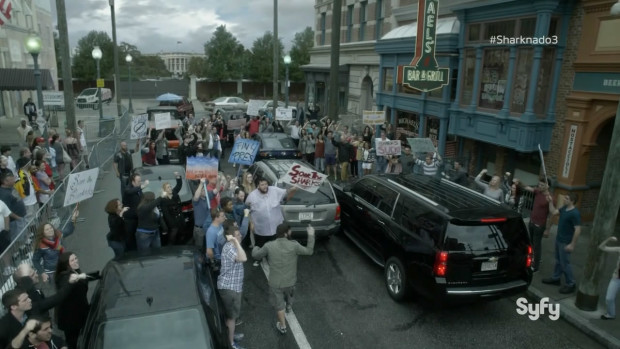 From there, most of the next scenes at Universal are before the sharknado hits, and each one really feels like a commercial for the park with sunny shots of the rides, etc. Again, I’ve heard that some people hated that, but for me, the more Universal the better! Even Universal President Bill Davis made a cameo. 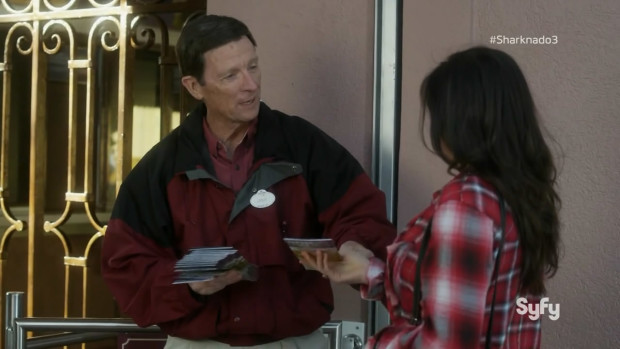 On their way to Orlando, Fin and Nova Clarke (Cassie Scerbo) fly a jet over Daytona International Speedway during the Daytona 500. A sharknado hits causing a giant crash, with one shark taking out a driver. 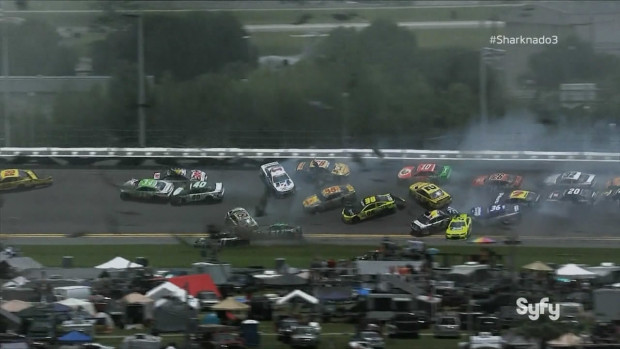 When the sharknado starts approaching Universal, it hits Cabana Bay Beach Resort first, with a shark landing on the pool slide and sliding down. This is an example of just one of many crazy visuals this movie produced. The Universal Orlando locations showcased in the film included Cabana Bay, Hollywood Rip Ride Rockit roller coaster, Twister… Ride It Out and Disaster! 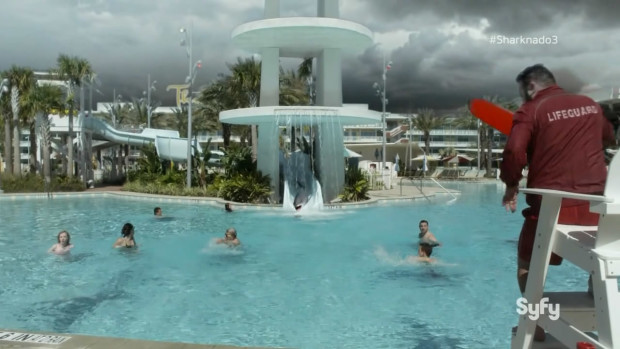 Speaking of Disaster, that scene produced my personal favorite shark kill. As the sharks swim down with the water finale of the ride, Claudia Sheperd (Ryan Newman) reaches for a selfie stick and takes a shark out with it. Maybe now Disney will reconsider banning them after seeing the good they can do. 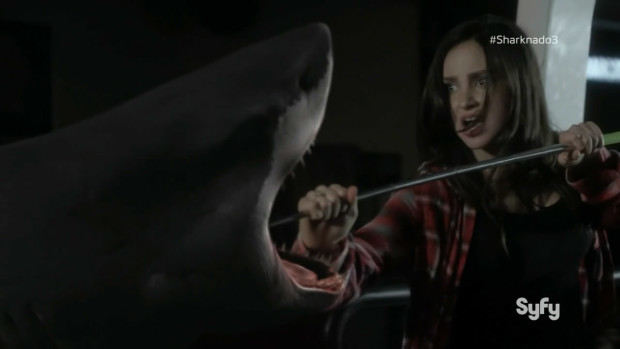 Bruce, the shark from “Jaws”, gets a cameo as well, with Jerry Springer as a tourist wanting a photo with it. It turned out, somehow a real shark replaced Bruce and it devours the Jerry. I’m so happy they were able to use Bruce in the film, especially in such an over-the-top manner. 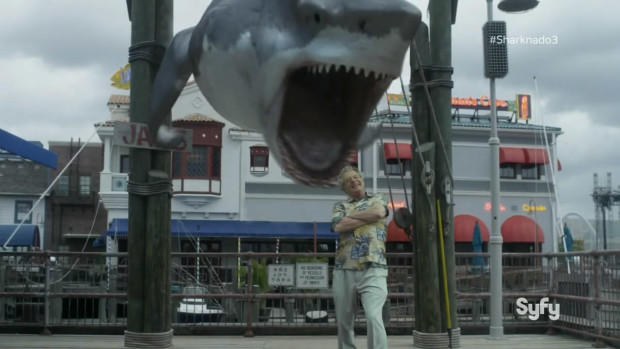 Out of all the attractions, Rockit gets the most screen time. When sharks land on the track, the ride e-stops with Bruce the ride attendant (Chris Jericho) and April Wexler (Tara Reid) climbing up to save passengers and find Claudia. Fin is also trying to find Claudia, climbing up Rockit’s evacuation stairs. At the top, Fin and April are reunited, but only briefly. A shark lands on the track and begins riding it, coming up and taking Bruce out, causing the train to start moving with Fin trapped inside. When it hits another shark stuck on the track, it derails and flies through the air, landing on top of the Twister show building. This was one of the visuals that made me laugh out loud. Thank you Universal for being so open in letting them do this in the film! 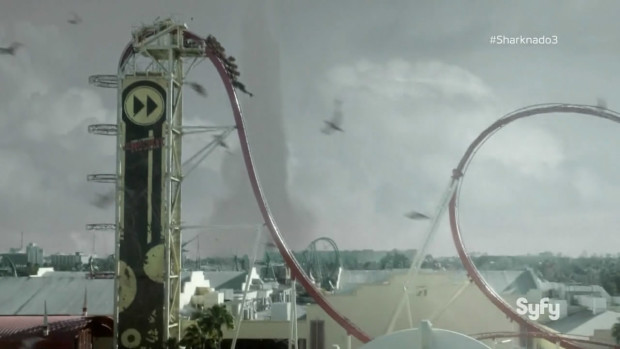 That moment leads to Fin falling onto the set of Twister while the show is going on. A shark lands there as well, and after taking it out with a double chainsaw, the lights come on revealing a very shocked audience, who then cheer for Fin. This is also the scene where I made my cameo in the front row of the audience. Maybe Universal will consider changing Twister to a Sharknado ride? 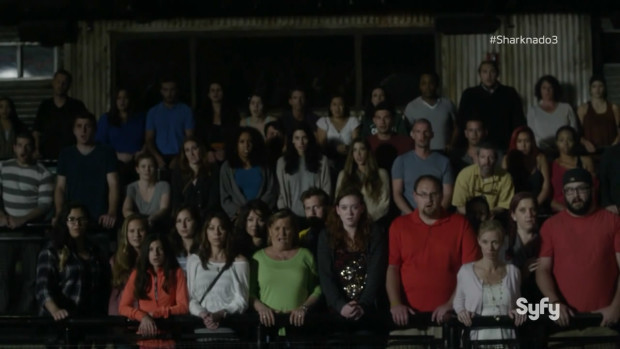 The next scene was my absolute favorite. As the gang is looking for a place to take shelter, they decide to do so inside the Universal globe in front of the park. Unfortunately, that was a bad idea as the sharknado knocks the globe loose, causing it to begin rolling through CityWalk. Notice how the icon of Universal doesn’t roll over a single person, but it does take out a shark. After being lifted into the air, the globe lands on top of the Islands of Adventure lighthouse, providing another amazing visual. 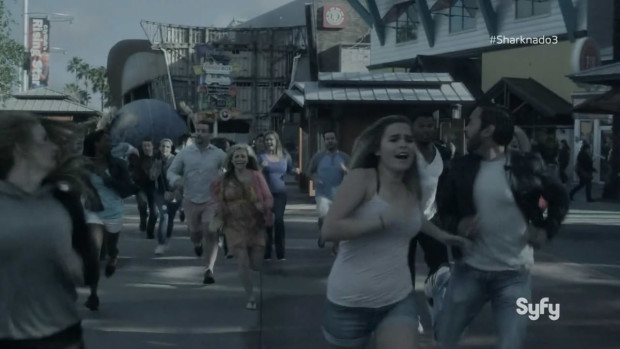 The third act moves from Universal Orlando to Kennedy Space Center. Some shots were actually done there, including inside the Vehicle Assembly Building, but the majority were filmed backstage at Universal Orlando. Some of the buildings at NASA look suspiciously like Universal soundstages. I won’t spoil the rest because it is too out-of-this-world, but it is the wackiest third act and ending of a film I have ever seen! How can they top this in Sharknado 4?! 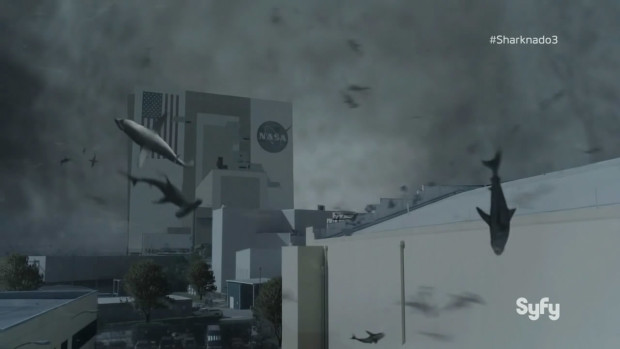 There’s no word on when “Sharknado 3: Oh Hell No” will be released on Blu-Ray/DVD, but it will re-air on SyFy this Saturday at 7 p.m. and it’s available to watch online at SyFy.com/Sharknado3.

Take a look at our behind-the-scenes video of the filming below:

I agree, the more Universal stuff I saw in the movie made me like it even more.