‘Significant expansion’ announced for The Wizarding World of Harry Potter 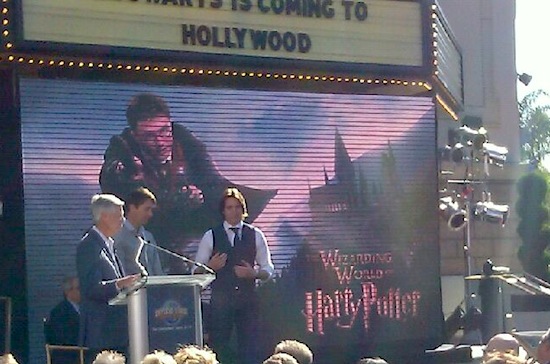 “We are thrilled to be able to share this experience with our guests in Hollywood,” said Tom Williams, Chairman and CEO, Universal Parks and Resorts. “And we are thrilled to take what has been created in Orlando to even greater levels.”

“I am delighted that The Wizarding World of Harry Potter has been so popular with fans since the opening in Orlando last year and I am sure that the teams at Universal and Warner Bros. will bring their expertise and attention to detail to Hollywood to make this new experience equally as exciting,” said J.K. Rowling.

“The announcement of our partnership with Universal to bring The Wizarding World of Harry Potter to Hollywood and expand what already exists in Orlando is probably the best holiday gift we could give to the legions of Harry Potter fans worldwide,” said Barry Meyer, Chairman & CEO, Warner Bros. “Everyone involved with these projects is committed to continuing the enchantment of J.K. Rowling’s masterful books as they were brought to life on screen in our eight films and dedicated to extending the magic of the experience for generations of fans to come.”

“This is an incredible moment for Universal Studios and the millions of guests who visit our theme parks,” said Ron Meyer, President & COO, Universal Studios. “The Harry Potter stories are some of the most powerful of our time and we are honored to expand our Orlando experience and bring The Wizarding World of Harry Potter to Hollywood, forever changing family tourism in Los Angeles.”

The Wizarding World of Harry Potter at Universal Orlando Resort opened in June 2010 and immediately captured global attention. It is a spectacularly themed land that includes Hogwarts castle, Hogsmeade and multiple themed attractions. Specific details of its expansion will be announced over time.

Rumors say the expansion of the Wizarding World at Universal’s Islands of Adventure will not be in that same park, but in Universal Studios where the jaws ride is currently located. Jaws is scheduled to close in Early January, 2012. Click Here for the full story about Jaws and its rumored replacements.