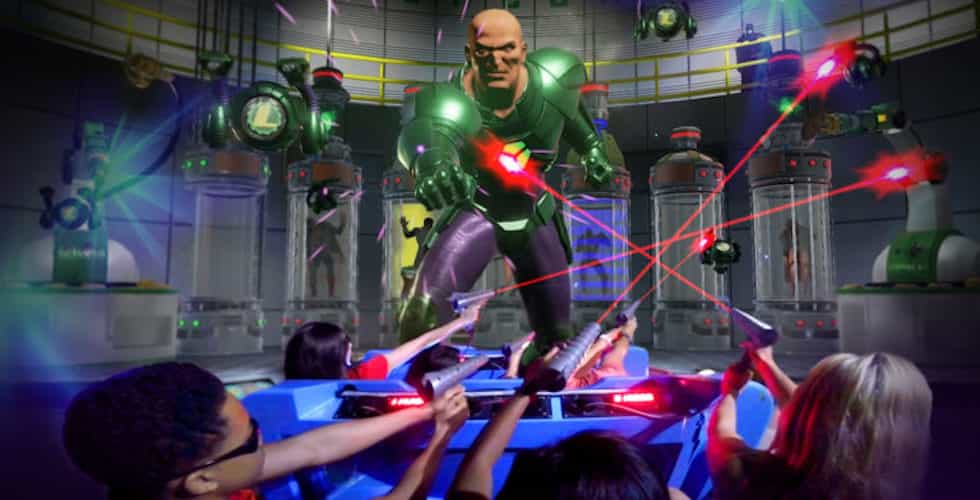 Justice League: Battle for Metropolis and the rest of Six Flags Magic Mountain’s rides will soon run on sunshine, thanks to new solar power generating carports.

Guests at the Discovery Kingdom and Magic Mountain amusement parks in California can soon ride on sunshine while keeping their cars cool, because Six Flags has announced plans to cover their parking lots with solar power panels.

“We are committed to making all of our properties more energy efficient and sustainable for years to come,” said Six Flags Senior Vice President, Investor Relations and Treasurer, Steve Purtell. “California’s support of renewable energy, the solar potential in the state, and the environmental benefits associated with solar energy made this the right decision for our guests, our team members, and our communities.”

JLL will select a renewable energy independent power producer to build, own and operate the systems in California. Once completed, the solar system at Six Flags Discovery Kingdom will exceed 7 megawatts of electricity generated. Six Flags Magic Mountain’s system will have capacity for nearly 15 megawatts and will be the largest solar carport anywhere in North America.

“From the onset, JLL worked with Six Flags to identify the benefits of implementing this renewable energy purchasing strategy and hosting the projects on-property,” said Blake Lacher, Managing Director, JLL Capital Markets, Americas. “Bringing all of the partners together early on in the process allowed for greater transparency in ensuring the objectives were clearly identified. Timely and clear communication with stakeholders and decision-makers on all sides was imperative to reach this milestone.”

“Six Flags has pioneered a long lists of firsts in its 57-year history and as good stewards of the environment, we are excited to apply the latest green technology and create eco-friendly parks for future generations to enjoy,” added Purtell.

For more information about Six Flags parks, visit sixflags.com and watch these videos:

Efteling theme park to be climate positive by...

Light up the night at Six Flags’...