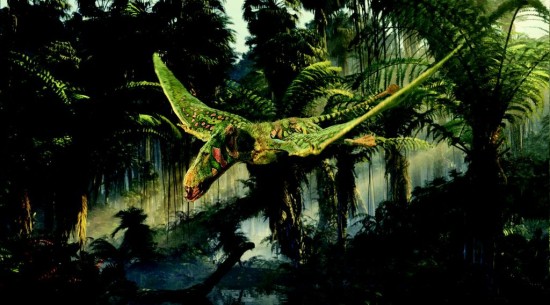 The Digital Adventure Theater: A National Geographic Experience opened “Flying Monsters 3D,” which promises to immerse audiences in a prehistoric world inhabited by pterosaurs. These flying vertebrates have a wingspan of up to 45 feet and lived alongside dinosaurs.

More than 220 million years ago, dinosaurs were beginning their domination of Earth. But another group of reptiles was about to make an extraordinary leap: pterosaurs were taking control of the skies. The story of how and why these mysterious creatures took to the air is more fantastical than any fiction — and one of the greatest mysteries in paleontology. How did lizards the size of giraffes defy gravity and soar through prehistoric skies?

Applying the same state-of-the-art 3D CGI technology that was used in “Avatar,” “Flying Monsters 3D” also employs pioneering scientific techniques that reveal new details about pterosaurs. From discovering pterosaur embryos that show they might have flown from birth, to figuring out how a creature the size of a giraffe could possibly fly, “Flying Monsters 3D” will resolve mysteries that have intrigued scientists for more than two centuries.

The movie will be showing at Orlando Science Center through fall 2013.

It’s included with admission to Orlando Science Center, which is $19 for adults and $13 for youth. Tickets also include access to all four floors of exhibits, unlimited educational films, one Hollywood feature film and live presentations.

Visit Legoland Florida this month to get...