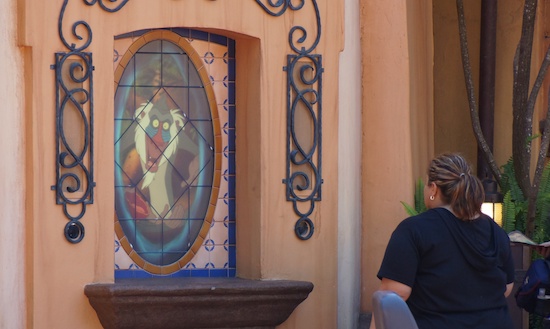 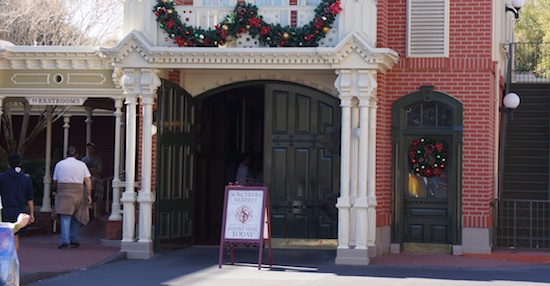 Guests will start out at the fire station, near city hall. Look for a sign indicating they’re looking for sorcerers. 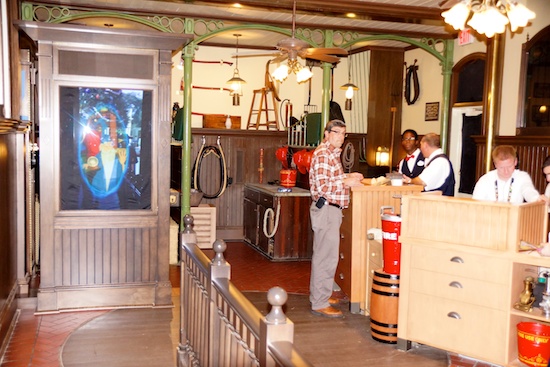 Once inside, cast members will give you a map, a key card and five spell cards. They they’ll take you to a screen they call a mystic portal where you’ll first meet Merlin the magician, who along with the cast member, explain how to play.

Here’s a look at the cards we were first given. Although along the way we ran into some other guests playing the game and traded some of our cards for theirs. There are 70 cards in all, so it will take quite a few games to collect them all. 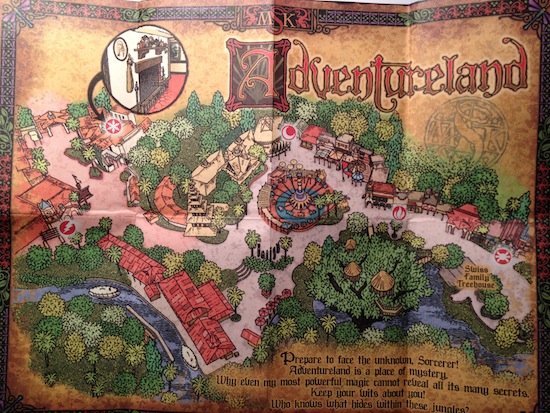 This is the map guests are given. Besides Adventureland, other areas of the map show Fantasyland, Main Street, and Liberty Square with Frontierland.

Each land features a few different story lines, each based on a different Disney movie. You may be interacting with characters from The Emporer’s New Groove in Adventureland, or Pocahontas or The Princess and the Frog in Frontierland. 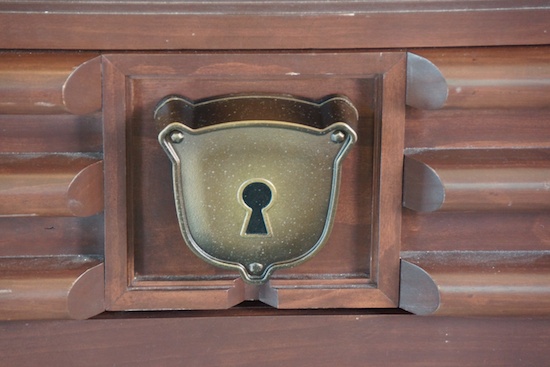 Once you arrive at the right location, look for this keyhole, then hold your keycard up to it to “open the portal”. 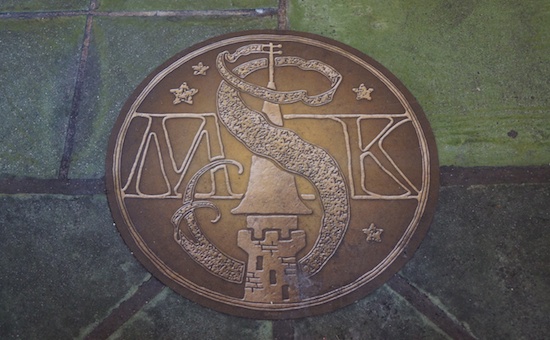 It’s also important that you find this symbol on the ground and stand here for the game to work properly. 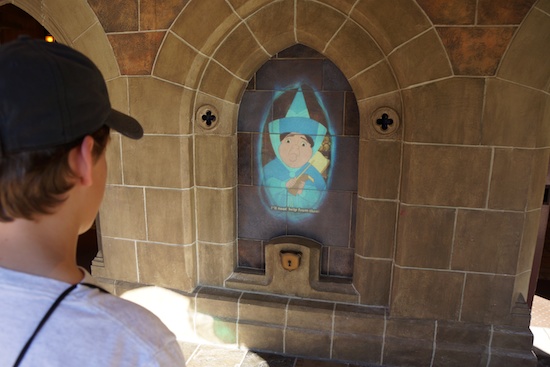 Before it’s open, the “mystic portal” may look just like a wall, or a poster, or it may be part of a larger window display.

During the game, Disney characters onscreen will tell you a story about how Hades has teamed up with the bad guys from a particular Disney movie (such as Lion King, Sleeping Beauty, etc.) and they need you to help stop them.

At the end of the presentation in each location, you’ll be told which symbol on the map you need to look up and head to next. There are five play areas in each land. You may visit them all during your game or you may visit a spot more than once. 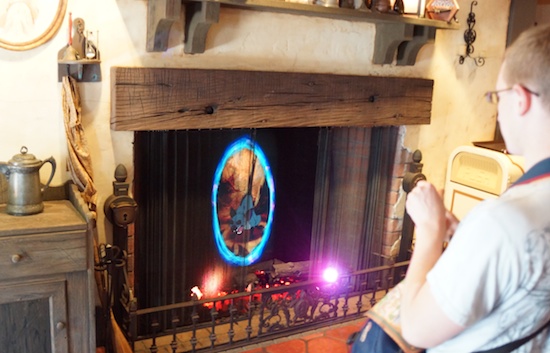 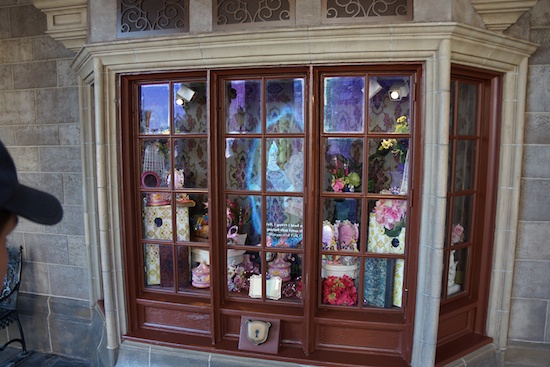 After doing this at several of the locations and furthering the story until you have defeated the bad guy, you can stop playing, or you have the option to head to another land at the park and try another storyline. If you keep your cards, you can even finish playing later that day or even later during your vacation.

Here’s a video showing parts of the game in action:

Because the game is still testing, more features and gameplay will most likely be added. As you can see on the Mickey spell card below, there are number values on each card relating to the spell’s attack, boost and shield that aren’t in use yet. We also noticed while testing that you can use more than one spell card at a time, even though nothing indicates that’s possible. Stay tuned for more details and let us know about your experience after you play. 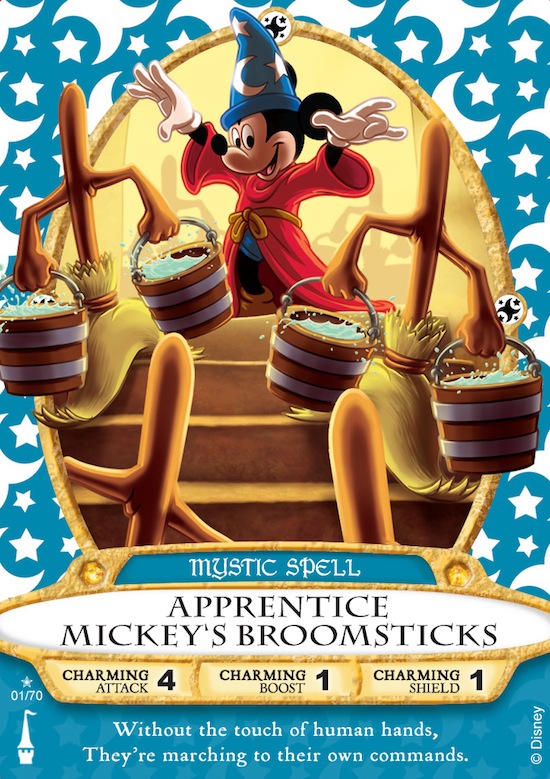 Photo Update: Many new things to see at Busch Gardens

The Festival of Chocolate is coming to MOSI in Tampa

Got our cards today and went through “training”. Went to the first check point we were given in Fantasyland and, using the “keycard”, we watched the video with my 4 year old daughter. In it, we were given a bit of the storyline and directed to other checkpoint in Fantasyland. We didn’t want to be tied to the game and we had lunch reservations elsewhere in the park so it was several hours later that we went to the second checkpoint in Fantasyland (the “frog” if you have the map) and using the keycard…NOTHING happened. We tried everything. Card forward, backward, upside down. We were disappointed that the game was “broken”.

Unfortunately their are only two “sorcerers’ training” sites in the park which are in the liberty square and main street and we would rather see and ride the attractions than do Disney’s beta testing.

It seemed like a fun game and diversion (something to do while Mommy’s in the potty…) but we were disappointed that it didn’t work.

Sorry, but this just looks disappointing after all that build up and hype. Even if there more game aspects and you can lose.. it’s just standing in front of a TV – with poor animation to boot. Seriously, couldn’t even get the look of the Tea Cups right? Hello herky-jerky Pocahontas! If i didn’t think you were lame and boring before, i certainly do now!

If it were my design i’d have had the portals open to fight “minions” who other guests in the park at other portals.

Also, having to stand so far away and having to have the speakers so loud is really off-putting for the rest of the guest experience. The most annoying aspect of KP is the beeping ringtone – the rest of the game is barely noticeable to non-players. This is the opposite – the controllers make no noise and are barely noticeable but each scene is a TV barking the storyline.

I have done the testing of this new game for the last 3 weeks. Each time I have seen new things and have found it to be fun. My son finds the spells to be funny and what happens to the villians makes him laugh. I as well find it cool and fun to do. Each stage is short, so you can play a short time or a long time…. your call. I would say give it a try and see what happens. This is still the testing phase, I can not wait till it is running in full swing.

I did not get the cards or map but did watch as the seekers found there way to each key hole while I was there I observed them , some were just going through the motions but most enjoyed it, and like anything else break downs are bound to happen, looked good to me and I’ll give it a try my next visit