The former “Murder She Wrote” show building is now fully demolished at Universal Studios Florida. Demolition began just three weeks ago, and we have photos to share of the process.

This is the view of the block on June 16, shortly after the construction walls went up. The location is near the New York City alleys, next to the lagoon.

By June 23 some of the exterior walls were coming down.

This is the same location today. 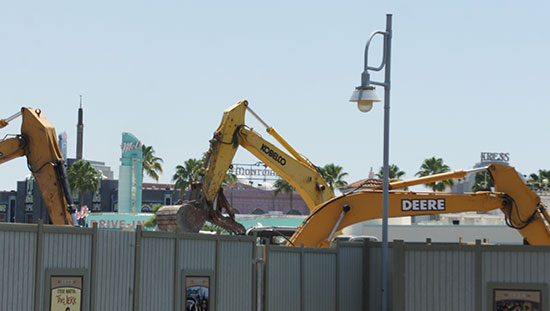 Rooftop signs in the Hollywood area are now visible from the New York City area. Construction equipment was very busy today. You can see a bucket about to descend and grab some of the debris. 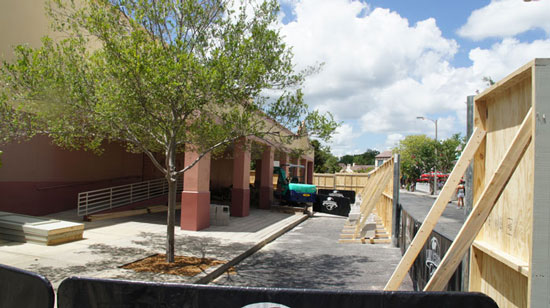 Some of the construction walls were not yet complete on June 16, allowing guests a view of the work in progress. Note the low roof area, which originally was the outdoor queue area for Murder She Wrote. Guests would watch overhead TV screens in line, as the story of the black pearl and “my girlfriend Lelani” began to be told. 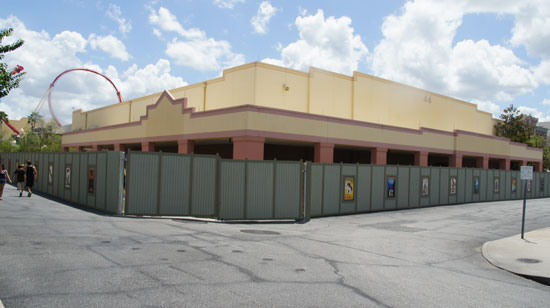 The outdoor queue wrapped along two sides of the building, as visible in this June 16 photo.

The outdoor queue was the first part of the exterior to be removed, as seen June 23. 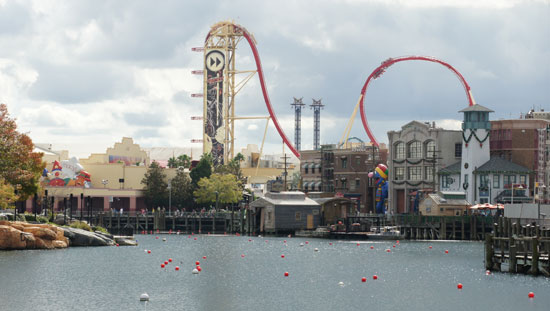 Quite a lot has changed at the lagoon in the past eight months. This view is from Dec. 10, 2011. The Stage 44 show building is seen here at left, with a Macy’s balloon on the former outdoor queue. Colored balls in the lake note locations of show elements being installed for Universal’s Cinematic Spectacular show. 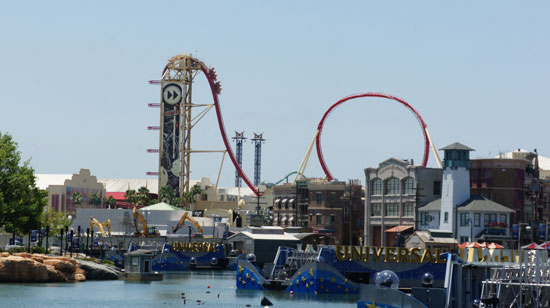 Similar view today, July 1, 2012, and the lake is now filled with show elements for the nightly lagoon show. 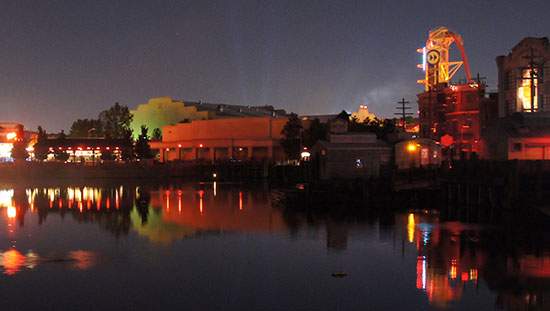 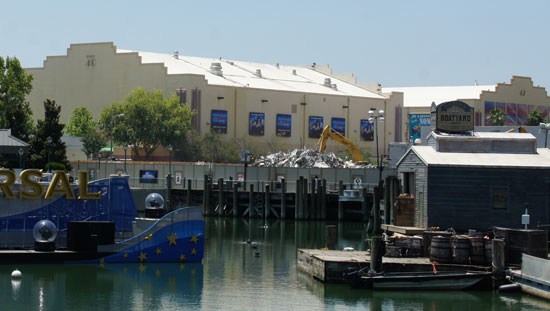 There are plenty of rumors about what will replace the soundstage. One is a Transformers attraction, similar to the recently opened one at Universal Studios Hollywood. Here’s a comparison of sites at Universal Studios Hollywood (left) and Orlando (right) from Google Maps at the same scale. Left arrow points to the new Transformers attraction in Hollywood, right arrow points to Stage 44 in Orlando. No announcement has been made yet on what will replace Stage 44. Other rumors suggest a year-round haunted house, a kids play area, or a Madagascar ride. 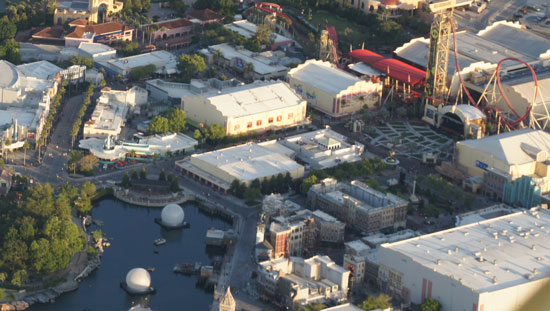 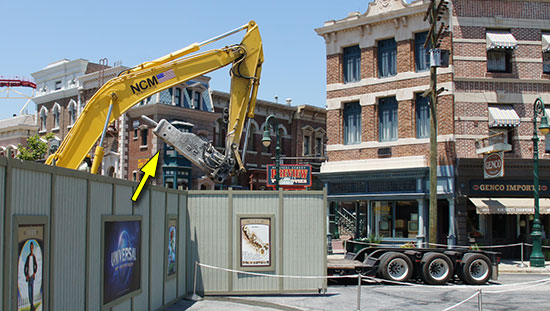 Another unusual aspect of the demolition is that heavy equipment is travelling through the park during guest hours. This is highly unusual to see in a theme park, and shows the speed at which the building is being torn down. Arrows above and below point to a large jackhammer used to break apart concrete and other heavy items. 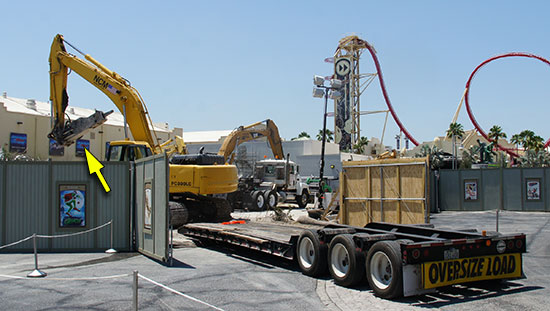 In these two photos, construction equipment has just been driven off the trailer. Note the truck at center. 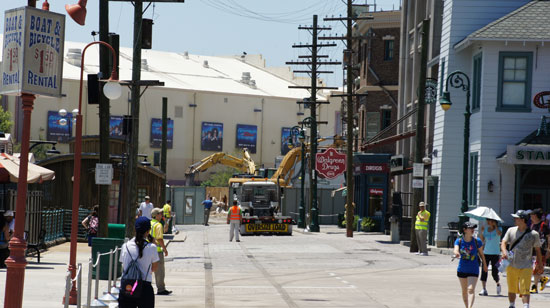 Several minutes later, the truck has been reconnected to the trailer. Team members clear the streets of guests, and the truck backs up to exit out the gate at the Beetlejuice show. 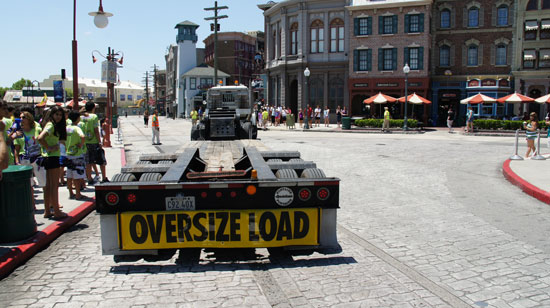 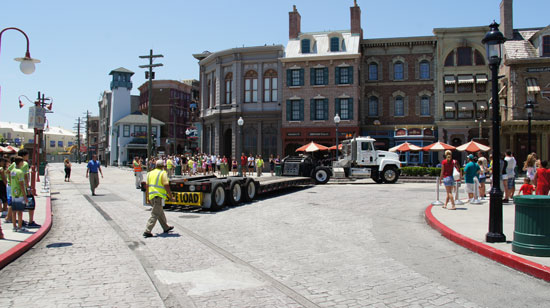 Work is starting to go above ground at the unannounced project underway at what used to be Amity Island and the Jaws ride. Rumors suggest this is where the announced Wizarding World of Harry Potter expansion will be built. 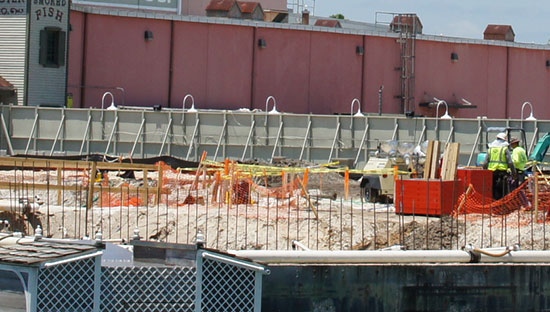 Steel rods like these usually support reinforcement for concrete walls. In the background you can see the reverse of the curved grey construction wall. 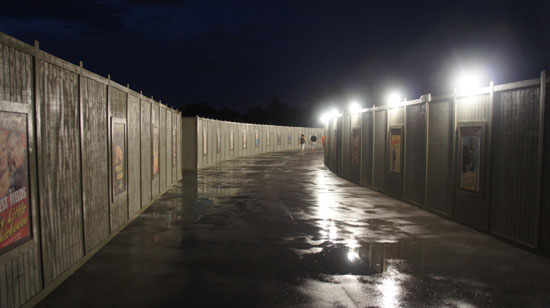 The wall shields the new curved guest sidewalk through this area. 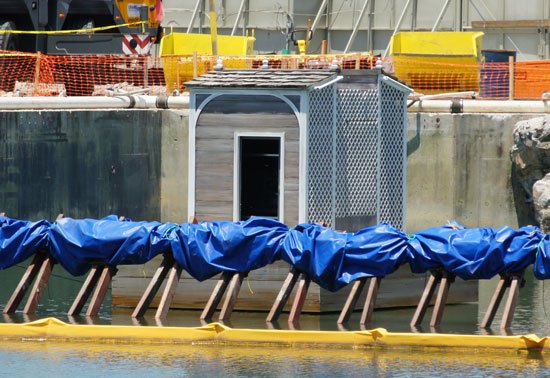 Another interesting construction detail is blue-tarp covered barrier stretching in front of the water edge. It is probably to keep construction boats and barges from drifting into the lagoon’s underwater show elements. It may also be used as a dam, to push the lagoon back. 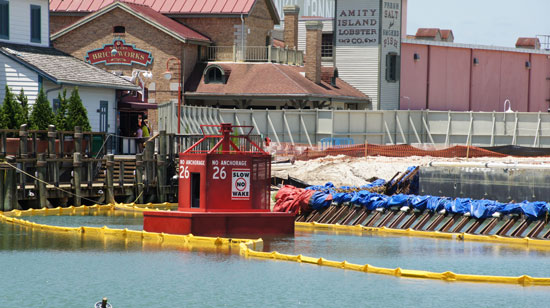 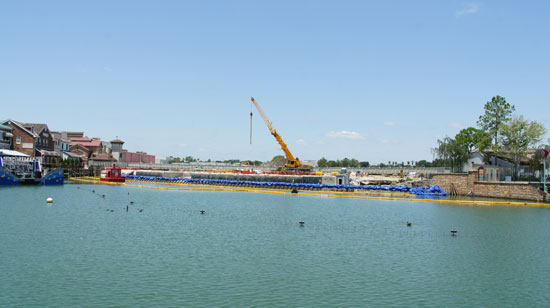 Stay tuned to Orlando Attractions Magazine to learn more about what fills the spaces on both ends of the Universal central lagoon. 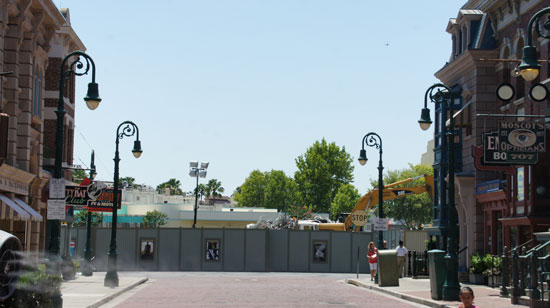 Speaking of univarsal attractions, attractions magizen can you send me a email saying if you are filming the ceremony of minon mayhem i would appreasheate it. RIP soundstage 44

Yes, we covered it. Check our other posts.