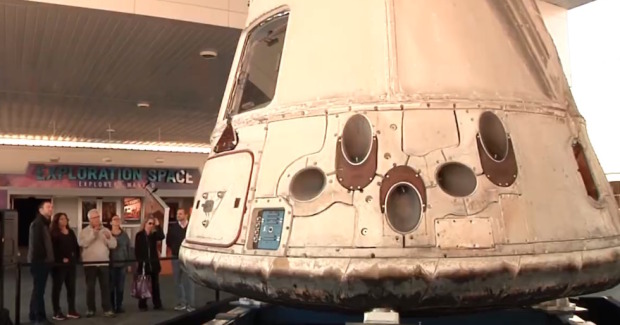 An important spacecraft is currently on display at the Kennedy Space Center Visitor Complex, but only for a limited time.

The SpaceX Dragon spacecraft that made history in May 2012 as the first commercial spacecraft to deliver cargo to and from the International Space Station (ISS) will be on display for four days only – Feb. 6 through , 2015 – at the Visitor Complex. UPDATE: The display has been extended until Feb. 16.

Since this first flight, SpaceX has completed five of 12 official ISS resupply missions for NASA. Dragon is the only spacecraft currently flying that is capable of returning significant amounts of cargo to Earth. Previously, only government spacecraft were used to deliver and retrieve cargo from the ISS.

The actual spacecraft used in May 2012 to visit the ISS will be on display at NASA Central, just outside the Visitor Complex’s Space Shop. Guests are welcome to take photos with the authentic space-flown spacecraft.

“Guests at Kennedy Space Center Visitor Complex have a rare opportunity to see up close the actual SpaceX Dragon spacecraft that made the first historic journey to the International Space Station,” said Therrin Protze, chief operating officer for Kennedy Space Center Visitor Complex. We are honored to display this remarkable spacecraft representing SpaceX’s success in resupply missions for the International Space Station and NASA.’”

The SpaceX Dragon display is included with admission to Kennedy Space Center Visitor Complex and is free for annual pass holders. Exhibit hours are 9 a.m. to 6 p.m.