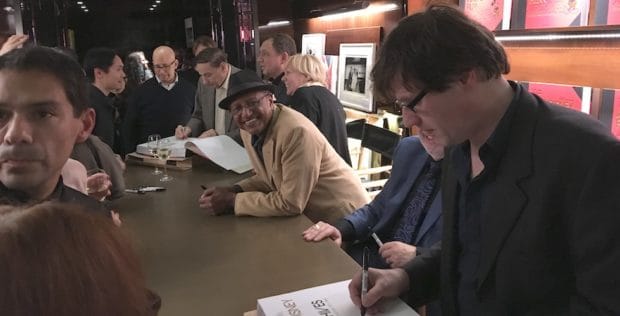 Disney animator Floyd Norman looks on as other artists and composers sign copies of “The Walt Disney Film Archives: The Animated Movies 1921-1968”. Photo by Sarah Sterling.

Last month, the Taschen Gallery in Beverly Hills celebrated the most “expansive illustrated publications on Disney animation”, titled “The Walt Disney Film Archives: The Animated Movies 1921-1968”.
The book explores all of the classic films, from “Snow White” through “The Jungle Book”. It includes more than 1,500 behind-the-scenes photos, story sketches, and cel setups spanning each of the major animated features made during Walt’s lifetime, as well as lesser-known short films, episodic musical films, and unfinished projects. 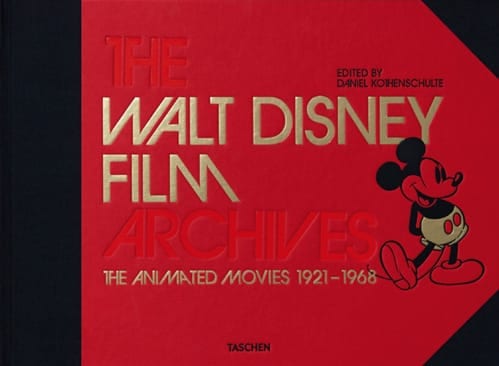 The book signing, coincidentally, took place on the 50th anniversary of Walt Disney’s passing. Maltin commented on the significance of the day: “Howard Green, who just celebrated his 40th year working for the Walt Disney Company, thought that something should be done today to commemorate the 50th year to the day, the 50th anniversary of Walt’s passing. December 15, 1966. And, I remember that day because I was home sick from school. And I heard the news on the radio. I will never forget that moment, I will never forget how I felt at that moment. Because I had grown up on Disney. We didn’t know Disney as a corporate name, we didn’t know it as a logo. We knew Walt Disney because we saw him every week in our homes on television. We responded to him, the actual man, who made all of this incredible entertainmnet and who was such a visionary in so many ways. So, it was a very, very shocking, very sad day. But I’m not sad today, because his legacy does continue. And because people like you (points to Kotehnschulte) are continuing to find new facets of Disney’s career to explore and illustrate and analyze.”

It was a beautiful evening celebrating Disney history, and a gorgeous book exploring the Walt Disney Company’s achievements in art and entertainment. Kotehnschulte stated that he was proud to not only have worked alongside Maltin to create this book, but also explained, “I will never ever forget that I am hosting an event that Richard Sherman is at.”

“The Walt Disney Film Archives: The Animated Movies 1921-1968” 620 page hardcover book is available through Amazon.com for $152.50. It was edited by Daniel Kotehnschulte and produced with the assistance of the Walt Disney Archives and the Disney Animation Research Library.

This year is The Jungle Book’s 50th anniversary, which means Disney should release a signature edition for the movie.