Nickelodeon is commemorating 20 years of “SpongeBob SquarePants” with the “Best Year Ever,” a tribute to one of the most iconic animated TV series ever created. 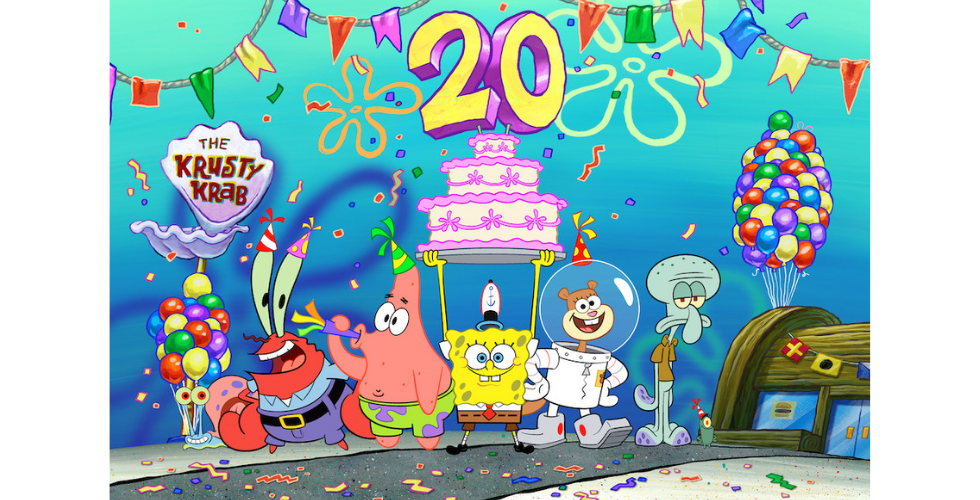 Celebrate 20 years of SpongeBob SquarePants with the “Best Year Ever.”

SpongeBob made his debut on the small screen on July 17, 1999, and has since been the number-one kids’ animated series on television for the last 17 years. As a result, the porous pal has generated a multitude of pop culture quotables, memes, theatrical releases, consumer products, a Tony award-winning Broadway musical, theme park attractions, and a global fan base.

The “Best Year Ever” begins on Friday, July 12, with the premiere of “SpongeBob’s Big Birthday Blowout,” an original live-action and animated special. This will lead to the Paramount Pictures and Nickelodeon Movies theatrical release of “The SpongeBob Movie: It’s a Wonderful Sponge,” which hits theaters in the summer of 2020.

“The tiny residents of Bikini Bottom have held the world’s attention for a remarkable 20 years and we owe it all to the monumental creator Stephen Hillenburg,” said Ramsey Naito, executive vice president of animation production and development for Nickelodeon. “This anniversary special is a love letter to everyone in the universe of SpongeBob, from the fans across the globe to the incredible creative team, crew, and talent who continue to bring these great characters to life.”

In the TV special, it’s SpongeBob’s birthday, and viewers will get to see the voice actors behind SpongeBob, Patrick, Mr. Krabs, Sandy, Squidward, and Plankton, who will play live-action doppelgänger versions of their characters. The synopsis of the special reads:

Patrick and SpongeBob journey to the surface world, where they come across a few familiar characters during lunchtime rush at the Trusty Slab restaurant. Meanwhile, the Bikini Bottom residents set up a surprise party for SpongeBob.

Plans are also in the works for spin-offs featuring the core characters from “SpongeBob SquarePants” in their own series, specials, and feature-length films.

In the parks, guests visiting Universal Orlando Resort can see SpongeBob and friends in Universal’s Superstar Parade, as well as meet them in SpongeBob StorePants in Woody Woodpecker’s KidZone.

At Universal Studios Hollywood, guests can meet their favorite undersea friends at character meet-and-greets, as well as shop their merchandise at the Animation Studio Store.

A new Nickelodeon-themed indoor theme park planned for the Mall of China will also feature SpongeBob SquarePants attractions when it opens in December 2020.

To learn more about SpongeBob SquarePants, head to Nick.com.

Disney Fantasy to embark on special Bahamian cruise this August

A look at how the international Disney...